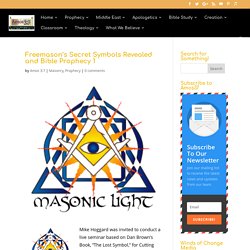 During that seminar, he covered numerous topics that did not make it into any of other videos. Freemason’s Secret Symbols Revealed and Bible Prophecy 2010 Prophecy Seminar Part 1 of 3 In this 3-part Prophecy Seminar, you will see topics such as the true foundations of America’s beginnings, the identification of Washington, D.C., as a pagan high place and new discoveries about Bible Numerics. At the end of the seminar, Pastor Mike addresses the issue most people had on their mind: America is very, very close to crossing that Judgment Line with God.

Freemason’s Secret Symbols Revealed and Bible Prophecy And this is the condemnation, that light is come into the world, and men loved darkness rather than light, because their deeds were evil. The Underworld Life After Death in Ancient Greeks. Greek mythology stories series-3. 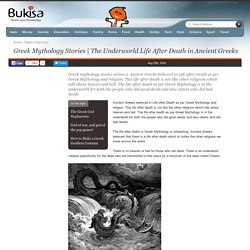 The life after death in Greek Mythology is interesting. There is no heaven or hell for those who are dead. Image resource. Phantoms and Monsters: Pulse of the Paranormal. Over the years, I have received reports of alien implanted objects, seeded tumors and the transmission of chronic and terminal diseases. 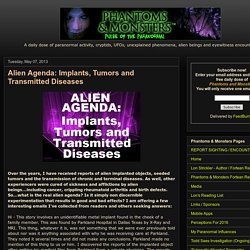 As well, other experiencers were cured of sickness and afflictions by alien beings...including cancer, crippling rheumatoid arthritis and birth defects. So...what is the real alien agenda? Is it simply non discernible experimentation that results in good and bad effects? I am offering a few interesting emails I've collected from readers and others seeking answers: Rabbi Jonathan Cahn and the Smile of Satan. Clement PulaskiDaily Stormer May 9, 2014 Jewish huckster Jonathan Cahn. 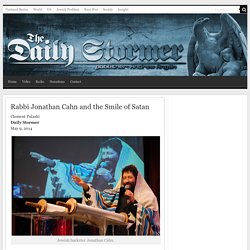 Rabbi Jonathan Cahn recently made headlines at a kosher conservative event called Washington: A Man of Prayer, 2014. At the prayer meeting, hosted by Mike Huckabee and Michelle Bachmann, Cahn declared that America has lost the smile of heaven by disregarding God’s standards of morality. 5 Things People Believe About Demons, Exorcisms and The Spirit World. The ancient Celts believed that in late October, on the night that marked the end of the summer season, the boundaries between the living and the dead blurred and ghosts returned to walk on the earth. 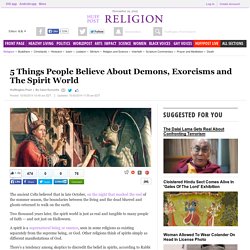 Two thousand years later, the spirit world is just as real and tangible to many people of faith -- and not just on Halloween. A spirit is a supernatural being or essence, seen in some religions as existing separately from the supreme being, or God. Are Mirrors Portals to the Spirit World? There is nothing quite as eerie as the thought of seeing a reflection in the mirror that isn't your own, yet many claim to have seen just that. 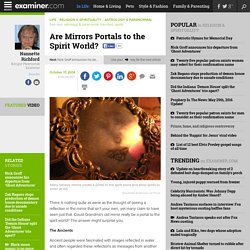 Could Grandma's old mirror really be a portal to the spirit world? The answer might surprise you. The Ancients Ancient people were fascinated with images reflected in water and often regarded these reflections as messages from another realm. Distortions in water currents were interpreted as reflections of future and past events. Why The Antichrist Must Come Soon! Why Anti-Christ Must Come Soon! 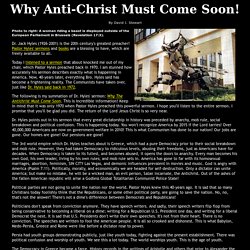 By David J. Stewart Photo to right: A woman riding a beast is displayed outside of the European Parliament in Brussels (Revelation 17:3). Dr. God’s presence is a consuming fire. Our God is so good that even though we mess up, He makes a way for us to have relationship with Him. 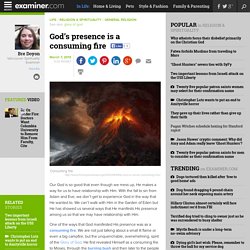 With the fall to sin from Adam and Eve, we don’t get to experience God in the way that He wanted to. We can’t walk with Him in the Garden of Eden but He has showed us several ways that He manifests His presence among us so that we may have relationship with Him. One of the ways that God manifested His presence was as a consuming fire. We are not just talking about a small lit flame or even a big campfire, but the unquenchable, overwhelming, spirit of the Glory of God. Harbinger Author - Now Is The Time To Prepare. Harbinger Author - Now Is The Time To Prepare August 24, 2015 | Leo Hohmann Share this article Author and Bible teacher Jonathan Cahn says he has been so swamped with questions and concerns about the looming end of the Shemitah year on Sept. 13 that he can’t answer them all. 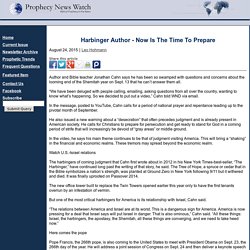 “We have been deluged with people calling, emailing, asking questions from all over the country, wanting to know what’s happening. So we decided to put out a video,” Cahn told WND via email. In the message, posted to YouTube, Cahn calls for a period of national prayer and repentance leading up to the pivotal month of September. He also issued a new warning about a “desecration” that often precedes judgment and is already present in American society. Simmons Opinions. In part one, I discussed my thoughts on why I believe we are in the “end times” predicted thousands of years ago in The Bible. 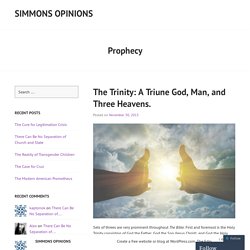 In part two, I offered possibly pathways to explaining away the Rapture and reaching the one-world government, currency, and religion. In this section, I hope to deal with the person known as the “Man of Sin” or Antichrist. First off, war is brewing. Not local skirmishes like we see happening right now, but a large scale world war. After all, how else can we achieve peace if it is not brought about through chaos? Revelation: The Seven Trumpets and When They Shall Sound. Things that Must Happen Before the Coming of Christ … A Challenge to Benny Hinn’s five purported things: By Enwelu M Hananayah. War prophecy. In this world, there are only two forms of government: God’s and Satan’s. God has twelve Heavenly Commandments and the Royal Perfect Laws of Liberty and Satan has 12 million or so rules of oppression piled up in his. God has a fair and sustainable economic policy; and Satan aims at keeping his unjust and destructive. The world is at a crossroads, with Satan’s motto “No flesh left alive” and God’s Promise of Judgment.

Is mankind ready to believe yet? Through Satan’s ACRONYM bodies, such as the UN, RIIA, CFR, G7, G20, IMF, WHO, INC, CORP and all the other prototypical ORGANS and numbers in his body, the world is in a noose or death-spiral, or more accurately described as “on the edge of nuclear destruction”. DEMONOLOGY. By David J. Stewart | August 2013 | Updated January 2015. Fellowship of the Minds. President Lucifer hits seven for seven! You can only achieve this if you’ve had a lot of practice! Obama's Throne Of Satan (Pergamon Altar) in Revelation 2. “Seat” or Throne of Satan.

Revelation 2:12-13 Pergamon Altar @ the Pergamon Museum in Berlin Ishtar Gate from Babylon (also @ the Pergamon Museum in Berlin): Heavenly Reward: Are You Ready For The Judgment Seat Of Christ As A Raptured Saint? 10 Doomsday Cults. January Wolf Moon Werewolf Warning. CURSED/911 BABBIES. What Happens When You Die? - by Dr. David R. Reagan. By Dr. David ReaganLamb and Lion Ministries If several years ago you had asked me what happens when you die, I would have given you a pathetic answer.

I would have told you that when you die your soul goes to sleep until the Lord returns. At the return of the Lord, your soul is resurrected and judged, and you are either consigned to Hell or allowed to enter Heaven. My conception of Heaven was that of a spirit world where the saved spend eternity as disembodied spirits, floating around on clouds, playing harps. A Mistaken View. The Prophecy Watchers. Time To Open the Gates of Hell? CERN: Large Hadron Collider Discovers 'Very E...

(Before It's News) The Key to the Bottomless Pit, Top World Researchers are attempting to open other dimensions. 2014 God Particle Project: Opening A Bottomless Pit to Hell Now! What Does The Royal Society And The Vatican Have In Common? By Thomas R. Horn April 22, 2010 NewsWithViews.com. End Times Research Ministry. Prophecy Sign: “There is no faithfulness, no love, no acknowledgment of God in the land. There is only cursing, lying and murder, stealing and adultery; they break all bounds, and bloodshed follows bloodshed.

Supernatural Symbols - Planetary Seal of Saturn. Travel - Slideshow - Mother Nature at her most powerful. The City Under The Sea. Israel's Promise and Being Grafted In... - Doctrinal Questions - Worthy Chris... THE UFO CHRONICLES : June 2011. Church of God's Faithful: Faithful Watchman. UFO's, Aliens, Fallen Angels,End Times. Why Was The Vilna Gaon Fasting On July 4, 1776? Torch: Torah Weekly. The World Is About To Be Changed….Forever! - SagacityWeb. Pestilences and Plagues. The Covenant of God. Session_1.The_Unseen_Realm.doc. Site:LRP:Documented News and Information Pertaining to Research LXXII. Will Christians be snookered by Shemitah? - Stand Up For The Truth. ‘Blood Moons’ revelations rock TV audience. The Coming Shemitah & Jubilee Year 5774/5. Dee Finney's blog  April 17, 2014 - page 666 THE RABBI'S PROPHECY FOR 2014 AN...