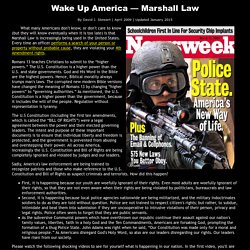 Stewart | April 2009 | Updated January 2015 What many Americans don't know, or don't care to know (but they will know eventually when it is too late) is that Marshall Law is increasingly being used in the United States. Every time an officer performs a search of your person or property without probable cause, they are violating your 4th Amendment rights.

Watch True Legends: Technology of the Fallen Online. Allthecounselofgod. Antichrist. The Antichrist is a Christian concept based on interpretation of passages in the New Testament, in which the term "antichrist" occurs five times in 1 John and 2 John, once in plural form [1] and four times in the singular. [2] Etymology[edit] Christian views[edit] New Testament[edit] Whether the New Testament contains an individual Antichrist or not is disputed. 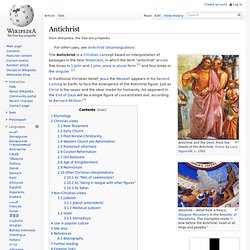 The five uses of the term "antichrist" or "antichrists" in the Epistles of John do not clearly present a single latter-day individual Antichrist. 'Strange signs' on Shemitah's final days. Snooper's Take Our Country Back - Journal - Behold! A Pale Horse. The Countries of Prophecy Are All Aligned- Prophecy Signs for October 24, 201... Frank DiMora P.O. 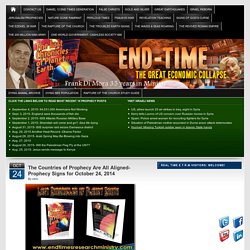 Box 732, Lompoc Ca. 93436 fjdimora@gmail.com Bible prophecy documentary book download proving our generation will see the return of the Lord. Do you want to know what is going to happen in the future before it actually takes place? The Word of God provides you with specific details about our future and all of these things are coming to pass in this generation.

If you aren’t saved yet this is a must read! I must caution you: there are links used to report events below that you should use extreme caution in viewing- they are anti-Israel sites and Arabic media sites. 2013 July. 2 Timothy 3:1-5 – This know also, that in the last days perilous times shall come. [2] For men shall be lovers of their own selves, covetous, boasters, proud, blasphemers, disobedient to parents, unthankful, unholy, [3] Without natural affection, trucebreakers, false accusers, incontinent, fierce, despisers of those that are good, Signs of the End of the World – 2013 and the Bible Last Days | signs-of-end-times.com | Biblical signs of the end of the world, showing we are living in the last days in 2013 and the Bible second coming of Christ Jesus is near.4 Traitors, heady, highminded, lovers of pleasures more than lovers of God; 5 Having a form of godliness, but denying the power thereof: from such turn away. 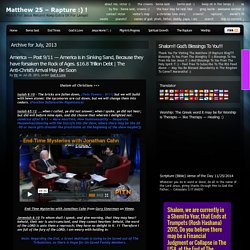 Art used by permission by Pat Marvenko Smith, copyright 1992. Watchman on the Web. Serious Topics for Serious Christians. Home - Website of Christianladybug. Learn Scripture, Personally Grow, Inspire Others. Hollywood satanic cult. False flags often describe covert operations designed to deceive in such a way that the operations appear as though they are being carried out by individuals, entities, groups, or nations other than those who actually planned and executed them.[2] The Strategy of Tension is basically a concept for control and manipulation of public opinion through the use of fear, propaganda, agents provocateurs, terrorism, etc. 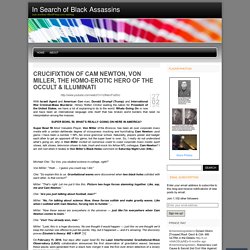 The aim is to instill fear into the populace while framing political and targeted opponents, groups for terrorist activities and atrocities.[3] In America, all the signs and symbols of false flags and strategy of tension are there to see if your EYES AREN’T WIDE SHUT. Muhammad Abdulazee, left, has almost virtually the same silly “MK ULTRA SMILE” as the Mad Batman Colorado Theater Shooter Pasty, James Egan Holmes. God Talks To You. How to Pray for the Persecuted Church. Around the world, many believers are persecuted -- imprisoned, even killed -- for their faith. 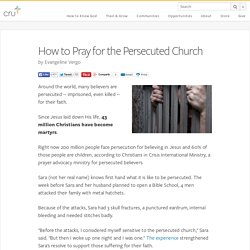 Since Jesus laid down His life, 43 million Christians have become martyrs. Right now 200 million people face persecution for believing in Jesus and 60% of those people are children, according to Christians in Crisis International Ministry, a prayer advocacy ministry for persecuted believers. Sara (not her real name) knows first hand what it is like to be persecuted. The week before Sara and her husband planned to open a Bible School, 4 men attacked their family with metal hatchets. Because of the attacks, Sara had 3 skull fractures, a punctured eardrum, internal bleeding and needed stitches badly. "Before the attacks, I considered myself sensitive to the persecuted church," Sara said. Hamath is confounded - Turkey attacks Damascus - Jer 49. Intelligence reports reach Hamath By Craig C. 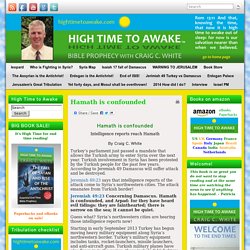 White Turkey’s parliament just passed a mandate that allows the Turkish army to enter Syria over the next year. Turkish involvement in Syria has been protested by the Turkish people for the past few years. According to Jeremiah 49 Damascus will suffer attack and be destroyed. Jeremiah 49:23 says that intelligence reports of the attack come to Syria’s northwestern cities. Jeremiah 49:23 Concerning Damascus. Guess what? Starting in early September 2013 Turkey has begun moving heavy military equipment along Syria’s northwestern border. We have been told that Syria may have used chemical weapons, and that justifies overthrowing the Syrian government.

I suspect that intelligence reports of a gathering attack will continue to increase. Read this article at abc news. Turkey Renews Permit to Send Troops to Syria Read this article at Bloomberg Turkey Reinforces Syria Border as Erdogan Backs U.S. Gog of Magog (Part 1) Joel Richardson, WND The prophecy of Ezekiel 38 and 39, often referred to as the Battle of Gog and Magog, is hands-down one of the most important and influential end-time prophecies in all of Scripture. 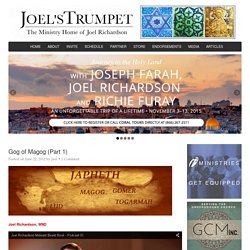 But it is also one of the most controversial and widely misunderstood prophecies. Throughout the Church today, a vast number of Christians believe that Ezekiel 38 and 39 predicts a Russian-led invasion of Israel in the last days. Ever since the release of the Scofield Reference Bible, this view has been echoed in dozens upon dozens of prophecy books, in thousands of end-time sermons, and today in countless online end-time discussion forums and articles. 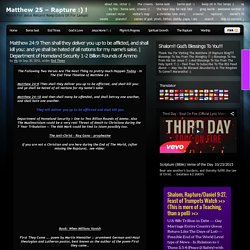 Matthew 24:10 And then shall many be offended, and shall betray one another, and shall hate one another. They will deliver you up to be afflicted and shall kill you:Department of Homeland Security = One to Two Billion Rounds of Ammo. What Does the Bible Say About Weather In The Last Days? OpenBible.info Geocoding Topical Bible Realtime Labs Blog What does the Bible say about ? 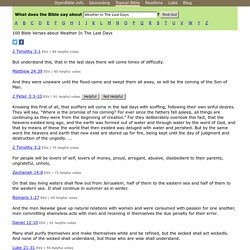