How do teachers determine letter grades and GPAs from standards? (Standards-Based Grading) The purpose of standards-based grading/reporting is to communicate students’ current strengths and areas for improvement relative to course or grade-level standards. 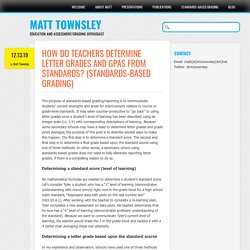 It may seem counter-productive to “go back” to using letter grades once a student’s level of learning has been described using an integer scale (i.e. 1-4) with corresponding descriptions of learning. Because some secondary schools may have a need to determine letter grades and grade point averages, the purpose of this post is to describe several ways to make this happen. The first step is to determine a standard score. The second and final step is to determine a final grade based upon the standard scores using one of three methods. 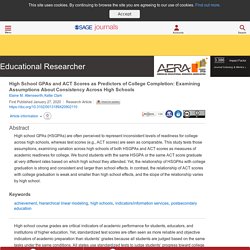 Yet, standardized test scores are often seen as more reliable and objective indicators of academic preparation than students’ grades because all students are judged based on the same tasks under the same conditions. All states use standardized tests to judge students’ progress toward college readiness goals, with 45 states using ACT or SAT scores (Nayar, 2015). The use of standardized test scores to monitor students’ college readiness is recommended clearly in the What Works Clearinghouse practice guide on how to prepare students for college, whereas HSGPAs are discussed as one piece of performance data to consider, along with curriculum and assessments (Tierney et al., 2009). A key assumption behind the emphasis on test scores in policy and practice is that college entrance exams are strong and consistent measures of readiness. Research Methods Note. Antiracist Writing Assessment Ecologies - Teaching in Higher Ed. Study finds notable increase in grades in high schools nationally. 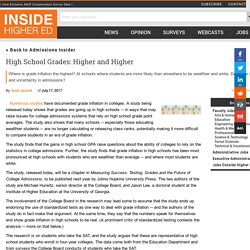 A study being released today shows that grades are going up in high schools -- in ways that may raise issues for college admissions systems that rely on high school grade point averages. The study also shows that many schools -- especially those educating wealthier students -- are no longer calculating or releasing class ranks, potentially making it more difficult to compare students in an era of grade inflation. The study finds that the gains in high school GPA raise questions about the ability of colleges to rely on the statistics in college admissions.

Further, the study finds that grade inflation in high schools has been most pronounced at high schools with students who are wealthier than average -- and where most students are white. The study, released today, will be a chapter in Measuring Success: Testing, Grades and the Future of College Admissions, to be published next year by Johns Hopkins University Press. Improving Assessment and Placement at California’s Community Colleges. By Olga Rodríguez Every year, California’s community colleges identify hundreds of thousands of students as not ready for transfer-level courses in math and English. 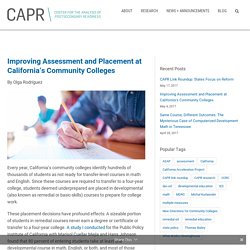 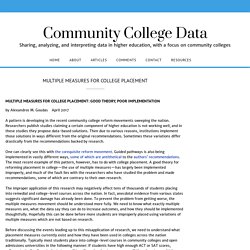 Goudas April 2017 A pattern is developing in the recent community college reform movements sweeping the nation. Researchers publish studies claiming a certain component of higher education is not working well, and in these studies they propose data-based solutions. Then due to various reasons, institutions implement those solutions in ways different from the original recommendations. Sometimes these variations differ drastically from the recommendations backed by research.

One can clearly see this with the corequisite reform movement. The improper application of this research may negatively affect tens of thousands of students placing into remedial and college-level courses across the nation. The Schoenblog: Student Reflections & Self-Assessments. Instead of spending my time on grading, I want to use it to give stronger feedback, help students grow, and build better relationships. 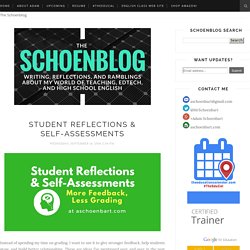 These are ideas I’ve mentioned over and over in the past few months of writing, and I’m ready to bring them to practice. I’ve explored research and articles on the value of students’ self-assessing and reflecting on their progress, and decided to start the second week of classes with students making arguments for their own grades. In the long run, I want to move away from traditional grading but am still trying to find balance as I learn more about effective systems and practices. Multiple Measures Assessment Project. The Multiple Measures Assessment Project (MMAP) is a collaborative effort led by the RP Group and Educational Results Partnerships’ Cal-PASS Plus system, with support from the CCCCO. 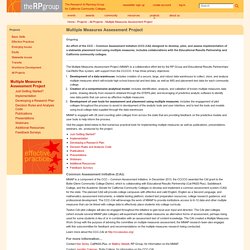 It has three primary objectives: MMAP is engaged with 28 (and counting) pilot colleges from across the state that are providing feedback on the predictive models and user tools to help inform the process. Visit the pages listed below to find numerous practical tools for implementing multiple measures as well as publications, presentations, webinars, etc. produced by the project. Common Assessment Initiative (CAI): School Testing 2016: Same Tests, Different Stakes : NPR Ed.

Oivind Hovland/Ikon Images/Corbis It has been a high-stakes year for high-stakes standardized tests. 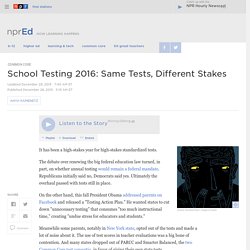 The debate over renewing the big federal education law turned, in part, on whether annual testing would remain a federal mandate. Republicans initially said no, Democrats said yes. Ultimately the overhaul passed with tests still in place. On the other hand, this fall President Obama addressed parents on Facebook and released a "Testing Action Plan. " Cal State Coming Clean About Math Test's Limitations  California State University has done many things right in the twenty years since it became one of the nation's first universities to take on the challenge of remedial education. 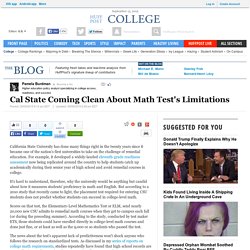 Here's what happened when these colleges ditched SAT scores - Sep. 8, 2015. A growing number of schools -- about 850 and counting -- no longer require applicants to submit their scores. 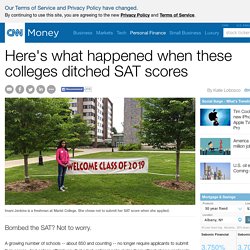 And college officials say that a test-optional policy helps them attract strong applicants that may not have previously applied -- including students of color, and those from low income families. Data shows tests like the SAT are biased against students from low-income households. Poorer students tend to perform worse on the test. The difference might be the costly prep courses, books and tutors, some experts say. Blacks and Hispanics also consistently score lower on the SAT than whites. The new thinking is that dropping the SAT requirement might encourage more low-income students to apply. While the academic research is mixed, some of the schools that implemented the policy early on have seen big changes in their student bodies. Related: George Washington University is ditching SATs Related: How I got into an Ivy League school Not all colleges have seen the same changes. 7 Things to Remember About Feedback - Eli Review.

College Applicants Sweat The SATs. Perhaps They Shouldn't. Standardized tests are an important consideration for admissions at many colleges and universities. Art%3A10.1007%2Fs11251-011-9177-2.pdf?originUrl=