Poet: I can’t answer questions on Texas standardized tests about my own poems. Sara Holbrook. 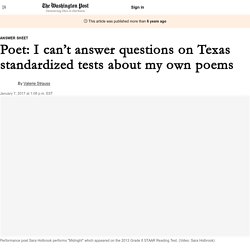 (Jennifer Hearn) Badly worded or poorly conceived questions on standardized tests are not uncommon (remember the question about a “talking pineapple” on a New York test in 2012?). But here’s something new: The author of source material on two Texas standardized tests says she can’t actually answer the questions about her own work because they are so poorly conceived. She also says she can’t understand why at least one of her poems — which she calls her “most neurotic” — was included on a standardized test for students. The author is Sara Holbrook, who has written numerous books of poetry for children, teens and adults, as well as professional books for teachers. In this amusing but sobering post, Holbrook writes about the episode. The tests on which Holbrook’s poems appeared are the STAAR, the State of Texas Assessments of Academic Readiness. By Sara Holbrook Let me begin by confessing that “A Real Case” is my most neurotic poem. Seriously?

I apologize to those kids. A Gentleman's 'B+' We're smart, we're talented, and doggone it, people like us (or at least we like ourselves). 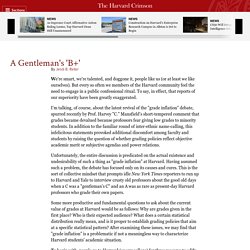 But every so often we members of the Harvard community feel the need to engage in a public confessional ritual. To say, in effect, that reports of our superiority have been greatly exaggerated. I'm talking, of course, about the latest revival of the "grade inflation" debate, spurred recently by Prof. Harvey "C. " Mansfield's short-tempered comment that grades became devalued because professors fear giving low grades to minority students. Unfortunately, the entire discussion is predicated on the actual existence and undesirability of such a thing as "grade inflation" at Harvard.

Some more productive and fundamental questions to ask about the current value of grades at Harvard would be as follows: Why are grades given in the first place? Some have argued that a student will only work hard and truly learn the material if he knows he is being graded. Dump Performance Appraisals... and Help Employees Be Their Best  When I talk to business leaders, employee performance and engagement are top priorities. 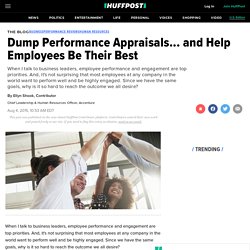 And, it's not surprising that most employees at any company in the world want to perform well and be highly engaged. Since we have the same goals, why is it so hard to reach the outcome we all desire? At the heart of this complex issue is the notion of performance management. If we deconstruct these two words, it's understandable why the process of "managing" performance is ineffective at helping people achieve their best. When we hire great people, we should trust them and give them the freedom to innovate -- rather than managing, measuring and administering a process. At Accenture, we're on a journey to revolutionize how we help our people be their best. Understand expectationsBuild on their strengthsUnderstand areas for growthAchieve their career aspirations​ Performance Achievement is highly personal and future-focused.

"Performance is an ongoing activity. Creating Student Interest. Psychology instructors often encounter their students years later, and the bravest among us may ask them what they remember from our courses. 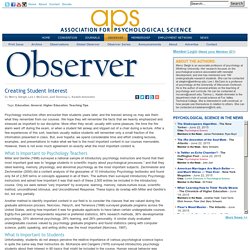 We hope they will remember the facts that we heavily emphasized and stressed as important to our discipline. More often they recall, usually with some pleasure, the time the fire alarm went off during the exam, or when a student fell asleep and slipped out of a chair during a lecture. After a few experiences of this sort, teachers usually realize students will remember only a small fraction of the information presented in class. But, ever hopeful, we spend considerable time and effort creating lectures, examples, and presentations to make what we feel is the most important content in our courses memorable. However, there is not even much agreement on exactly what the most important content is. Henry L. Roediger & Jeff Karpicke - ScienceWatch.com.

Why do you think your paper is highly cited? 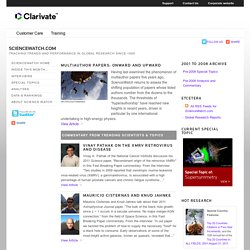 Our paper is probably highly cited for several reasons. First, it shows a surprising finding (that being tested on material can produce greater gains in later retention than re-studying the material); second, the research has educational implications; third, the materials used were more educationally relevant than is often the case in psychology research on human memory; fourth, a number of cognitive psychologists have recently become interested in testing as a means for learning; and fifth, the article was published in Psychological Science, the most important journal for scientific psychology, which goes to all 18,000 members of the Association for Psychological Science.

Does it describe a new discovery, methodology, or synthesis of knowledge? The paper comes closest to describing a new "discovery. " Our results extended some earlier findings to prose materials of the sort that might be used in the classroom. Henry L.