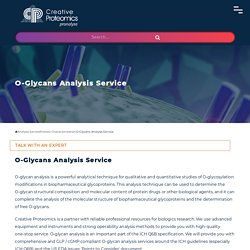 This analysis technique can be used to determine the O-glycan structural composition and molecular content of protein drugs or other biological agents, and it can complete the analysis of the molecular structure of biopharmaceutical glycoproteins and the determination of free O-glycans. Creative Proteomics is a partner with reliable professional resources for biologics research. O-Glycans Analysis Service. Near UV Circular Dichroism Spectroscopy Analysis. Circular dichroism (CD) spectroscopy is a fast, simple, and accurate method for studying protein structures in dilute solutions. 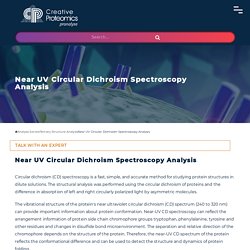 The structural analysis was performed using the circular dichroism of proteins and the difference in absorption of left and right circularly polarized light by asymmetric molecules. The vibrational structure of the protein's near ultraviolet circular dichroism (CD) spectrum (240 to 320 nm) can provide important information about protein conformation. Near-UV CD spectroscopy can reflect the arrangement information of protein side chain chromophore groups tryptophan, phenylalanine, tyrosine and other residues and changes in disulfide bond microenvironment. Far UV Circular Dichroism Spectroscopy Analysis. Circular dichroism (CD) spectroscopy is a fast, simple, and accurate method for studying protein structures in dilute solutions. 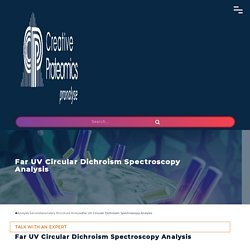 The structural analysis was performed using the circular dichroism of proteins and the difference in absorption of left and right circularly polarized light by asymmetric molecules. The CD spectrum of the far ultraviolet region mainly reflects the circular dichroism of peptide bonds. In the regular secondary structure of proteins or peptides, peptide bonds are highly regularly arranged. The orientation of its arrangement determines the splitting of the peptide bond energy level transition. The positions and absorption strengths of the CD bands generated by proteins or peptides with different secondary structures are different. Nuclear Magnetic Resonance (NMR) Pharmaceutical Analysis. Nuclear magnetic resonance technology can be used as a conventional structural analysis method to determine the solution structure and dynamics of biological macromolecules and their complexes. 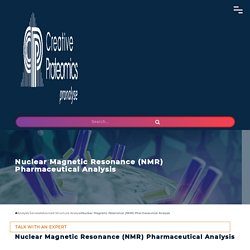 We Can Provide but Not Limited: Amino Acid Analysis Service. Amino acid analysis is an important biochemical technique at all stages of drug discovery. 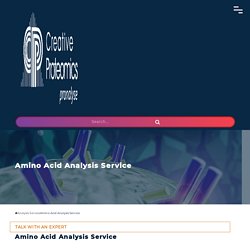 This method can be used to determine the amino acid composition and content of protein (polypeptide) drugs or other biological agents, to determine the primary or secondary structure of protein (polypeptide), and also to quantify free amino acids. Creative Proteomics is a reliable partner of biopharmaceuticals. Amino Acid Composition Analysis Service. Amino acids are a group of chemically diverse organic compounds. 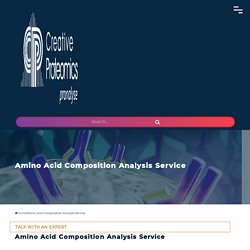 The amino acid composition will determine the quality of polypeptides or proteins. As the requirements defined by the United States Pharmacopeial Conventin (USP), European Pharmacopoeia (Ph. Eur.), and other regulatory agencies, the qualitative and quantitative composition of medicines has to be determined. MALDI-TOF-MS Intact Protein Analysis. The development and quality assessment of biopharmaceuticals, especially protein and peptide drugs, require a series of analytical techniques to assess the integrity of bioactive molecules during formulation and administration. 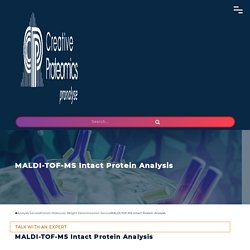 MALDI-TOF-MS provides accurate mass measurement and high-throughput analysis of intact biomolecules ranging from 1 to 100 kDa. This technique can reveal detailed structural information at the molecular level through ion fragments of small molecule samples in 5 minutes. Compared to ESI-MS technology, MALDI-TOF produces fewer multi-charged ions and allows full-spectrum analysis of protein samples without additional deconvolution steps. This method is particularly suitable for determining the chemical modification of proteins and peptide drugs and for identifying the covalent interaction between protein and peptide bioactive substances in polymer drug formulations. 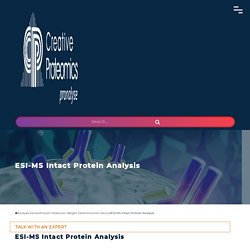 The product ions of multi-charged precursor ions can also provide more structural information than the product ions of single-charged precursor ions. Electrospray ionization mass spectrometry not only can obtain accurate molecular weight of compounds, but also can be used for quantitative and qualitative analysis of trace or trace biologically active molecules. It is also suitable for studying weak bond interactions. Combined with collision-induced dissociation technology, electrospray ionization mass spectrometry can also be used for structural analysis, reaction mechanism, and non-covalent bonding capabilities. Schematic diagram of the main process of ionization We Provide but Not Limited to: Plant Secondary Metabolites Analysis Service. Metabolism in living matter may be described as a large group of enzyme-controlled and regulated chemical reactions that produce energy in the form of ATP, produce substances needed for growth and the development of tissues, and help the organism to survive in different circumstances. 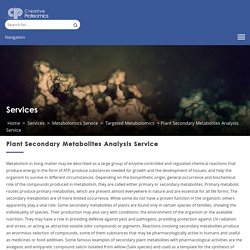 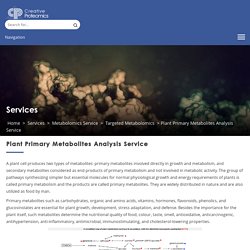 The group of pathways synthesizing simpler but essential molecules for normal physiological growth and energy requirements of plants is called primary metabolism and the products are called primary metabolites. They are widely distributed in nature and are also utilized as food by man. Primary metabolites such as carbohydrates, organic and amino acids, vitamins, hormones, flavonoids, phenolics, and glucosinolates are essential for plant growth, development, stress adaptation, and defense. Flavonoids Analysis Service. Flavonoids (C6–C3–C6) can be classified in different subclasses (flavones, flavanones, flavonols, isoflavones, flavanonols, flavanols, chalcones and anthocyanins) according to the degree of unsaturation and degree of oxidation of the 3-carbon skeleton.

Subclasses of flavonoids can be further differentiated on the basis of the number and nature of substituent groups attached to the rings. Flavonols and anthocyanins are the main subclasses of flavonoids present in plants. Plant Hormone Analysis Service. Plant hormones (phytohormones) are long time known as important components of signaling cascades in plant development and plant responses to various abiotic and biotic challenges. Plants, unlike animals, lack glands that produce and secrete hormones.

The nonpeptide plant hormones are structurally unrelated small molecules. Platform Summary Sample Requirement. Carotenoids Analysis Service. Carotenoids are plant pigments contributing to colors such as orange, yellow and bright red in many fruits and vegetables. Carotenoids are of great importance for plant health. As a class of phytonutrients, they can be found in the cells of a wide range of bacteria, algae and plants. Generally speaking, carotenoid-containing foods are red, yellow or orange, but not all the time. Carotenoids are widely found in fruits and vegetables such as tomatoes, carrots, papaya, watermelon, mangos, spinach and oranges. Though plants can generate carotenoids by themselves, animals can’t synthesize carotenoids and have to get from their diets.

DAP Analysis Service. The amino acid 2,6-diaminopimelic acid (DAPA) is a unique component in bacterial cell walls, thus it can be used as an indirect and specific indicator for the measurement of bacterial mass content in such biological materials as feeds or digestive tract contents in ruminants. Further, DAPA’s analogues 2,6-diamino-3-hydroxypimelic acid, together with some diaminopimelic acid, occurs in the cell-wall mucopeptide of certain Actinomycetales. For its discovery, Hoare and Work isolated the chromatographically slow-moving component recognized in hydrolysates of some Actinomycetales from Ampullariella regularis. The results showed that the analyte detected was 2,6-diamino-3-hydroxypimelic acid.

This compounds exists four pairs of optical enantiomorphs and these racemic pairs were synthesized by Stewart (1961) and identified as A, B, C and D (shown in Figure 1.) according to the relative configurations of the three asymmetric centers. Figure 1. Anthocyanins Profiling Service. Anthocyanins belong to the flavonoids class of the polyphenol. They are contributing to the colors such as red, blue, yellow and purple of many fruits and vegetables. In nature, anthocyanins predominantly exist as glycosides of polymethoxy and polyhydroxy derivatives of flavylium salts or 2-phenyl-benzopyryliurn. Though some anthocyanins can be found in lower plant like mosses and ferns, almost all anthocyanins are found in higher plants. Respiratory Quinones Analysis. Bacterial respiratory quinones in environmental samples is regarded as the sensitive indicators of aerobic metabolism and anaerobic metabolism in bacterial populations.

However, it’s impossible to measure the redox potential or dissolved oxygen directly for many samples. For the analysis of respiratory quinones, Creative Proteomics follow the procedure shown below. Platform Summary Sample Requirement 200 mg freeze dried cells Report. O-Glycans Analysis Service. Near UV Circular Dichroism Spectroscopy Analysis. Far UV Circular Dichroism Spectroscopy Analysis. Nuclear Magnetic Resonance (NMR) Pharmaceutical Analysis. Amino Acid Analysis Service. N-Terminal Sequencing by Edman Degradation Service. What Is Edman degradation? N-terminal sequencing by Edman degradation, is a traditional method for sequencing protein, and still has advantages for protein analysis that cannot readily be obtained by other analysis methods. Edman degradation is a cyclic procedure: N-terminal amino acid residues is labeled and cleaved off from the peptides or proteins at a time, and is identified by chromatography. Generally, the N-terminal amino group of the protein is reacted with phenyl isothiocyanate to form a phenylthiocarbamoyl derivative.

Under mildly acidic conditions, the derivative is released from the rest of the protein as a cyclic phenylthiohydantoin (PTH) amino acid. The released PTH amino acid is identified by high performance liquid chromatography (HPLC) or HPLC-MS. What Is the Characteristic of Edman Degradation? Edman sequencing is not a sensitive method, requiring several picomoles and purified protein, to obtain a define sequence information. What Is Edman Degradation Used for? Flow Cytometry Service. Flow cytometry service can quickly measure a series of important biophysical and biochemical characteristics of cells, such as its ability to identify cell surface proteins to characterize intracellular proteins, detect lymphocyte subtypes (TBNK), blood diseases typing, determination of tumor markers, etc., and provides a variety of different techniques to assess the specific characteristics of adaptability and innate immune function.

The exchange will be then detected and quantified by mass spectrometry since the deuterium is heavier than hydrogen. We Can Provide but Not Limited to: Technology Platform: Protein Identification Service. Sumoylation Analysis Service. Sumoylation is a classic protein post-translational modification biotechnology in protein drug development and production. Ubiquitination Analysis Service. Methylation Analysis Service. Methylation, the introduction of a methyl group into a molecule or compound, can have stereoelectronic effects on micromolecules and biomacromolecules, which cause various biological effects, including increased potency, protection against enzyme metabolism, and so forth. The insertion of one or more methyl groups into a bioactive molecule can change the solubility, bioavailability, lipophilicity, interaction with target proteins, metabolism, and pharmacokinetic/pharmacodynamics properties.