A nation under the gun

Parkland Survivors Called for an NRA Boycott, and Some Brands Are Finally Cutting Ties. Trump suggests arming teachers as a solution to increase school safety. "If you had a teacher who was adept with the firearm, they could end the attack very quickly," he said, stating that schools could arm up to 20% of their teachers to stop "maniacs" who may try and attack them. 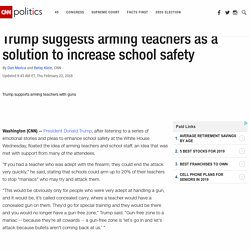 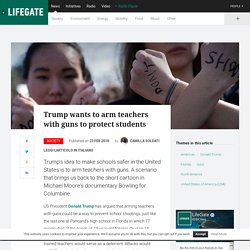 Time. Gun culture. Guns in the US "We are the candy store for guns in the world. 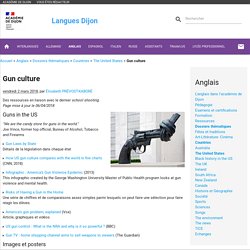 "Joe Vince, former top official, Bureau of Alcohol, Tobacco and Firearms. Jacksonville Landing mass shooting: America’s gun problem, explained. On Sunday, it happened again: another mass shooting in America. This time, a gunman killed at least three people in the Jacksonville Landing area in Florida. Already, the mass shooting has given rise to new calls for gun control laws. “We don’t want your thoughts & prayers,” the Coalition to Stop Gun Violence tweeted. “We want you voted out of office for your negligence and apathy toward American gun violence.” But if this plays out like the aftermath of past mass shootings, from Sandy Hook Elementary School in 2012 to Las Vegas in 2017, the chances of Congress taking major action on guns is very low. This has become an American routine: After every mass shooting, the debate over guns and gun violence starts up once again. So why is it that for all the outrage and mourning with every mass shooting, nothing seems to change?

Brady. Today there are more guns than people in the United States, and with gun ownership comes responsibility. 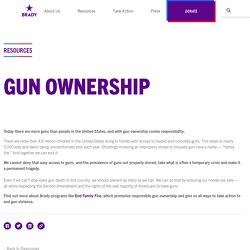 There are more than 4.6 million children in the United States living in homes with access to loaded and unlocked guns. This leads to nearly 3,000 kids and teens being unintentionally shot each year. Shootings involving an improperly stored or misused gun have a name — "family fire. " And together we can end it. We cannot deny that easy access to guns, and the prevalence of guns not properly stored, take what is often a temporary crisis and make it a permanent tragedy. America’s Gun Violence Epidemic [Infographic] - Blog. The online Master of Public Health program (MPH@GW) in conjunction with SPHHS created an infographic in hopes of raising awareness around America’s broken mental health system and issues pertaining to gun control and violence in the United States. 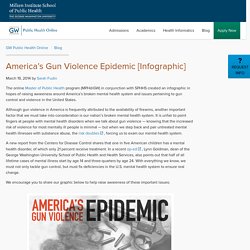 Although gun violence in America is frequently attributed to the availability of firearms, another important factor that we must take into consideration is our nation’s broken mental health system. It is unfair to point fingers at people with mental health disorders when we talk about gun violence — knowing that the increased risk of violence for most mentally ill people is minimal — but when we step back and pair untreated mental health illnesses with substance abuse, the risk doubles External link , forcing us to exam our mental health system.

A new report from the Centers for Disease Control shares that one in five American children has a mental health disorder, of which only 21 percent receive treatment. America's gun culture vs. the world in 5 charts. America's unique relationship to gun ownership -- enshrined as a right in its constitution -- is also in the middle of an emotional and divisive debate about the meaning of the Second Amendment of the United States Constitution. 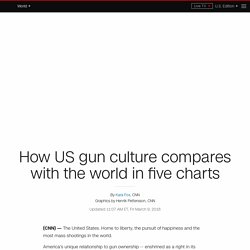 Twenty-seven words that give its citizens the right to own guns and also, in the views of many critics, helped usher in a culture that sees more of its own people killed by fellow citizens armed with guns than in any other high-income nation in the world. Gun-related deaths unfold in tragic circumstances across the country daily, with more than 1,800 people killed by guns this year alone, according to Gun Violence Archive, a not-for-profit group. Deaths by Firearms across the World - America among the Worst. How Donald Trump Replied To A 7-Year-Old's Anguished Letter. Ava Olsen was on the playground with other first-graders during a 2016 school shooting in Townville The manila envelope arrived on Mary Olsen's doorstep the day after Christmas, and in its top left corner were three words that stopped her: "THE WHITE HOUSE. 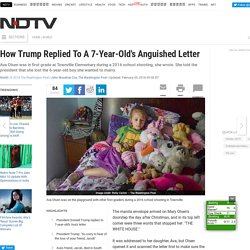 " It was addressed to her daughter, Ava, but Olsen opened it and scanned the letter first to make sure the message didn't include anything that might trigger her second-grader's debilitating anxiety. Olsen then called her little girl into their living room, where they sat together on the couch. She gave Ava the note, which, at the top, included the presidential seal. "Dear Ava," it read. How Trump replied to a 7-year-old's anguished letter about gun violence. The manila envelope arrived on Mary Olsen's doorstep the day after Christmas, and in its top left corner were three words that stopped her: "THE WHITE HOUSE. 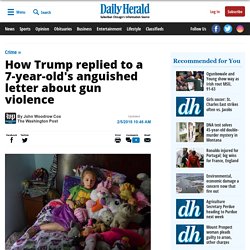 " It was addressed to her daughter, Ava, but Olsen opened it and scanned the letter first to make sure the message didn't include anything that might trigger her second-grader's debilitating anxiety. Olsen then called her little girl into their living room, where they sat together on the couch. She gave Ava the note, which, at the top, included the presidential seal. "Dear Ava," it read. "Thank you for your letter.

Fifteen months earlier, on a fall afternoon in tiny Townville, South Carolina, Ava had just walked outside her school for recess when, police say, a 14-year-old drove up to the playground in a Dodge Ram, jumped out of the pickup and pointed a gun. One bullet struck Ava's first-grade teacher in the shoulder, and another hit a classmate in the foot. Three days later, Jacob died. Read Powerful Gun Control Speech This 7-Year-Old Gave In Front Of U.S. Capitol On National Die-In Day. Accidental Gun Deaths Involving Children Are A Major Problem In The US. It was a gorgeous Sunday in March when Misty Uribe’s son watched one of his neighborhood friends accidentally shoot another in the face, she said. 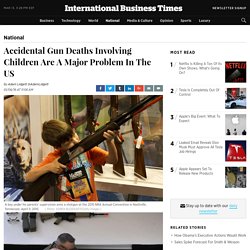 As Uribe, 30, sat in her Mooresville, North Carolina, home, never did she think the 8-year-old boy next door would find a loaded rifle in his family shed, take it outside during a game of cops and robbers, and fire it at another boy, she said. “He was shaking from head to toe,” Uribe said of her son after he returned from playing outside. “He kept saying, ‘So and so shot so and so with a gun.’ US gun debate: Guns in numbers. Image copyright Getty Images US President Barack Obama has announced a series of proposals to reduce gun violence, ranging from a proposed ban on military-style assault weapons to universal background checks. 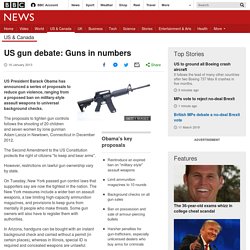 The proposals to tighten gun controls follows the shooting of 20 children and seven women by lone gunman Adam Lanza in Newtown, Connecticut in December 2012. The Second Amendment to the US Constitution protects the right of citizens "to keep and bear arms". However, restrictions on lawful gun ownership vary by state. On Tuesday, New York passed gun control laws that supporters say are now the tightest in the nation. Trump's solution to school shootings: arm teachers with guns.

Donald Trump has said he will consider a proposal to arm school teachers in an attempt to prevent mass shootings, a move certain to prove fiercely divisive. The US president, holding a listening session at the White House with survivors of last week’s Florida school shooting and others affected by gun violence, claimed that allowing airline pilots to carry and conceal guns had demonstrated the measure could be a success. “It only works when you have people very adept at using firearms, of which you have many,” Trump said during an emotionally searing session on Wednesday that, extraordinarily, was broadcast live on national television.

“It would be teachers and coaches.” Referring to Aaron Feis, a football coach who used his body as a shield to protect a student during the massacre at Marjory Stoneman Douglas high school in Parkland, the president continued: “If the coach had a firearm in his locker when he ran at this guy – that coach was very brave, saved a lot of lives, I suspect. How the #NeverAgain Movement Began. Killer In Our Classroom In Parkland, Florida: Never Again. 17 killed in Florida school shooting. 4 Pro-Gun Arguments We’re Sick of Hearing. Gun Violence Archive. Gun Violence Archive. President Trump addresses nation after Florida school shooting. We are the NRA. Good Guys. Gun Nation. BBC News How easy is it to buy a gun in Texas. Orlando shooting: How easy is it to buy a gun in Florida? Parkland students share thoughts on Texas school shooting. Lieux et formes du pouvoir - Handguns.

At some point, a fresh coat of paint turns the wall back into a blank canvas. This time, after the mural went up — one day following the Connecticut shooting — an anonymous art collector contacted Acosta about preserving the piece. “Crayons” is powerful… a kick in the gut… heart-wrenching… a single image capturing the horror of that day… an unforgettable expression about something we must never forget.

Reaction to the piece has been mixed. The mural is a reaction to Sandy Hook, not a memorial to the victims. Parkland school shooting survivors on cover of Time magazine. Five students who survived the Parkland massacre are featured on Time magazine's new cover just days before March for Our Lives - a protest organized by the activists to challenge current gun legislation. In the center of the cover stands Emma Gonzalez - a high school senior who gained notoriety after her impassioned speech about gun violence just days after the shooting - with her arms crossed across the chest.

The headline reads 'ENOUGH' in capital letters with four other student activists - Jaclyn Corin, Alex Wind, Cameron Kasky and David Hogg - featured on either side of Gonzalez. The five students have vocalized the need for gun reform from politicians after Nikolas Cruz walked into Marjory Stoneman High School in Parkland, Florida, and killed 17 people with an AR-15. The student activists' next movement will happen Saturday during the March for Our Lives protest in Washington DC and other cities worldwide.