Plastic: The Ocean's Deadliest Predator - We Hate To Waste. By day, I build and run waste processing infrastructure in Perth, Australia. 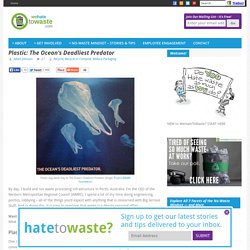 I’m the CEO of the Western Metropolitan Regional Council (WMRC). I spend a lot of my time doing engineering, politics, lobbying – all of the things you’d expect with anything that is concerned with Big Serious Stuff. And in doing this, it is easy to overlook that waste is a deeply personal affair. Waste is, at its core, a set of personal habits that aggregate to create a social problem. Sperm whale: death by 100 plastic bags. Photo credit: Pelagos Cetacean Research Institute / A. 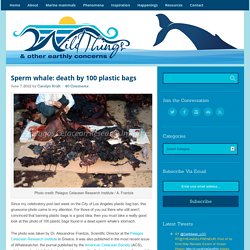 Frantzis Since my celebratory post last week on the City of Los Angeles plastic bag ban, this gruesome photo came to my attention. Ocean Health Index. Plastic debris is unsightly; it damages fisheries and tourism, kills and injures a wide range of marine life, has the capacity to transport potentially harmful chemicals and invasive species and can represent a threat to human health (Thompson et al. 2009). 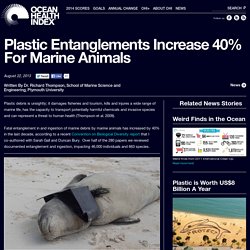 Fatal entanglement in and ingestion of marine debris by marine animals has increased by 40% in the last decade, according to a recent Convention on Biological Diversity report that I co-authored with Sarah Gall and Duncan Bury. Over half of the 280 papers we reviewed documented entanglement and ingestion, impacting 46,000 individuals and 663 species. Weaned Monk Seal pup entangled in a line with plastic, found in Midway Atoll, Spring 2013. Courtesy of the United States Fish and Wildlife Service (USFWS). The unaltered stomach contents of a dead albatross chick; includes plastic marine debris fed by its parents. Chris Jordan. Plastic Pollution - Everything Connects. Plastic Bags and the Ocean - Plastic Pollution and Plastic Bag Facts. Plastic bags In 2007 San Francisco, California passed controversial legislation to ban the distribution of plastic bags in major grocery stores. 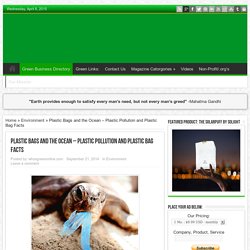 The city estimated that more than 170 million plastic bags ended up littering public spaces – including storm drains – every year. Plastics in our Oceans. Now take that image, double it, and plunk into the water That's what is floating around the eastern corner of a 10-million-square-mile oval known as the North Pacific subtropical gyre. 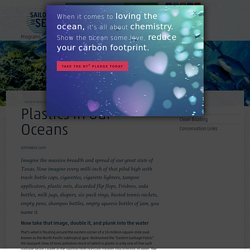 Nicknamed the "Eastern Garbage Patch," this buoyant stew of toxic pollution-most of which is plastic-is only one of five such garbage heaps caught in the swirling high-pressure currents characteristic of gyres. The others reside in the South Pacific, the North and South Atlantic, and the Indian Ocean. And each year, perhaps unwittingly, each one of us adds to plastic to the heap. The effects of these garbage heaps, as well as of the smaller, free-floating pollution, has a devastating effect on marine life, wild life, and human life.

If this isn't enough to elicit action, how about the effects this pollution is having on people? Scientists have linked obesity, infertility, and depression with the entry of these pollutants into the food chain. Effects on Wildlife - Plastic Bag Reduction Campaign. Turtle rescued by a staff member from Melbourne Zoo Bryde's whale dying with 6 square metres of plastic in its stomach (photo courtesy of The Cairns Post) 'Pete' the Pelican died at Kiama after swallowing plastic bags Lucky the Platypus with the cut around his neck from a plastic bag. 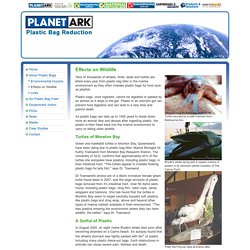 Paper or Plastic. How Humans Affect Animals. There are millions of insects, fish, amphibians, reptiles, birds and mammals, but only one kind of human. 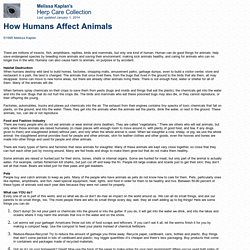 Human can do good things for animals: help save endangered species by breeding more animals and saving their environment; making sick animals healthy, and caring for animals who can no longer live in the wild. Humans can also cause harm to animals, on purpose or by accident. Habitat Destruction When humans destroy wild land to build homes, factories, shopping malls, amusement parks, garbage dumps, even to build a visitor center, store and restaurant in a park, the land is changed. The animals that once lived there, from the bugs that lived in the ground to the birds that ate them, all may disappear. Some can move to new home areas, but there are already other animals living there. When farmers spray chemicals on their crops to save them from pests (bugs and molds and things that eat the plants), the chemicals get into the water and into the soil. 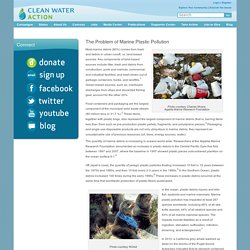 Key components of land-based sources include litter, trash and debris from construction, ports and marinas, commercial and industrial facilities, and trash blown out of garbage containers, trucks, and landfills.1 Ocean-based sources, such as, overboard discharges from ships and discarded fishing gear, account for the other 20%. The quantity of marine debris is increasing in oceans world-wide. Researchers at the Algalita Marine Research Foundation documented an increase in plastic debris in the Central Pacific Gyre five-fold between 1997 and 2007, where the baseline in 1997 showed plastic pieces outnumbered plankton on the ocean surface 6:1.4 Photo courtesy NOAA. Interesting Facts About Plastic Bags - The World Counts. What’s the problem with plastic bags? 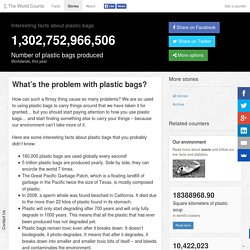 How can such a flimsy thing cause so many problems? We are so used to using plastic bags to carry things around that we have taken it for granted… but you should start paying attention to how you use plastic bags… and start finding something else to carry your things – because our environment can’t take more of it. Here are some interesting facts about plastic bags that you probably didn’t know: The trash vortex. You could save a turtle’s life by using less plastic and making sure your garbage is properly managed. 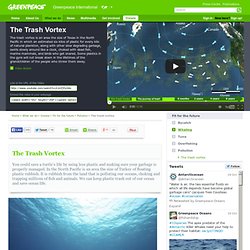 In the North Pacific is an area the size of Turkey of floating plastic rubbish. It is rubbish from the land that is polluting our oceans, choking and trapping millions of fish and animals. We can keep plastic trash out of our ocean and save ocean life. Take a walk along almost any beach anywhere in the world and washed ashore will almost certainly be either plastic bags and bottles, or containers. Perhaps plastic drums or expanded polystyrene packing.

It's in the bag: California ban on single-use plastic bags is a win for oceans. Today we’re toasting healthier oceans and Governor Brown’s leadership in signing a landmark law to help keep the estimated 13 billion single-use plastic bags used in California every year from polluting our waters and lands. Building on the action taken by more than 100 local communities in the state, State Senator Alex Padilla authored SB 270 to ban single-use plastic bags from distribution by major retailers. He did an outstanding job of building a broad coalition of support. The Senator himself said it well: “A throw-away society is not sustainable. With SB 270 we have an opportunity to greatly reduce the flow of billions of single-use plastic bags that are discarded throughout our state. This is good for California and reflects our values as a state that cares about the environment, sea life and wildlife.”

For ocean lovers like me, the enactment of this statewide ban is a thrilling win, because we know how devastating these bags can be to marine life. Plastic Pollution in Oceans. Environmental Issues > Oceans Main Page > All Oceans Documents The Basics. Plastic Bags in the Ocean. The hazard of plastic bags in the ocean is greater than ever before. While plastic bags remain a benefit to retailers and consumers, their impact on the environment needs to be reconsidered. The Environmental Impact of Plastic In recent years, plastic bags have been a hot environmental topic. While there are several advantages to plastic bags, in general the disadvantages to the environment are becoming more apparent. Non-Biodegradable While biodegradable plastics are becoming available, most of the plastic bags used every day still take years to begin to break down. Additionally, even those plastics which are biodegradable will still release toxins as they break down, while consuming vast amounts of oxygen in the process.

Say NO to Plastic Bags! // Animals Australia. Few shoppers stop to consider that disposable plastic bags have a devastating impact on marine animals such as whales, seals, sea birds and turtles. More than 100,000 animals die every year after ingesting or becoming entangled in them. This is why Animals Australia has partnered with LUSH to draw attention to the 5.6 billion disposable shopping bags used by Australian consumers each year. Keep Plastic Out of the Pacific.

Trash is killing ocean wildlife Californians throw away 123,000 tons of plastic bags each year, and too many of them end up as litter in our ocean. Today, there are 100 million tons of trash in the North Pacific Gyre; in some parts of the Pacific, plastic outweighs plankton 6 to 1. All of this trash in the Pacific is creating an ecological disaster: Turtles and seabirds frequently ingest floating plastic, mistaking it for food.

They also get entangled in bags and often drown or die of suffocation.Adult seabirds inadvertently feed small bits of plastic to their chicks — often causing them to starve to death after their stomachs become filled with plastic.Toxic pollutants leach from the plastic into the water. What’s really scary is that scientists tell us this plastic may never biodegrade. We can stop the waste Nothing we use for a few minutes should pollute our oceans for hundreds of years. Ocean Plastics Pollution. Ocean Plastic — SEE Turtles. Silent Killers: The Danger of Plastic Bags to Marine Life. By Laura Beans.

Plastics in Our Oceans. All photos (except where noted) courtesy of Paul Joyce, Sea Education Association by Kimberly Amaral Strolling through the average supermarket, shoppers find literally hundreds (if not thousands) of items to make their lives easier. 22 Facts About Plastic Pollution (And 10 Things We Can Do About It)