The Periodic Table. Solving the puzzle of the periodic table - Eric Rosado. How to build a simple electric motor. Can 100% renewable energy power the world? - Federico Rosei. About TED-Ed Animations TED-Ed Animations feature the words and ideas of educators brought to life by professional animators. 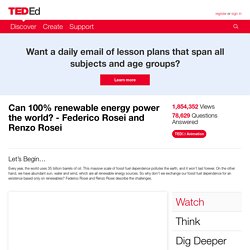 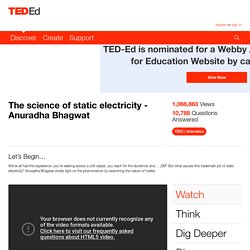 The effects of static electricity are seen when an insulating material such as plastic, rubber, or wool is involved. Which materials lose electrons readily depends on the inner structure of materials themselves and how tightly the electrons are bound. Physicists have ranked materials by the order in which they lose or gain electrons. This ranking is called the triboelectric series. And what is it with static electricity and human skin? At home and in factories, there are places where you will see thick metal wires connected physically to Earth – these are known as earthing wires or grounding wires.

Why do we experience effects of static electricity mostly in dry, winter climates? For some experiments about static electricity that are simple to do go here! WHAT WILL HAPPEN IF? 2. 3. How batteries work - Adam Jacobson. Several advancements soon followed the Voltaic pile. 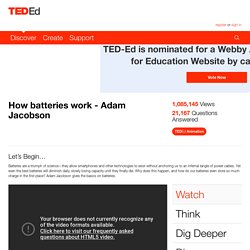 British chemist John Frederic Daniell replaced the salt water with a solution of copper sulfate, which would be reduced into pure copper on the surface of the copper. The copper was no longer a flat plate, but a copper pot that held the solution, a zinc rod, and a porous earthenware pot separating them. The Daniell cell could generate up to 1.1 Volts without the hydrogen gas problem, a vast improvement on Volta’s short-living pile that measured only 0.8 volts. French Scientist Georges Leclanché improved on this in 1866 – he switched out the copper and copper sulfate for a carbon rod sitting in a solution containing manganese IV oxide, which would reduce to manganese (III) oxide. This upped the voltage to 1.4 Volts and found a lot of usage powering telegraphs and early telephones.

The 1892 patent awarded to German Karl Gassner recognized a “dry cell” using a manganese IV oxide paste that removed as much water as possible. Endothermic and Exothermic Reactions (examples, answers, activities, experiment, videos) What.If - What If You Made an Actual Model of the Periodic Table? The 2,400-year search for the atom - Theresa Doud. Ernest Rutherford Although Ernest Rutherford is well known for his discovery of the nucleus, he did a lot of other research and experiments into topics other than the atom. 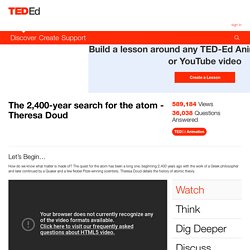 He started his career studying electricity and magnetism and it wasn’t until he left his home of New Zealand and moved to Cambridge, England that he started working with the atom. Working under J.J. Thomson at Cambridge University, Rutherford investigated electrical conduction in gases using X-rays. When radioactive atoms were discovered in the late 1890s, he switched his experiment to use radioactivity instead of X-rays to initiate electrical conduction in his gases. In 1911 after returning to England, Rutherford conducted his most famous experiment with alpha particles and gold foil which lead to his discovery of the nucleus. 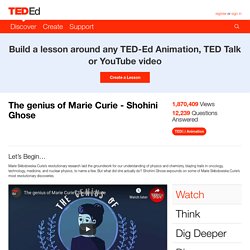 Marie Curie transformed science and society with her discoveries. Her scientific partnership with Pierre Curie and the story of their heroic efforts that led to the discovery of polonium and radium are legendary. Despite her scientific contributions and winning her first Nobel prize in 1903, as a woman and an immigrant, she was not elected to the French Academy of Sciences in 1911. She also faced vicious and xenophobic attacks from the press for an alleged affair with the scientist Paul Langevin.

That year she won her second Nobel prize, but she never again applied for membership in the Academy. When war broke out in 1914, Dr. The Curie family was truly distinguished. Find out more about the elements Radium and Polonium in these TED Ed lessons about these elements. How do nuclear power plants work? - M. V. Ramana and Sajan. This reading list provides a whistle-stop tour of basic issues associated with nuclear energy. 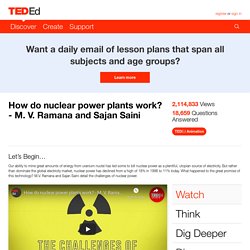 Start with "The World Nuclear Industry Status Report 2016" by Mycle Schneider and Antony Froggatt. This review of worldwide developments in nuclear energy by Schneider and Froggatt, two energy analysts, aided by other specialists is published annually. It contains overviews of nuclear energy programs by country and by region, as well as summaries of global and regional trends in the energy industry.