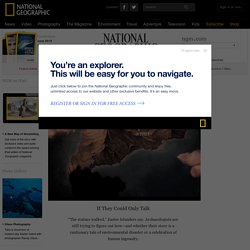 Archaeologists are still trying to figure out how—and whether their story is a cautionary tale of environmental disaster or a celebration of human ingenuity. By Hannah Bloch Video Animation by Hans Weise, Spencer Millsap, Fernando G. Baptista, and Fanna Gebreyesus On a winter night last June, José Antonio Tuki, a 30-year-old artist on Easter Island, did one of the things he loves best: He left his one-room home on the southwest coast and hiked north across the island to Anakena beach. Sleepless roosters crowed; stray dogs barked. Easter Island covers just 63 square miles. But lately the moai have been drawn into a larger debate, one that opposes two distinct visions of Easter Island’s past—and of humanity in general.

When the Polynesian settlers arrived at Rapa Nui, they had been at sea for weeks in open canoes. Chile annexed Easter Island in 1888, but until 1953 it allowed a Scottish company to manage the island as a giant sheep ranch. Why Are Bees So Important To Our Ecosystem? Posted on Jun 11, 2014 | Comments 0 Bees are those insects which feed on flowers and have hairy bodies with four arms. 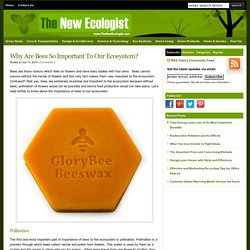 Bees cannot survive without the nectar of flowers and this very fact makes them very important to the ecosystem. Confused? Well yes, bees are extremely essential and important to the ecosystem because without bees, pollination of flowers would not be possible and hence food production would not take place. Let’s read further to know about the importance of bees to our ecosystem. Links in the Chain: Ecosystem Ecology - Crash Course Ecology #7. 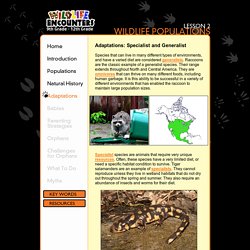 Raccoons are the classic example of a generalist species. Their range extends throughout North and Central America. They are omnivores that can thrive on many different foods, including human garbage. It is this ability to be successful in a variety of different environments that has enabled the raccoon to maintain large population sizes. Specialist species are animals that require very unique resources. Specialist species are more likely to suffer from habitat loss and disruption than generalist species. Eco108 GFX Final. Nitrogen & Phosphorus Cycles: Always Recycle! Part 2 - Crash Course Ecology #9.

Cycles.pdf. The Food Chain in the Wild - Animal Life In Action - Full Documentary. Tangled in the Food Web (Animal Atlas) Climate Change Real, Human-Caused. 2013 was among the hottest years ever, spurred by the highest accumulation of greenhouse gases in the atmosphere on record. 2013 was another year of extreme weather. 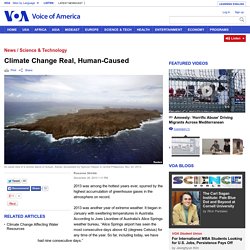 It began in January with sweltering temperatures in Australia. According to Joes Lisonbee of Australia's Alice Springs weather bureau, “Alice Springs airport has seen the most consecutive days above 42 (degrees Celsius) for any time of the year. So far, including today, we have had nine consecutive days.” The year was marked around the globe by deadly wildfires and floods, unrelenting drought and one of the strongest typhoons ever in the Philippines that left nearly 6,000 dead and more than four million homeless. 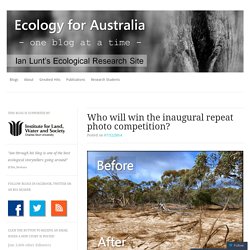 If you have, it’s now time to enter. At the start of the year, I announced a photo competition. The goal was to encourage everyone to get out in the bush and to record changes in their favourite ecosystem. It’s now time to submit your shots and then vote for your favourite repeat photos of 2014. Continue reading Take a close look at the coppicing trees in the old photo above. Perhaps it looks like any other stand of burnt mallee? The scientists before me out-sourced everything, from typing a letter to making a pot of tea. For months now, I’ve collated hundreds of blogs on the Facebook page, Australia’s Best Ecology Blogs, to showcase science to a larger audience.

Collating blogs on Facebook made me realize that bad blogging is like wearing old pyjamas in public. It’s a simple philosophy. What would you miss the most, if climate change made it disappear from your favourite natural area? Continue reading. Assignment Discovery Elements of Biology Part 5 of 5 Ecosystems, Organisms and Their Environme.