If my Pussy smells like Tuna, why doesn't my Cat eat me out? It's a legitimate question, don't you think? 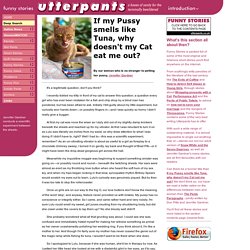 At first my cat was none the wiser as I slyly slid out of my slightly damp knickers beneath the sheets and reached up for my vibrator. At first I was reluctant to turn it on as Lulu was literally six inches from my waist, so why draw attention to what I was doing if I didn't have to, right? Well I had to—this was a scientific experiment, remember? Meanwhile my inquisitive moggie was beginning to suspect something sinister was going on—or possibly round and round— beneath the twitching sheets. She probably wondered what all that grunting was about. How catnip gets cats high.

Things start getting muddled once cats get involved. – blkraptor

Cat physics – and we are not making this up. Cats may skulk, and cats may fall – but no matter what they do, cats must obey the laws of physics. 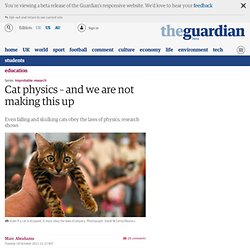 Scientists have tried repeatedly to figure out how they manage to do it. At the extreme, physicists analysed what happens to a dropped cat. That's a cat in free-fall, a cat hurtling earthwards with nothing but kitty cunning to keep it from crashing. In 1969, TR Kane and MP Scher of Stanford University, in California, published a monograph called A Dynamical Explanation of the Falling Cat Phenomenon. It remains one of the few studies about cats ever published in the International Journal of Solids and Structures. "It is well known that falling cats usually land on their feet and, moreover, that they can manage to do so even if released from complete rest while upside-down … numerous attempts have been made to discover a relatively simple mechanical system whose motion, when proceeding in accordance with the laws of dynamics, possesses the salient features of the motion of the falling cat.

Study Of Cat Movements And Positions Pictures, Photos, Images & Graphics. Cat Webcam Stream. String Theory Cat. Why Paint Cats Home Page. Why Cats Paint. Falling cat problem. A falling cat modeled as two independently rotating parts turns around while maintaining zero net angular momentum The falling cat problem consists of explaining the underlying physics behind the common observation of the cat righting reflex: how a free-falling cat can turn itself right-side-up as it falls, no matter which way up it was initially, without violating the law of conservation of angular momentum. 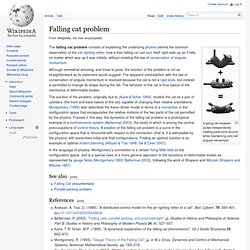 Although somewhat amusing, and trivial to pose, the solution of the problem is not as straightforward as its statement would suggest. The apparent contradiction with the law of conservation of angular momentum is resolved because the cat is not a rigid body, but instead is permitted to change its shape during the fall. The behavior of the cat is thus typical of the mechanics of deformable bodies. See also[edit] References[edit] Arabyan, A; Tsai, D. (1998), "A distributed control model for the air-righting reflex of a cat", Biol. Further reading[edit] Dirk Gently - Schrödinger's Cat. Schrödinger's cat. Schrödinger's cat: a cat, a flask of poison, and a radioactive source are placed in a sealed box. 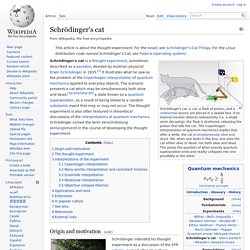 If an internal monitor detects radioactivity (i.e. a single atom decaying), the flask is shattered, releasing the poison that kills the cat. The Copenhagen interpretation of quantum mechanics implies that after a while, the cat is simultaneously alive and dead. Yet, when one looks in the box, one sees the cat either alive or dead, not both alive and dead. This poses the question of when exactly quantum superposition ends and reality collapses into one possibility or the other. Schrödinger's cat is a thought experiment, sometimes described as a paradox, devised by Austrian physicist Erwin Schrödinger in 1935.[1] It illustrates what he saw as the problem of the Copenhagen interpretation of quantum mechanics applied to everyday objects. Origin and motivation[edit] Real-size cat figure in the garden of Huttenstrasse 9, Zurich, where Erwin Schrödinger lived 1921 – 1926. Schrödinger wrote:[1][10]