Tech That Spurs Critical Thinking. Let Students Learn From Failure. Too often, students–and teachers–believe learning comes from success when in truth, it’s as likely to be the product of failure. 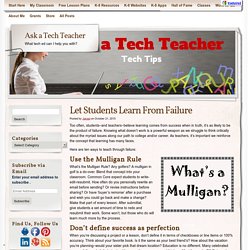 The Science of Metacognition. Five years ago I heightened my self-knowledge—abruptly. 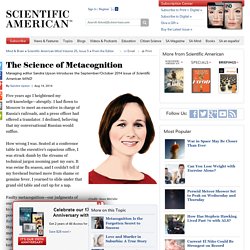 I had flown to Moscow to meet an executive in charge of Russia's railroads, and a press officer had offered a translator. I declined, believing that my conversational Russian would suffice. How wrong I was. Seated at a conference table in the executive's capacious office, I was struck dumb by the streams of technical jargon zooming past my ears. It was swine flu season, and I couldn't tell if my forehead burned more from shame or genuine fever. Faulty metacognition—our judgments of our knowledge and memories—had led me to overrate my language skills and perform poorly at a key moment. A shared vocabulary is one aspect of successful communication, but raconteurs also swap subtle signals to intimate their thoughts. 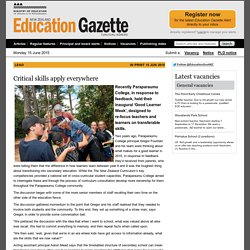 Two years ago, Paraparaumu College principal Gregor Fountain and his team were thinking about what makes for a good learner in 2015, in response to feedback they’d received from parents, who were telling them that the difference in how learners learn between year 8 and 9 was the toughest thing about transitioning into secondary education. While the The New Zealand Curriculum’s key competencies provided a national set of cross-curricular student capacities, Paraparaumu College aimed to interrogate these and through the process of curriculum consultation develop more ownership for them throughout the Paraparaumu College community.

The discussion began with some of the more senior members of staff recalling their own time on the other side of the education fence. Good Learner Week. How Do We Learn? How Should We Learn? If I ask you or your students, “How do you learn,” how many of you could clearly articulate this process? 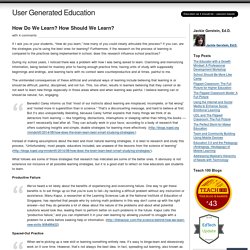 If you can, are the strategies you’re using the best ones for learning? Furthermore, if the research on the process of learning is compared to the practices being implemented in school, does this research influence school practices? How Students Learn. And there are some problems with a daily regimen of benchmark testing. 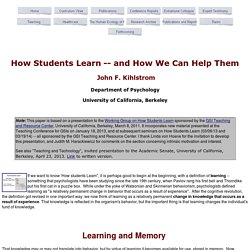 So a daily regime of benchmark testing probably isn't for everyone; but it's something to think about. Benchmark testing may not be for everyone, nor multiple midterms, but final exams should be. There is a tendency to shy away from finals, sometimes in favor of a noncumulative exam covering only material since the midterm, but cumulative final exams definitely have educational merit. In the first place, a cumulative final exam forces students to review all the material covered in the course, and that review in and of itself enhances learning.

Plus, it's an opportunity for the student to put the whole course together, to connect material from the first half with material from the second. Live and Learn. 16 Ways Your Brain Is Sabotaging Your Effort To Learn. Why Curiosity Enhances Learning. "The important thing is not to stop questioning. 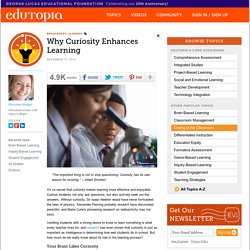 Experiences in Self-Determined Learning: Moving from Education 1.0 Through Education 2.0 Towards Education 3.0. Mrs. 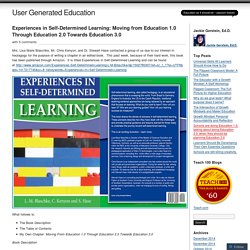 Lisa Marie Blaschke, Mr. Chris Kenyon, and Dr. Stewart Hase contacted a group of us due to our interest in heutagogy for the purpose of writing a chapter in an edited book. This past week, because of their hard work, this book has been published through Amazon. It is titled Experiences in Self-Determined Learning and can be found at What follows is: The Book DescriptionThe Table of ContentsMy Own Chapter: Moving From Education 1.0 Through Education 2.0 Towards Education 3.0 Book Description Self-determined learning or heutagogy is fast gaining interest from educators around the world interested in an evidence-based approach to learning.

Universal Skills All Learners Should Know How to Do. 10 Ways to Boost Brain Power for Young Students. Research into neuroscience and brain power is among the most fascinating due to its impact on education. 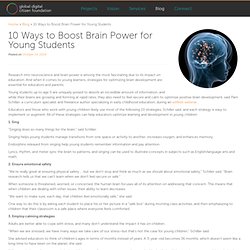 And when it comes to young learners, strategies for optimizing brain development are essential for educators and parents. Young students up to age 5 are uniquely poised to absorb an incredible amount of information, and while their brains are growing and forming at rapid rates, they also need to feel secure and calm to optimize positive brain development, said Pam Schiller, a curriculum specialist and freelance author specializing in early childhood education, during an edWeb webinar.

TEDxOaklandUniversity. Reforming American education: Learning how to learn. Photograph is of Rochester borstal Kent, England. c1906 Original photograph owned by the Galleries of Justice Museum WASHINGTON, August 29, 2014 — With the school year underway, we can expect one thing: continued criticism and debate over America’s failing education system. 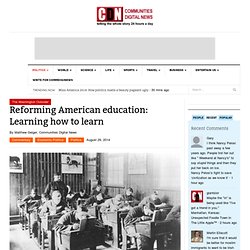 For the 2014 school year and beyond, teachers, students, parents, and policymakers need to focus on solutions developed around the American education system’s strengths. Foreign students consistently outperform American students on tests of math, science and geography. The U.S. spends more per student than almost any other developed country, for among the worst results. The only aspect of the U.S. education system that triumphs over other education systems is that America not only educates everyone, but also encourages originality and creativity in students.