Animista. Introduction to CSS Animations (With a Sprinkle of Vue.js) Introduction Since launching and running the Daily CSS Images challenge, I’ve noticed that a lot of people have had a lot of fun by adding CSS animations to their images, which has been super cool to witness! 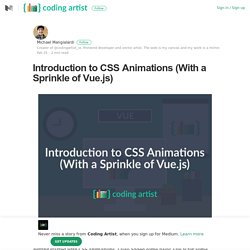 However, I am sure there are many other participants who see these animations and are wondering, “That looks cool…how do I do that?” In fact, it wasn’t too long ago that I was in the same situation. I would see pens on Codepen with this weird thing called “@keyframes”, and I thought to myself, “Sure would be nice to know what this all means...”

After some study and practice, I quickly realized that CSS animations were actually very easy to get started with. 3 Key Uses for Animation in Mobile UI Design – UX Planet. With the quick development of technology, animation is less of a visual luxury and more of a functional requirement that users expect. 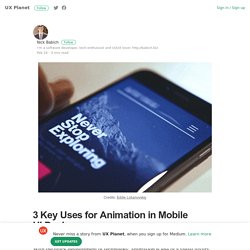 Animation solves a lot of functional problems within interfaces and makes interfaces feel alive and truly responsive to the user. Let’s explore the key animation tactics that improve the functionality and emotional power of your mobile interface. 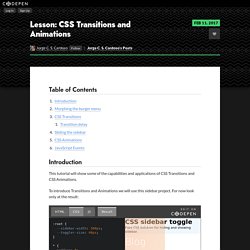 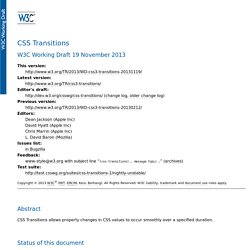 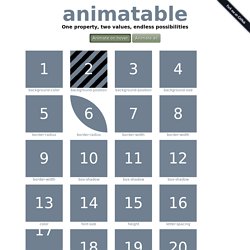 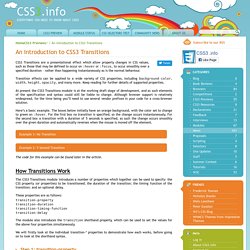 Transition effects can be applied to a wide variety of CSS properties, including background-color, width, height, opacity, and many more. Keep reading for further details of supported properties. Learn Advanced CSS Layout Techniques - Course by @damon_bauer. Search Results. Using CSS animations. This is an experimental technologyBecause this technology's specification has not stabilized, check the compatibility table for usage in various browsers. 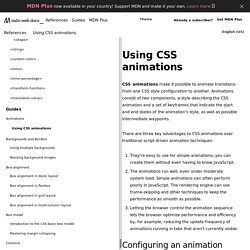 Also note that the syntax and behavior of an experimental technology is subject to change in future versions of browsers as the specification changes. CSS animations make it possible to animate transitions from one CSS style configuration to another. Animations consist of two components, a style describing the CSS animation and a set of keyframes that indicate the start and end states of the animation's style, as well as possible intermediate waypoints. There are three key advantages to CSS animations over traditional script-driven animation techniques: They're easy to use for simple animations; you can create them without even having to know JavaScript. Keyframe Animation Syntax. Basic Declaration & Usage For the sake of brevity the rest of the code on this page will not use any prefixes, but real world usage should use all the vendor prefixes from above Multiple steps. 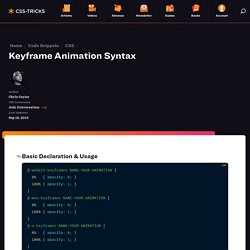 CSS Transitions. Conformance requirements are expressed with a combination of descriptive assertions and RFC 2119 terminology. 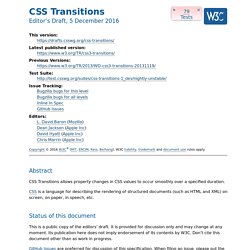 The key words “MUST”, “MUST NOT”, “REQUIRED”, “SHALL”, “SHALL NOT”, “SHOULD”, “SHOULD NOT”, “RECOMMENDED”, “MAY”, and “OPTIONAL” in the normative parts of this document are to be interpreted as described in RFC 2119. However, for readability, these words do not appear in all uppercase letters in this specification. Before. ::after is a pseudo element which allows you to insert content onto a page from CSS (without it needing to be in the HTML). 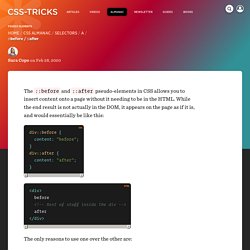 Animated GIFs adorned just about every page, spinning globes, little men with jack hammers, self-folding winged envelopes. And if you're very unlucky, you'll remember the explosion of blinking content on the web around 1995, as the blink element in the then dominant Netscape browser took hold of the imagination of designers everywhere (for killing off the non-standard blink element alone, the web standards movement deserves at the very least a Noble Peace Prize). "The Illusion Of Life" by Cento Lodigiani. High Performance Animations - HTML5 Rocks. We’re going to cut straight to the chase. Modern browsers can animate four things really cheaply: position, scale, rotation and opacity. If you animate anything else, it’s at your own risk, and the chances are you’re not going to hit a silky smooth 60fps. Take a look at this side-by-side slow motion video of the same animation:

CSS animatable properties ❧ Oli.jp (@boblet) This is a reordered list of animatable CSS properties and their animatable values, based on the CSS Transitions Module (level 3) Editor’s Draft, plus the “Animatable:” status for each property of each CSS3 spec Editor’s Draft. This is the theory. For browser support info go to CSS Animatable Properties: Browser support, a collaboration with Rodney Rehm. CSS Transitions. CSS Transition (CSS Animations Series Part 1) How to Create an Animated Logo with SVG and CSS. The selective use of well-designed animations has been shown to improve user experience, and although the web is slowly transitioning towards HTML5 for web animations, its use also gives rise to some complications. Scalable vector graphics (or SVGs) provide an accessible alternative, with a great API along with many other benefits, and they can be animated with a little creative use of Cascading Style Sheets. Over the course of this article, we’re going to delve into all the other benefits of using SVGs and teach you exactly how to use them in combination with CSS to create animated logos.

The guide to CSS animations for the web. Have you been asked by your client, boss or designer to create some nice animations on the next web project? They say: “I have seen this cool effect on the other site, can you do something similar?” Or “I have this idea for an animation, can you do it?” And you go: “Sure I can.” or “Hm, I don’t know…” Tip of the day: Never say “No, I can’t do it.”