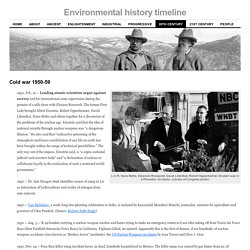 Einstein was in a Princeton, NJ studio. (Library of Congress photo). 1950, Feb. 12 — Leading atomic scientists argue against secrecy and for international arms supervision during the premier of a talk show with Eleanor Roosevelt. The former First Lady brought Albert Einstein, Robert Oppenheimer, David Lilienthal, Hans Bethe and others together for a discussion of the problems of the nuclear age.

Einstein said that the idea of national security through nuclear weapons was “a dangerous illusion.” 1950 — Dr. 1950 — Van Mahotsav, a week-long tree-planting celebration in India, is initiated by Kanaiyalal Manekial Munshi, journalist, minister for agriculture and governor of Uttar Pradesh. 1950 — Aug. 5 — B-29 bomber carrying a nuclear weapon crashes and burns trying to make an emergency return to b ase after taking off from Travis Air Force Base (then Fairfield-SuisunAir Force Base) in California.

Silent Spring. Silent Spring is an environmental science book written by Rachel Carson and published by Houghton Mifflin on September 27, 1962.[1] The book documented the detrimental effects on the environment—particularly on birds—of the indiscriminate use of pesticides. Carson accused the chemical industry of spreading disinformation and public officials of accepting industry claims unquestioningly. In the late 1950s, Carson turned her attention to conservation, especially environmental problems that she believed were caused by synthetic pesticides.

The result was Silent Spring (1962), which brought environmental concerns to the American public. Silent Spring was met with fierce opposition by chemical companies, but it spurred a reversal in national pesticide policy, led to a nationwide ban on DDT for agricultural uses,[2] and inspired an environmental movement that led to the creation of the U.S. Environmental Protection Agency.[3][4] Research and writing[edit] Content[edit] Ozone Depletion Information, Ozone Depletion Facts, Ozone Layer, Ozone Hole - National Geographic. The ozone layer is a belt of naturally occurring ozone gas that sits 9.3 to 18.6 miles (15 to 30 kilometers) above Earth and serves as a shield from the harmful ultraviolet B radiation emitted by the sun. 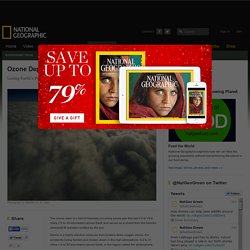 Ozone is a highly reactive molecule that contains three oxygen atoms. It is constantly being formed and broken down in the high atmosphere, 6.2 to 31 miles (10 to 50 kilometers) above Earth, in the region called the stratosphere. Today, there is widespread concern that the ozone layer is deteriorating due to the release of pollution containing the chemicals chlorine and bromine. Such deterioration allows large amounts of ultraviolet B rays to reach Earth, which can cause skin cancer and cataracts in humans and harm animals as well.

Extra ultraviolet B radiation reaching Earth also inhibits the reproductive cycle of phytoplankton, single-celled organisms such as algae that make up the bottom rung of the food chain. What is the Ozone Layer and How Does it Affect Us? Author: Susan Hunt MA - Updated: 26 October 2014| Comment The easiest way to come to grips with the Ozone Layer is to imagine the earth's atmosphere as a layered cake.Our atmosphere is split into a number of layers, beginning with the "troposphere" which is where we all live. 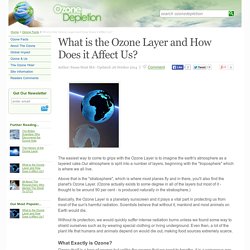 Above that is the "stratosphere", which is where most planes fly and in there, you'll also find the planet's Ozone Layer. (Ozone actually exists to some degree in all of the layers but most of it - thought to be around 90 per cent - is produced naturally in the stratosphere.) Basically, the Ozone Layer is a planetary sunscreen and it plays a vital part in protecting us from most of the sun's harmful radiation. Without its protection, we would quickly suffer intense radiation burns unless we found some way to shield ourselves such as by wearing special clothing or living underground. What Exactly is Ozone?

Ozone itself is a type of oxygen but unlike the oxygen that we need to breathe, it is a poisonous gas. Title: Stockholm: Birth of the green generation. 4 June 2012Last updated at 17:00 ET Stockholm was the first UN summit to feature, even welcome, groups from civil society Stockholm, 1972. 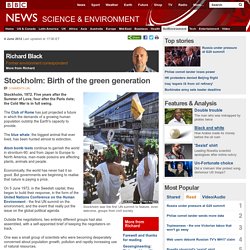 Five years after the Summer of Love, four after the Paris riots; the Cold War is in full swing. The Club of Rome has just projected a future in which the demands of a growing human population outstrip the Earth's capacity to provide. The blue whale, the biggest animal that ever lived, has been hunted almost to extinction. Atom bomb tests continue to garnish the world in strontium-90; and from Japan to Europe to North America, man-made poisons are affecting plants, animals and people.

Economically, the world has never had it so good. United Nations Global Issues. The environmental movement might be said to have begun centuries ago as a response to industrialization. 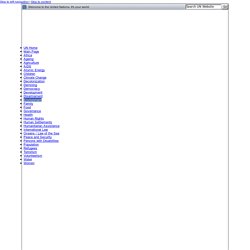