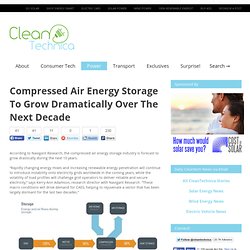 How your iPhone uses more energy than a refrigerator. Maybe you drive a hybrid car and recycle your plastic containers. 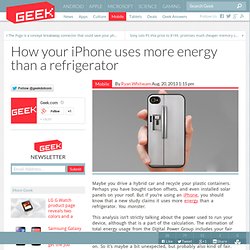 Perhaps you have bought carbon offsets, and even installed solar panels on your roof. But if you’re using an iPhone, you should know that a new study claims it uses more energy than a refrigerator. Peru Unveils Plan to Use Solar Panels to Provide Electricity to 2 Million People. LIMA – The National Photovoltaic Household Electrification Program will benefit more than 2 million people in Peru, Energy and Mining Minister Jorge Merino said. 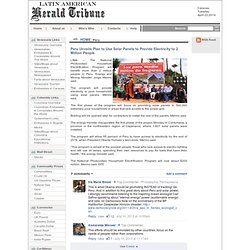 The program will provide electricity to poor households using solar panels, Merino said. The first phase of the program will focus on providing solar panels to 500,000 extremely poor households in areas that lack access to the power grid. What is Nuclear? EPRI on Renewable Energy: Compressed Air Energy Storage. When it comes to energy storage...If you're talking big hours and big megawatts, if you're going to be moving a lot of low cost night time energy to daytime, if you're talking hundreds of megawatts... 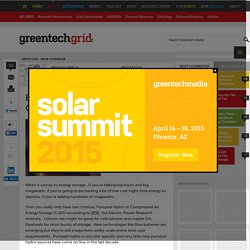 Then you really only have two choices, Pumped Hydro or Compressed Air Energy Storage (CAES) according to EPRI, the Electric Power Research Institute. Lithium-ion might be good for cells phones and maybe EVs. Projekt_0507_engl_internetx.pdf. Www.irena.org/DocumentDownloads/Publications/GA_Booklet_Web. River could light up the continent. The dream of harnessing the mighty Congo River with the world's largest set of dams has come closer, with the World Bank and other financial institutions expected to offer finance, and South Africa agreeing to buy half of the power that is generated. 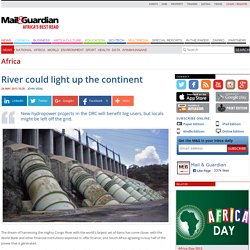 In the past 60 years French, Belgian, Chinese, Brazilian and African engineers have all hoped to dam the river. Researchers create super-efficient, long-lasting battery from wood. Batteries usually contain harsh chemicals that make them less than environmentally friendly, but a new research project out of the University of Maryland seeks to change that, at least on the small-scale. 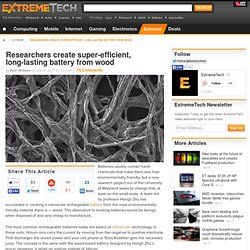 A team led by professor Hongli Zhu has succeeded in creating a nanoscale rechargeable battery from the most environmentally friendly material there is — wood. This alternative to existing batteries would be benign when disposed of and very cheap to manufacture. The most common rechargeable batteries today are based on lithium-ion technology. In these cells, lithium ions carry the current by moving from the negative to positive electrode.

We were wrong about peak oil, but disaster looms anyway. The facts have changed, now we must change too. 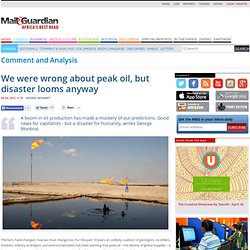 For the past 10 years an unlikely coalition of geologists, oil drillers, bankers, military strategists and environmentalists has been warning that peak oil – the decline of global supplies – is just around the corner. We had some strong reasons for doing so: production had slowed, the price had risen sharply, depletion was widespread and appeared to be escalating. The first of the great resource crunches seemed about to strike.

Tom Zeller Jr.: Ozzie Zehner's 'Green Illusions' Ruffles Feathers. If his goal was to capture attention by tweaking the nose of clean-energy enthusiasts everywhere, Ozzie Zehner might well have succeeded. 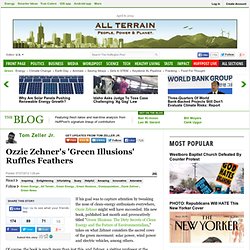 His new book, published last month and provocatively titled "Green Illusions: The Dirty Secrets of Clean Energy and the Future of Environmentalism," takes on what Zehner considers the sacred cows of the green movement: solar power, wind power and electric vehicles, among others. Of course, the book is much more than just this, and Zehner, a visiting professor at the University of California, Berkeley's Science, Technology & Society Center, describes himself as being neither for nor against any particular energy source. Top 7 alternative energies listed - environment - 14 January 2009. The US could replace all its cars and trucks with electric cars powered by wind turbines taking up less than 3 square kilometres - in theory, at least. 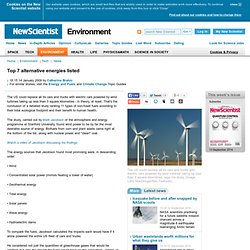 That's the conclusion of a detailed study ranking 11 types of non-fossil fuels according to their total ecological footprint and their benefit to human health. The study, carried out by Mark Jacobson of the atmosphere and energy programme at Stanford University, found wind power to be by far the most desirable source of energy. Big banks turn away small green-energy projects. DEVELOPERS of smaller renewable energy projects will struggle to get financial backing from major commercial banks, according to Rajen Ranchhoojee of Eversheds South Africa. 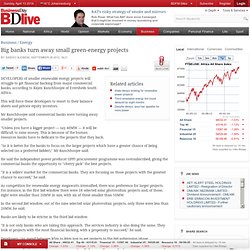 This will force these developers to resort to their balance sheets and private equity investors. Mr Ranchhoojee said commercial banks were turning away smaller projects. Nuclear's Once Bright and Shiny Future Blinks Out. Don't look now, but one of the biggest and most famous industries in the world, nuclear power, once seen as the lynchpin of the future, is reeling yet again after huge political setbacks in Japan and France. Last year's disaster at Fukushima is having an even bigger effect than the Chernobyl disaster of the '80s. The latter could be blamed on the backward old Soviet Union. But Fukushima happened in future-oriented Japan. NPC uneasy with cost of nuclear power. The plan, handed to President Jacob Zuma in Parliament on Wednesday, advocates investigating shale and coalbed methane reserves as a cheaper alternative.

"If gas reserves are proven, and environmental concerns alleviated, then development of these resources and gas-to-power projects should be fast-tracked," it states. "Even if economically recoverable resources are much lower than currently estimated, shale gas as a transitional fuel has the potential to contribute a very large proportion of South Africa's electricity needs. " The commission also calls for building the necessary infrastructure to import liquefied natural gas, and for an increase in hydro-power imports from the region.

The update of the original plan released in November, largely confirms its original predictions of the energy targets the country needs to meet by 2030. UK Report Finds Benefits of Thorium Fission “Overstated” “Thorium has theoretical advantages regarding sustainability, reducing radiotoxicity and reducing proliferation risk,” states the report, prepared for the Department of Energy and Climate Change by the National Nuclear Laboratory (NNL).

NNL remains pessimistic, mostly because UK utility companies aren’t willing to invest the money to fully investigate thorium’s supposed benefits, but will probably continue to spend some resources continuing development of the fuel. The UK Atomic Energy Authority [AEA] built an experimental thorium-fueled reactor in the 60′s, but it’s mostly decommissioned right now. Flibe Energy in the US is building a reactor based on designs developed by the US Department of Energy’s Oak Ridge National Laboratory in the 1960′s. Study: Natural gas is much better than coal. Natural gas may be the most painless way to transition into low-carbon energy, according to a press release from Cornell University. Professor Lawrence M. Cathles of Cornell University has recently published a study called “Assessing the Greenhouse Impact of Natural Gas” in the newest edition of the peer-reviewed journal Geochemistry, Geophysics and Geosystems.

Findings say that, “Although a more rapid transition to natural gas from coal and some oil produces a greater overall benefit for climate change, the 40-percent of low-carbon energy benefit remains no matter how quickly the transition is made, and no matter the effect of ocean modulation or other climate regulating forces.”

Fracking plans 'flawed': lobby group. Fracking will save us: Cabinet drops moratorium. Gas could satisfy most of South Africa's power needs. This is important because South Africa's industrialisation was built on cheap and abundant electricity supplies, cheap and abundant coal reserves and the low cost of building coal-fired power stations back then. Safe Nuclear Power Plant For Use in Space Designed by Teenager. Do nuclear power plants need a redesign? Critics of nuclear energy seem to think so, and so does nuclear energy advocate, Taylor Wilson.

A physics wunderkind, Wilson became the youngest person to ever create fusion at age 14. Cheaper green energy storage solution invented by Calgary profs - Technology & Science. Breakthrough in hydrogen fuel production could revolutionize alternative energy market. BLACKSBURG, Va., April 4, 2013 – A team of Virginia Tech researchers has discovered a way to extract large quantities of hydrogen from any plant, a breakthrough that has the potential to bring a low-cost, environmentally friendly fuel source to the world.