"Fake News" Resources - Teaching Kids News. WE CAN ZOOM INTO YOUR CLASSROOM! 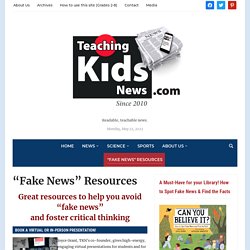 We do super-interesting, informative and engaging virtual presentations, for students and for educators, as well as keynotes and presentations to educators, on “fake news,” how to spot it and how to avoid it. To find out more about booking Joyce Grant for a virtual visit, please CLICK HERE. Visit this page often; we update it regularly. The most recent resources are at the top, (labelled NEW!) After these online games. Classroom connection: 'Plandemic' brings conspiracy theory mainstream — News Literacy Project.

The 26-minute video Plandemic which pushed an array of dangerous and provably false conspiracy theories and other misinformation about the COVID-19 pandemic ignited fringe communities last week and went massively viral before major social media companies took steps to remove it from their platforms. 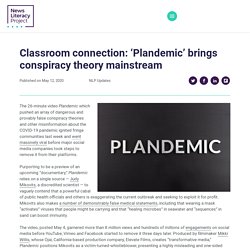 Untitled. Developing Critical Literacies: What We Need to Know in a “Fake News” World – Canadian School Libraries Journal. By Alec Couros and Katia Hildebrandt Those of us who grew up in a pre-Internet world probably remember passing through grocery store checkout aisles lined with copies of the National Enquirer and other tabloids, with outrageous headlines proclaiming “BAT CHILD FOUND IN CAVE,” “HILLARY CLINTON ADOPTS ALIEN BABY,” or “DOLPHIN GROWS HUMAN ARMS.” 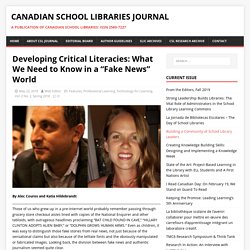 Even as children, it was easy to distinguish those fake stories from real news, not just because of the sensational claims but also because of the telltale fonts and the obviously manipulated or fabricated images. Looking back, the division between fake news and authentic journalism seemed quite clear. In today’s world, however, the line between real and fake seems increasingly blurred and uncertain. Calling Bullshit — Videos. In Spring 2017, we taught the course for the first time as a series of ten hour-long lectures.

These lectures were recorded using multiple cameras and edited to form a video series. We have divided up every lecture into a set of a shorter segments; each segment should more or less stand alone on its own merits. The full playlist of all course videos is available on the UW Information School's YouTube channel. Lecture 1: An Introduction to Bullshit March 29, 2017 1.1 Introduction to Bullshit.Bullshit is everywhere, and we've had enough. 1.2 Calling Bullshit on Ourselves.Jevin uses data graphics to boast about explosive growth at our website callingbullshit.org — and Carl calls bullshit. Hero Pig Saves A Drowning Goat. False status updates go viral. Around the worldAustralia: Facebook said on Wednesday that it opposes a proposal made in December by the Australian Competition and Consumer Commission that the regulatory agency have the power to investigate how news and advertising is ranked on the platform. 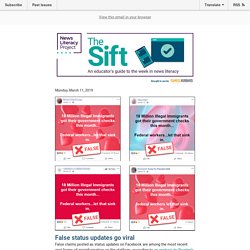 Facebook says that it is not primarily a channel for news distribution, that such a government-regulated ranking system would end up favoring some publishers over others, and that “people, and not regulators,” should decide what they see. Canada: In advance of federal elections later this year, Google said it would simply ban political ads rather than comply with legislation passed in December (and soon to become law) that would require it to keep a registry of all political or partisan ads it publishes directly or indirectly.

Romania: Facebook on Thursday removed four pages, 24 accounts and a public group coordinating to present themselves as news sites and sowing divisive materials that favored the ruling party. 2019 Goal – More News Literacy! – Don't Shush Me! Can you tell fact from fiction in the news? Most students can't. Have you clicked through to this article from your news feed? 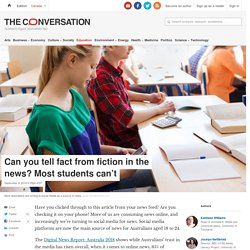 Are you checking it on your phone? More of us are consuming news online, and increasingly we’re turning to social media for news. Social media platforms are now the main source of news for Australians aged 18 to 24. News games: engaging tools for fighting misinformation – News Co/Lab. The purpose of Bad News is to gain a social media following while earning six different badges like Emotion and Impersonation. 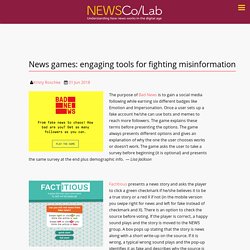 Once a user sets up a fake account he/she can use bots and memes to reach more followers. The game explains these terms before presenting the options. The game always presents different options and gives an explanation of why the one the user chooses works or doesn’t work. The game asks the user to take a survey before beginning (it is optional) and presents the same survey at the end plus demographic info. — Lisa Jackson Factitious. How to teach your kids to tell fact from fake news - Marianne Stenger - ABC Splash - Parents play an important role in teaching their kids how to critically evaluate the news. 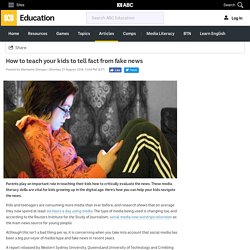 These media literacy skills are vital for kids growing up in the digital age. Here's how you can help your kids navigate the news. Kids and teenagers are consuming more media than ever before, and research shows that on average they now spend at least six hours a day using media. The type of media being used is changing too, and according to the Reuters Institute for the Study of Journalism, social media now outstrips television as the main news source for young people. How To Spot Fake News. Critical thinking is a key skill in media and information literacy, and the mission of libraries is to educate and advocate its importance. Discussions about fake news has led to a new focus on media literacy more broadly, and the role of libraries and other education institutions in providing this.

When Oxford Dictionaries announced post-truth was Word of the Year 2016, we as librarians realise action is needed to educate and advocate for critical thinking – a crucial skill when navigating the information society. IFLA has made this infographic with eight simple steps (based on FactCheck.org’s 2016 article How to Spot Fake News) to discover the verifiability of a given news-piece in front of you. Download, print, translate, and share – at home, at your library, in your local community, and on social media networks. The more we crowdsource our wisdom, the wiser the world becomes. Download the infographic.

HOW TO SPOT FAKE IMAGES ANYWHERE ON THE INTERNET. By Henk van Ess Timmi Allen is one of the best image and video analyzers in the world. The 3D graphic artist from Berlin has done what the police couldn’t: He deciphered a license plate that played a role in the murder of Ukrainian journalist Pavel Sheremet. And he found out more about who is behind the crash of Malaysia Airlines Flight 17. “Images have a strong effect on our perception," Allen said. “Most people are not able to detect a digital altered picture.” Forget deepfakes: Misinformation is showing up in our most personal online spaces. Over the past six months, First Draft has been involved in projects monitoring information disorder circulating in the lead up to two elections — the Brazilian presidential election and the U.S. midterms. 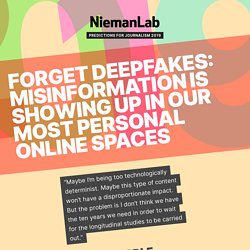 Misinformation is still a serious problem, but it’s not the 100 percent fabricated stories that got so much press in 2016. Most of what we saw in both countries was content based on a kernel of truth. It was genuine but recycled content; it was imagery taken out of context; it was the use of statistics in ways that could be misread easily by the audience. Rather than text articles, much of this content was shared as standalone visual posts on Facebook, Twitter, Instagram, and WhatsApp. This type of content took advantage of deep partisan divisions and was designed to reinforce positions and denigrate the other side. Instead, I’m very worried about the drip, drip, drip of these divisive hyperpartisan memes on society.

Maybe I’m being too technologically determinist. So, you think you've spotted some 'fake news' — now what?