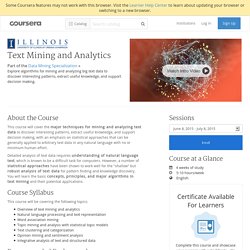 Detailed analysis of text data requires understanding of natural language text, which is known to be a difficult task for computers. However, a number of statistical approaches have been shown to work well for the "shallow" but robust analysis of text data for pattern finding and knowledge discovery. You will learn the basic concepts, principles, and major algorithms in text mining and their potential applications. Course Syllabus This course will be covering the following topics: Recommended Background. HTML Tutorials for the Complete Idiot. Small Change. At four-thirty in the afternoon on Monday, February 1, 1960, four college students sat down at the lunch counter at the Woolworth’s in downtown Greensboro, North Carolina. 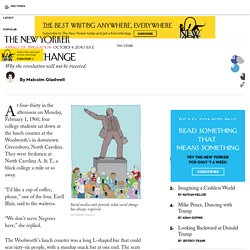 They were freshmen at North Carolina A. & T., a black college a mile or so away. What Facebook's 'It's Not Our Fault' Study Really Means. Yesterday in the journal Science, members of the Facebook data science team released a provocative study about adult Facebook users in the US “who volunteer their ideological affiliation in their profile.” 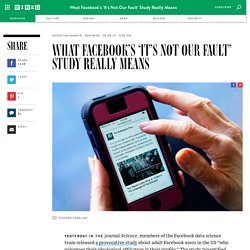 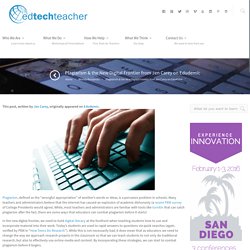 Plagiarism, defined as the “wrongful appropriation” of another’s words or ideas, is a pervasive problem in schools. Many teachers and administrators believe that the internet has caused an explosion of academic dishonesty (a recent PEW survey of College Presidents would agree). While, most teachers and administrators are familiar with tools like turnitin that can catch plagiarism after the fact, there are some ways that educators can combat plagiarism before it starts! In the new digital frontier, we need to hold digital literacy at the forefront when teaching students how to use and incorporate material into their work. Today’s students are used to rapid answers to questions via quick searches (again, verified by PEW in “How Teens Do Research”).

Journal of Information Literacy. Beall’s List of Predatory Publishers 2013. By Jeffrey Beall Released December 4, 2012 The gold open-access model has given rise to a great many new online publishers. 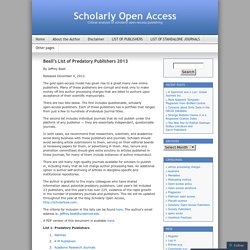 Many of these publishers are corrupt and exist only to make money off the author processing charges that are billed to authors upon acceptance of their scientific manuscripts. There are two lists below. The first includes questionable, scholarly open-access publishers. The second list includes individual journals that do not publish under the platform of any publisher — they are essentially independent, questionable journals. Predatory Open Access Publishers. Background The term 'predatory' in the sense of using dishonest business practices in open access publishing was first used and largely defined by Jeffrey Beall, an expert in library science, in 'Beall's list of potential, possible, or probably predatory scholarly open-access publishers': 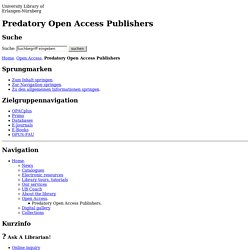 ‫עופר גביש בערוץ 10 טיול מזמר אל קברי צדיקים 1‬‎ Kuhlthau. Carol Kuhlthau. In the first stage, initiation, a person becomes aware of a gap in knowledge or a lack of understanding, where feelings of uncertainty and apprehension are common. 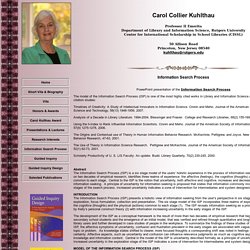 At this point,the task is merely to recognize a need for information. Thoughts center on contemplating the problem, comprehending the task, and relating the problem to prior experience and personal knowledge. Actions frequently involve discussing possible avenues of approach or topics to pursue. In the second stage, selection, the task is to identify and select the general topic to be investigated and the approach to be pursued.

Feelings of uncertainty often give way to optimism after the selection as been made and there is a readiness to begin the search. POST data. As We May Think. As Director of the Office of Scientific Research and Development, Dr. 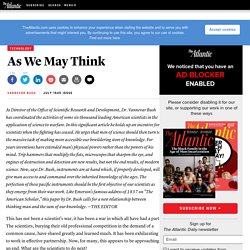 Vannevar Bush has coordinated the activities of some six thousand leading American scientists in the application of science to warfare. In this significant article he holds up an incentive for scientists when the fighting has ceased. He urges that men of science should then turn to the massive task of making more accessible our bewildering store of knowledge. For years inventions have extended man's physical powers rather than the powers of his mind.