ReadersMagnet Review: Apostasy Can Lead a Nation to Self-Destruct. The story of Ancient Israel is one of the remarkable sagas in the Holy Bible. 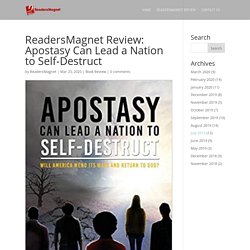 It follows the story of a people whose journey into nationhood was revealed by God to Abraham. In the bible, we learn about their journey to Egypt following a famine. The 12 sons of Jacob became the 12 tribes of Israel that would later be enslaved by a new pharaoh. God would later deliver them from bondage and help the Israelites build a nation of their own. However, their covenant with God would soon end. A Tale of Two Great Nations Philip Wittig’s Apostasy Can Lead a Nation to Self-Destruct: Will America Mend Its Ways and Return to God? How to Make Your Adventure Novel More Exciting? - Anita Fisk. Anita Fisk’s The Healing Bowl: A Harley and Friends Adventure is an innovative adventure novel about seventh-graders Harley Delosian and his best friend T.J. 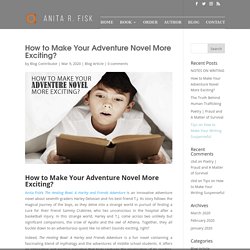 Its story follows the magical journey of the boys, as they delve into a strange world in pursuit of finding a cure for their friend Sammy Crabtree, who lies unconscious in the hospital after a basketball injury. In this strange world, Harley and T.J. come across two unlikely but significant companions, the crow of Apollo and the owl of Athena. Together, they all buckle down to an adventurous quest like no other!

Sounds exciting, right? Indeed, The Healing Bowl: A Harley and Friends Adventure is a fun novel containing a fascinating blend of mythology and the adventures of middle school students. Write artistically Your style of writing determines how your novel will be presented to the readers. Focus on your plot Avoid clichés. ReadersMagnet Review: 5 Books to Read during the Coronavirus Quarantine. As of this writing, the coronavirus known as COVID-19 has spread across the globe. 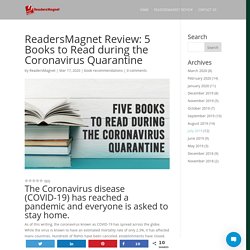 While the virus is known to have an estimated mortality rate of only 2.3%, it has affected many countries. Hundreds of flights have been canceled, establishments have closed, and in some regions, people are beginning to panic. In the United States, COVID-19 has been detected in 18 states. Governments and medical institutions around the world are trying their best to contain the COVID-19 and find the cure for the pandemic that is already affecting over 160 countries. Citizens are asked to stay safe and avoid contact with other people especially those who carry the flu-like symptoms of the coronavirus. The Pros of Writing Science Fiction - Len Stage. Science fiction is one of the most creative genres in literature. 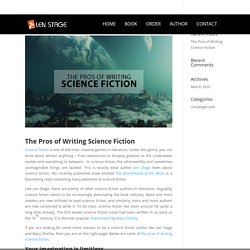 Under this genre, you can write about almost anything – from adventures in faraway galaxies to the underwater worlds and everything in between. In science fiction, the otherworldly and sometimes unimaginable things are tackled. This is exactly what author Len Stage loves about science fiction. His recently published book entitled The Brotherhood of the Wone is a fascinating read containing many elements of science fiction. Like Len Stage, there are plenty of other science fiction authors in literature. If you are looking for some more reasons to be a science fiction author like Len Stage and Mary Shelley, then you are on the right page! A Brief Guide on Spiritual Healing - Eric Alsterberg.

Healing and Transformation: Moving from the Ordinary to the Extraordinary is a comprehensive how-to-manual that emphasizes the importance of spiritual healing by Eric Alsterberg. 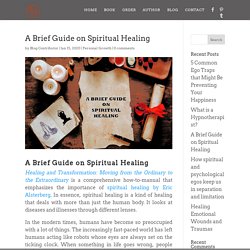 In essence, spiritual healing is a kind of healing that deals with more than just the human body. It looks at diseases and illnesses through different lenses. In the modern times, humans have become so preoccupied with a lot of things. The increasingly fast-paced world has left humans acting like robots whose eyes are always set on the ticking clock. Common Challenges Encountered by Caregivers - Eleanor Gaccetta. Rediscovering Your Passion for Writing - Attilio Guardo - Romance Writer. Rediscovering Your Passion for Writing Attilio Guardo is an author whose love for writing began at an early age. 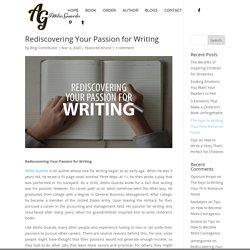 When he was 9 years old, he wrote a 55-page novel entitled Three Ways. At 11, he then wrote a play that was performed in his backyard. As a child, Attilio Guardo knew for a fact that writing was his passion. Childrens Books. ReadersMagnet Review: Children’s Books on Seasons. Children’s illustrated books are not only for entertainment. 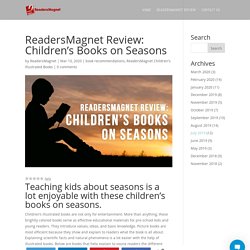 More than anything, these brightly colored books serve as effective educational materials for pre-school kids and young readers. They introduce values, ideas, and basic knowledge. Picture books are most efficient because they show and explain to readers what the book is all about. Explaining scientific facts and natural phenomena is a lot easier with the help of illustrated books. Below are books that help explain to young readers the different seasons in a year. Typing Right - Benefits of Having Keyboarding Skills. Typing Right Blog Typing is a very useful skill nowadays. 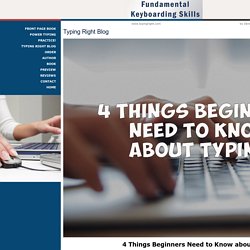 As computers and mobile phones slowly take over the world, it is important for you to learn the fundamentals of typing. When you know how to type, you can do so many things with quite an ease, which is utterly necessary in this increasingly fast-paced world. In schools or businesses, for example, knowing how to type allows you to create your reports and write your essays and papers in no time. When it comes to your personal relationships, on the other hand, typing lets you communicate easily, without much inconvenience. BOOK - Eloise Of Westhaven by JEAN ARCHAMBAULT-WHITE. Eloise had stumbled upon a rough gang of men conspiring to rob the bank, and had been caught at it by those very same men. 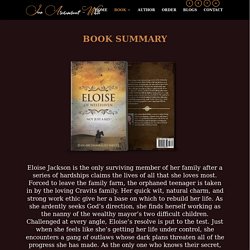 Her quick wits and storytelling abilities—and most of all her frantic prayers—had gotten her out of it all. She had managed to convince them—she still didn’t believe that she had convinced them—that she wanted to go with them as an adventure. They had believed her! They must have had foolish pride enough to believe anyone would want to join their nasty lives, even an innocent girl. Arnold`s book blaze of dragon. Available Books: Dangerous Legacy, the Second Son (a novel) Received the Editor’s Choice Award. 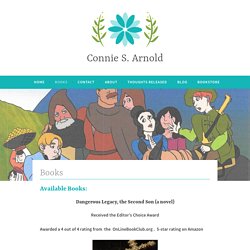 Writing Action Scenes in Fantasy Fiction - Collette Jackson-Fink. I love action movies. When I began writing Daughters of Twilight, I knew there was going to be a lot of action, and the story will be fast-paced. I wanted the story to move while it engages readers page by page, scene by scene, and dialogue by dialogue. Building a plot has never been this challenging and satisfying. The need for action scenes. One Caregiver's Journey - Eleanor Gaccetta. Daughters of Twilight by Collette Jackson-Fink. Healing and Transformation - Dr. Eric Alsterberg. The Other Side of Love - Attilio Guardo - Romance Writer. Denise Chambers - Fundamental Keyboarding Skills: From The Typewriter To The Computer. ReadersMagnet Review. Connie S. Arnold.