The world average temperature is rising due to the greenhouse effect caused by increasing levels of greenhouse gases, especially carbon dioxide.

Women will suffer the worst effects of climate change. Extreme Weather, Climate Change. When it comes to connecting the dots between climate change, extreme weather and health, the lines are clear. 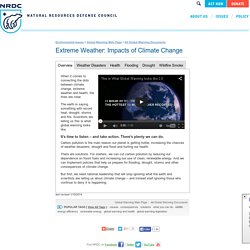 The earth is saying something with record heat, drought, storms and fire. Scientists are telling us this is what global warming looks like. It's time to listen – and take action. There's plenty we can do. Global Warming Effects and Threats on Human Health. Water Sustainability - Water Supply at Risk. Environmental Issues > Global Warming Main Page > All Global Warming Documents Current Water Demands Are Not Sustainable Climate change will have a significant impact on the sustainability of water supplies in the coming decades. 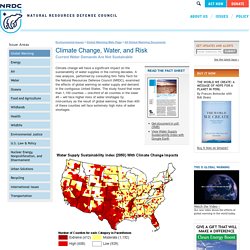 A new analysis, performed by consulting firm Tetra Tech for the Natural Resources Defense Council (NRDC), examined the effects of global warming on water supply and demand in the contiguous United States. The study found that more than 1,100 counties -- one-third of all counties in the lower 48 -- will face higher risks of water shortages by mid-century as the result of global warming. 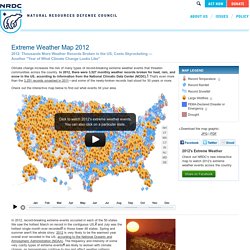 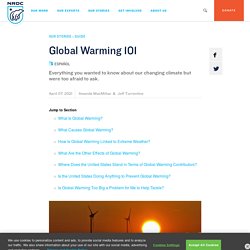 A: Global warming occurs when carbon dioxide (CO2) and other air pollutants collect in the atmosphere and absorb sunlight and solar radiation that have bounced off the earth’s surface. Normally, this radiation would escape into space—but these pollutants, which can last for years to centuries in the atmosphere, trap the heat and cause the planet to get hotter. Economic Loss and Damage. Declining crop yields could put hundreds of thousands of people at risk for starvation. 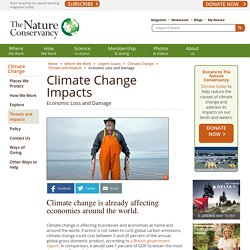 Climate change is affecting businesses and economies at home and around the world. If action is not taken to curb global carbon emissions, climate change could cost between 5 and 20 percent of the annual global gross domestic product, according to a British government report. Climate change and human health. As temperatures rise, so do the risks of heat-related illness and even death for the most vulnerable human populations. 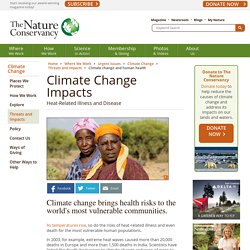 In 2003, for example, extreme heat waves caused more than 20,000 deaths in Europe and more than 1,500 deaths in India. Scientists have linked the deadly heat waves to climate change and warn of more to come. In addition to heat-related illness, climate change may increase the spread of infectious diseases, mainly because warmer temperatures allow disease-carrying insects, animals and microbes to survive in areas where they were once thwarted by cold weather.

Diseases and pests that were once limited to the tropics — such as mosquitoes that carry malaria — may find hospitable conditions in new areas that were once too cold to support them. Climate Change Impact on Storms. Scientific research indicates that climate change will cause hurricanes and tropical storms to become more intense — lasting longer, unleashing stronger winds, and causing more damage to coastal ecosystems and communities. 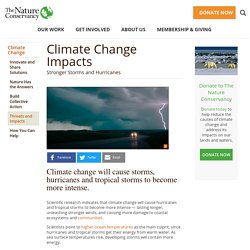 Scientists point to higher ocean temperatures as the main culprit, since hurricanes and tropical storms get their energy from warm water. As sea surface temperatures rise, developing storms will contain more energy. Drought, Fire, Floods. Climate change is intensifying the circulation of water on, above and below the surface of the Earth — causing drought and floods to be more frequent, severe and widespread. 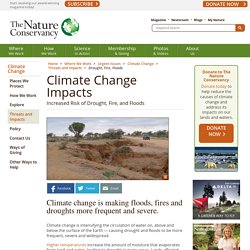 Higher temperatures increase the amount of moisture that evaporates from land and water, leading to drought in many areas. Lands affected by drought are more vulnerable to flooding once rain falls. About the Impacts of Climate Change. As the Earth heats up, sea levels rise because warmer water takes up more room than colder water, a process known as thermal expansion. 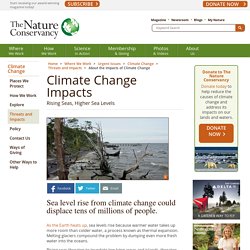 Melting glaciers compound the problem by dumping even more fresh water into the oceans. Rising seas threaten to inundate low-lying areas and islands, threaten dense coastal populations, erode shorelines, damage property and destroy ecosystems such as mangroves and wetlands that protect coasts against storms. Wildlife at Risk From Climate Change. Changing landscapes. Rising temperatures and changing patterns of rain and snow are forcing trees and plants around the world to move toward polar regions and up mountain slopes. These vegetation shifts will undermine much of the work the conservation community has accomplished to date, with the potential to permanently change the face of Conservancy preserves, local land trusts, and even our national parks. In the tundra, thawing permafrost will allow shrubs and trees to take root. In the Great Plains of the United States, grasslands will likely become forests. And New England’s fiery fall foliage will eventually fade as maple and beech forests shift north toward cooler temperatures.

As plant communities try to adjust to the changing climate by moving toward cooler areas, the animals that depend on them will be forced to move. Some species and communities such as polar bears and alpine meadows may be left without any remaining viable habitat, putting much of our treasured wildlife at risk. Higher Temperatures. Heat-trapping gases emitted by power plants, automobiles, deforestation and other sources are warming up the planet. In fact, the five hottest years on record have all occurred since 1997 and the 10 hottest since 1990, including the warmest years on record – 2005 and 2010. High temperatures are to blame for an increase in heat-related deaths and illness, rising seas, increased storm intensity, and many of the other dangerous consequences of climate change.

During the 20th century, the Earth’s average temperature rose one degree Fahrenheit to its highest level in the past four centuries – believed to be the fastest rise in a thousand years. Scientists project that if emissions of heat-trapping carbon emissions aren’t reduced, average surface temperatures could increase by 3 to 10 degrees Fahrenheit by the end of the century. Climate Change Impacts & Threats. Climate Change Impacts & Threats. Effects. Global climate change has already had observable effects on the environment. Glaciers have shrunk, ice on rivers and lakes is breaking up earlier, plant and animal ranges have shifted and trees are flowering sooner.

Effects that scientists had predicted in the past would result from global climate change are now occurring: loss of sea ice, accelerated sea level rise and longer, more intense heat waves. How Climate Change Started - The Earth Story (Animation) Cyclone Pam: solutions to the human cost of climate change. “No man is an island,” wrote the English poet John Donne. Climate change making droughts in Australia worse as rain patterns shift. Climate change is making drought conditions in south-west and south-east Australia worse, with serious ramifications for people’s health and the agriculture industry, a new paper has warned.

The Climate Council report states that since the mid-1990s, south-east Australia has experienced a 15% drop in rainfall during late autumn and early winter, with a 25% slump in average rainfall in April and May. A drought that has gripped western Queensland and northern New South Wales since 2012 has put pressure on farmers and forced wildlife into starvation. Keep it in the Ground campaign: six things we've learned. Texas city opts for 100% renewable energy – to save cash, not the planet. News that a Texas city is to be powered by 100% renewable energy sparked surprise in an oil-obsessed, Republican-dominated state where fossil fuels are king and climate change activists were described as “the equivalent of the flat-earthers” by US senator and GOP presidential hopeful Ted Cruz.

“I was called an Al Gore clone, a tree-hugger,” says Jim Briggs, interim city manager of Georgetown, a community of about 50,000 people some 25 miles north of Austin. Briggs, who was a key player in Georgetown’s decision to become the first city in the Lone Star State to be powered by 100% renewable energy, has worked for the city for 30 years. He wears a belt with shiny silver decorations and a gold ring with a lone star motif, and is keen to point out that he is not some kind of California-style eco-warrior with a liberal agenda. In fact, he is a staunchly Texan pragmatist. “I’m probably the furthest thing from an Al Gore clone you could find,” he says. “Sun will, though. Russell Brand and Naomi Klein join forces for This Changes Everything live.

The system isn’t going to change things for us because for the system, things are working. Exxon don’t need a revolution. The systems are set up to prevent genuine true change happening. Keep it in the ground: a poem by Carol Ann Duffy.