The Best Met Gala Bathroom Selfies: Shop the Look. The bathroom selfie is a polarizing topic. 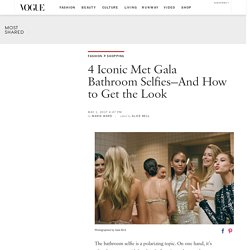 On one hand, it’s often better to avoid the ultra–lo-fi setting unless you have a couple hundred thousand followers who don’t mind (or 98.9 million like Kim Kardashian West, who frequently shoots in front of the sink). But what about when it’s the Met Gala? The ladies’ room at the Metropolitan Museum of Art has a storied reputation—the one place where it’s entirely acceptable, even encouraged, to take a toilet-side snap. Year after year, celebrities gather for an impromptu photo shoot and earn countless Instagram likes. It reads like a master class in bathroom selfie style, with plenty of tips worth rolling into your repertoire. If you’re feeling more like a Cara Delevingne, why not choose a studded one-shoulder Versus Versace dress and several swipes of e.l.f. eyeliner to get that same smoky eye? Katerina Jebb x Comme des Garçons Perfume.

For Comme des Garçons' latest eponymous fragrance, an unusual blend of rose oxides, lilac, hawthorn and Scotch Tape, it seems wholly appropriate they decided to accompany its release with an unconventional beauty campaign. 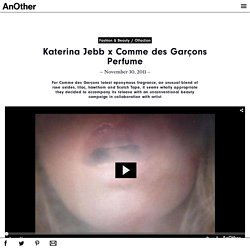 Inspired by the series, Comme des Garçons invited her to create a film in the same vein, but this time focused on a purchasable product. The result: the fake ads cleverly intercut with the Comme-focused ad entitled We Can Find Beautiful Things Without Consciousness. René Burri on Rei Kawakubo & Picasso. "It all began because Rei Kawakubo found me. 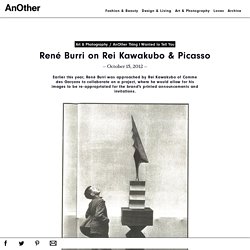 She has an incredible sense of going beyond. When she sent me the first designs, I was amazed because she owned all of my old books. Even the ones from the 1960s, that I did on Germany. She took my work, respected the images and made them into collages in a very interesting way. It is almost like recycling. "Looking back, I didn't have the patience to work in fashion. It took me six years to get close to Picasso. In 1955, when Swiss photographer René Burri became a freelancer for Magnum, he helped to redefine photojournalism. Obsessive Collectors Archive. Sonomama Sonomama, el experimento fotográfico de Taishi Hirokawa. A mediados de los ’80, el fotógrafo japonés Taishi Hirokawa desarrolló una original idea que trasladó a Ehime, en la localidad de Shikoku, Japón. 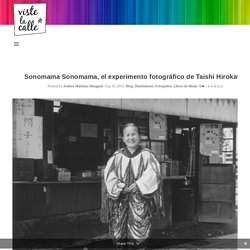 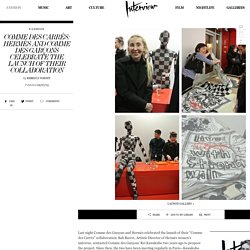 Bali Barret, Artistic Director of Hermès women's universe, contacted Comme des Garçons' Rei Kawakubo two years ago to propose the project. Since then, the two have been meeting regularly in Paris—Kawakubo visits the city regularly for the Comme des Garçons shows—to pour over the Hermès archives and discuss the fine points of silk scarf savoir faire. Transformed by Kawakubo with layers of abstract and geometric patterns, and scrawled words, the first series of "Comme des Carrés," appropriately titled "Black and White," launches exclusively today at CDG store in New York.

Another "Colour" series of six scarves will be available at Dover Street Market in London and in Tokyo. These Kids Don't Know Anything About CDG at the Supreme x CDG Drop. Jk5, the tattoo artist who seduced rei kawakubo. New York tattooist and multidisciplinary artist Joseph Aloi, better known as JK5, has just landed one of the coolest gigs in fashion. 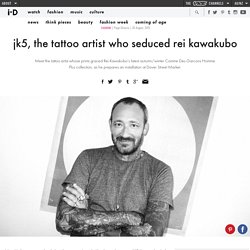 After seeing his monograph with Rizzoli last September, designer Rei Kawakubo of Comme Des Garçons reached out, requesting his sketchbooks to be featured in an upcoming line. There was one condition: that she have full creative control over what was used and how. He wouldn't know how it was incorporated until he saw it on the runway along with everyone else. Fashion in a box : furniture design : f system : hedi slimane : exhibition : comme des garçon : dover street market. This is f system designed in 2007 by the hedi slimane, the former head of dior homme . it was designed for an exhibition at the comme des garçon london store, dover street market. the seven pieces were hand made in stainless steel and and ebony and came in limited editions of 10. 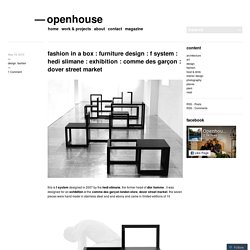 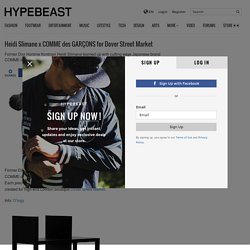 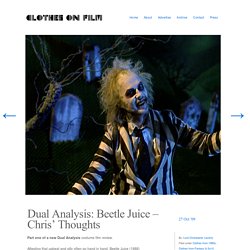 Attesting that upbeat and silly often go hand in hand, Beetle Juice (1988) stands as one of director Tim Burton’s most cheerfully insane projects. If its blend of fantasy, horror, comedy proves too much for some, then the imaginative costumes by Aggie Guerard Rodgers and Bo Welch’s vibrant production design save the film from merely a cult following. Yet there is so much to see in Beetle Juice that the real enjoyment comes from re-viewing. This spooky tale revolves around the recently deceased Maitlands, Adam (Alec Baldwin) and Barbara (Geena Davis). Just coming to terms with dying and forced to spend 125 years stuck inside their old house, this quaint country couple also have to put up with the new, very much alive proprietors. Tired of this intrusion, Adam and Barbara want their awful tenants out of their house for good (the grown ups anyway, they gain an affinity with Lydia). Jeffrey Jones’ costumes were a designer mix. On the Verge: Xavier Dolan - Video. Comme Des Garçons. 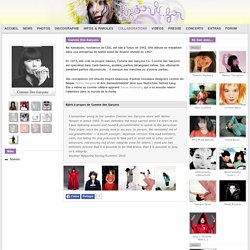 Elle débute en travaillant dans une entreprise de textile avant de devenir styliste en 1967. En 1973, elle créé sa propre maison, Comme des Garçons Co. Comme des Garçons est spécialisé dans l’anti-fashion, austère, parfois dérangeant même. Power Of Witches - SHOWstudio - The Home of Fashion Film. Dual Analysis: Beetle Juice – Chris’ Thoughts. IS MENTAL: Daylight come and me wan' go home. Last weekend I was beyond stoked to go see the Tim Burton exhibit at MOMA. It ended up a big fail though as neither I nor my friends realized you had to buy advance tickets online and pick a time since this is a "SPECIAL" exhibition. Of course they were sold out for the rest of the weekend! Seeing as Burton was already on my mind, I decided to put on one of the best movies of all time: Beetlejuice.

I never get tired of this flick and find something new every time I watch it. This time I noticed Catherine O'Hara aka Delia Deetz's costumes were pretty damn spectacular, which they kind of have to be to get the character's strong personality across. AMAZING glove turban..such drama! I'd rock the hell out of this shirt if I had it...betting it's a CDG creation. Look- drop crotch pants! This look was perfection- I tried to find a frame of the whole outfit but couldn't get much more than the top half. You couldn't get more "snobby 80s artist type with money in the bank" than this. Dutch Profiles: Vlisco. Dutch Profile: Vlisco. COMME des GARCONS for H&M Japan Release - nitrolicious.com. JULIEN D'YS. Prada's Vintage-Inspired Separates for a New Dover Street Market. Costureras gallegas para Comme des Garçons >> Delitos y faldas.