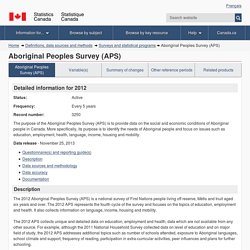 More specifically, its purpose is to identify the needs of Aboriginal people and focus on issues such as education, employment, health, language, income, housing and mobility. Data release - November 25, 2013 Description The 2012 Aboriginal Peoples Survey (APS) is a national survey of First Nations people living off reserve, Métis and Inuit aged six years and over. The 2012 APS represents the fourth cycle of the survey and focuses on the topics of education, employment and health. The 2012 APS collects unique and detailed data on education, employment and health, data which are not available from any other source. The APS provides key statistics to inform policy and programming activities aimed at improving the well-being of Aboriginal Peoples. Subjects. Prototype apartment building coming to housing-strapped Nain - Newfoundland & Labrador.

In a coastal Labrador community where housing is sparse, a new six-unit building currently being planned could make a big difference. 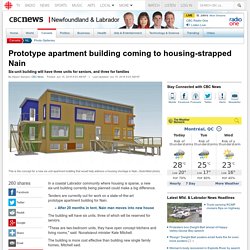 Tenders are currently out for work on a state-of-the-art prototype apartment building for Nain. After 20 months in tent, Nain man moves into new house The building will have six units, three of which will be reserved for seniors. "These are two-bedroom units, they have open concept kitchens and living rooms," said Nunatsiavut minister Kate Mitchell. The building is more cost effective than building new single family homes, Mitchell said. "With the limited availability of good building land and the cost of developing subdivisions and lots within Nunatsiavut, we're looking at $200,000 for a lot, so to us it just makes sense. " The multi-family units will be designed with local climate and traditional ways of living in mind, as well as ensuring accessibility for elders. 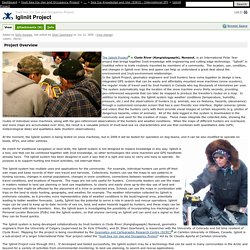 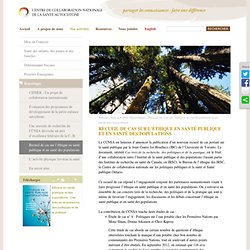 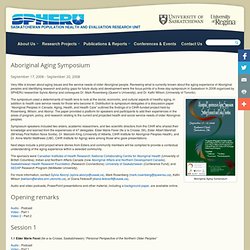 Reviewing what is currently known about the aging experience of Aboriginal peoples and identifying research and policy gaps for future study and development were the focus points of a three-day symposium in Saskatoon in 2008 organized by SPHERU researcher Sylvia Abonyi and colleagues Dr. Mark Rosenberg (Queen’s University), and Dr. Kathi Wilson (University of Toronto). Aboriginal Aging Symposium The symposium used a determinants of health lens to look at the social, economic, and cultural aspects of healthy aging, in addition to health care service needs for those who become ill. Symposium speakers included two elders, academic researchers, and two scientific directors from the CIHR who shared their knowledge and learned from the experiences of 47 delegates. Opening remarks. NeuRA - Medical Research Institute. What is it that helps one person age successfully and cause another to develop age-related diseases like dementia? 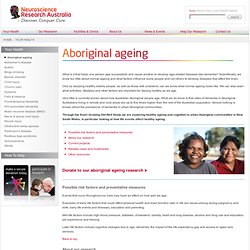 Scientifically, we know too little about normal ageing and what factors influence some people and not others to develop diseases that affect the brain. Only by studying healthy elderly people, as well as those with problems, can we know what normal ageing looks like. We can also learn what activities, lifestyles and other factors are important for staying healthy as we age. Very little is currently known about how Australian Aboriginal people age. What we do know is that rates of dementia in Aboriginal Australians living in remote and rural areas are up to five times higher than the rest of the Australian population. La chaire. Accueil.