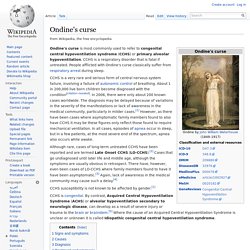 CCHS is a respiratory disorder that is fatal if untreated. People afflicted with Ondine's curse classically suffer from respiratory arrest during sleep. CCHS is a very rare and serious form of central nervous system failure, involving a failure of autonomic control of breathing. About 1 in 200,000 live born children become diagnosed with the condition[citation needed]. In 2006, there were only about 200 known cases worldwide. Although rare, cases of long-term untreated CCHS have been reported and are termed Late Onset CCHS (LO-CCHS).[2] Cases that go undiagnosed until later life and middle age, although the symptoms are usually obvious in retrospect. 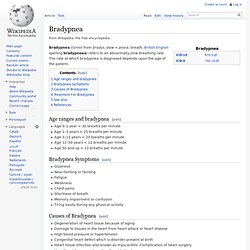 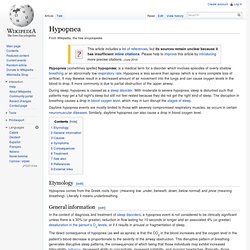 Hypopnea is less severe than apnea (which is a more complete loss of airflow). It may likewise result in a decreased amount of air movement into the lungs and can cause oxygen levels in the blood to drop. It more commonly is due to partial obstruction of the upper airway. During sleep, hypopnea is classed as a sleep disorder. With moderate to severe hypopnea, sleep is disturbed such that patients may get a full night's sleep but still not feel rested because they did not get the right kind of sleep. Daytime hypopnea events are mostly limited to those with severely compromised respiratory muscles, as occurs in certain neuromuscular diseases. 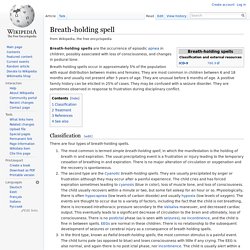 Breath-holding spells occur in approximately 5% of the population with equal distribution between males and females. They are most common in children between 6 and 18 months and usually not present after 5 years of age. They are unusual before 6 months of age. Snoring. Snoring sound production is most often from the soft palate (indicated by the black arrow) and uvula (the gray). 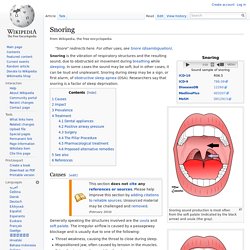 Snoring. Note that the snoring sound is most often caused by the vibration of the soft palate and the uvula. Snoring is the vibration of respiratory structures and the resulting sound, due to obstructed air movement during breathing while sleeping. In some cases the sound may be soft, but in other cases, it can be loud and unpleasant. En.wikipedia. Holotropic Breathwork[1] (from Greek ὅλος holos "whole" and τρέπειν trepein "to turn or direct towards a thing"; meaning "moving toward wholeness") is a practice that uses breathing and other elements to allow access to non-ordinary states for the purpose of self-exploration. 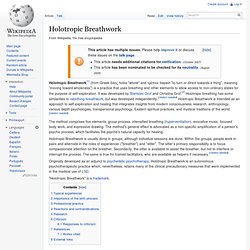 It was developed by Stanislav Grof and Christina Grof.[2] Holotropic breathing has some similarities to rebirthing-breathwork, but was developed independently. [citation needed] Holotropic Breathwork is intended as an approach to self-exploration and healing that integrates insights from modern consciousness research, anthropology, various depth psychologies, transpersonal psychology, Eastern spiritual practices, and mystical traditions of the world. [citation needed] The method comprises five elements: group process, intensified breathing (hyperventilation), evocative music, focused body work, and expressive drawing. Holotropic Breathwork is usually done in groups, although individual sessions are done. Kussmaul breathing. Periodic breathing. Shallow breathing. In upper lobar breathing, clavicular breathing, or clavicle breathing air is drawn predominantly into the chest by the raising of the shoulders and collarbone (clavicles), and simultaneous contracting of the abdomen during inhalation.[1] Maximum amount of air can be drawn this way only for short periods of time, since it requires a lot of effort. 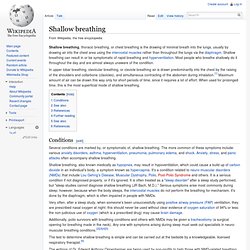 When used for prolonged time, this is the most superficial mode of shallow breathing. Conditions[edit] Shallow breathing, also known medically as hypopnea, may result in hypoventilation, which could cause a build up of carbon dioxide in an individual's body, a symptom known as hypercapnia. It's a condition related to neuro-muscular disorders (NMDs) that include Lou Gehrig's Disease, Muscular Dystrophy, Polio, Post-Polio Syndrome and others. 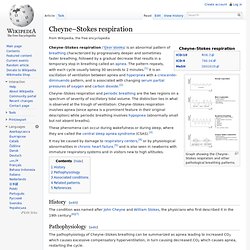 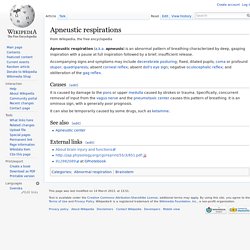 Accompanying signs and symptoms may include decerebrate posturing; fixed, dilated pupils; coma or profound stupor; quadriparesis; absent corneal reflex; absent doll's eye sign; negative oculocephalic reflex; and obliteration of the gag reflex. Causes[edit] It is caused by damage to the pons or upper medulla caused by strokes or trauma. Specifically, concurrent removal of input from the vagus nerve and the pneumotaxic center causes this pattern of breathing. It is an ominous sign, with a generally poor prognosis. It can also be temporarily caused by some drugs, such as ketamine.