A billion-year arms race against viruses shaped our evolution. Kateryna Kon/Science Photo Library Viruses have evolved to invade the cells of plants, animals and other organisms. 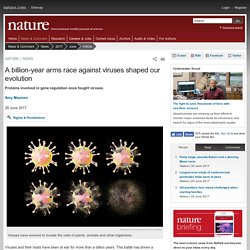 Viruses and their hosts have been at war for more than a billion years. This battle has driven a dramatic diversification of viruses and of host immune responses. Microbiota: a key orchestrator of cancer therapy : Nature Reviews Cancer. The microbiome in early life: implications for health outcomes : Nature Medicine. Recent studies have characterized how host genetics, prenatal environment and delivery mode can shape the newborn microbiome at birth. 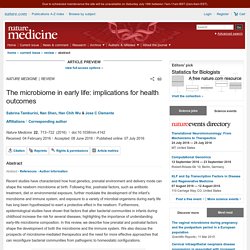 Following this, postnatal factors, such as antibiotic treatment, diet or environmental exposure, further modulate the development of the infant's microbiome and immune system, and exposure to a variety of microbial organisms during early life has long been hypothesized to exert a protective effect in the newborn. Furthermore, epidemiological studies have shown that factors that alter bacterial communities in infants during childhood increase the risk for several diseases, highlighting the importance of understanding early-life microbiome composition. In this review, we describe how prenatal and postnatal factors shape the development of both the microbiome and the immune system. Figures Read the full article. Amoeba. Science - How bacteria make a grappling hook for propulsion.

Bacteria vs virus. Scientists Capture Sneezes In High-Speed Video. Viruses. Second Inexplicable Die Off Of 60,000 Antelopes. Why You Should Stop Using Hand Sanitizer! Watch T Cells Hunt Down And Kill Cancer Cells. Cytotoxic T cells, which researchers describe as ‘serial killers,’ have a pretty important role to play in keeping your body healthy. 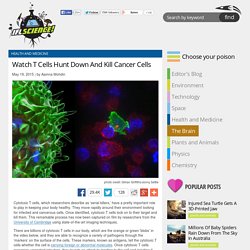 They move rapidly around their environment looking for infected and cancerous cells. Once identified, cytotoxic T cells lock on to their target and kill them. This remarkable process has now been captured on film by researchers from the University of Cambridge using state-of-the-art imaging techniques. There are billions of cytotoxic T cells in our body, which are the orange or green 'blobs’ in the video below, and they are able to recognize a variety of pathogens through the ‘markers’ on the surface of the cells. These markers, known as antigens, tell the cytotoxic T cells whether the cell is carrying foreign or abnormal molecules. Should You Hover Or Cover The Toilet Seat?

Ebola. What The Color Of Your Snot Says About Your Health. It goes by many names: snot, booger, phlegm, mucus. 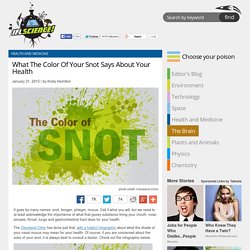 Call it what you will, but we need to at least acknowledge the importance of what that gooey substance lining your mouth, nose, sinuses, throat, lungs and gastrointestinal tract does for your health. The Cleveland Clinic has done just that, with a helpful infographic about what the shade of your nasal mucus may mean for your health. Of course, if you are concerned about the color of your snot, it is always best to consult a doctor. Check out the infographic below. The Cleveland Clinic has also made an infographic about “What The Color of Your Urine Says About Your Health.” Read this next: How Spiders Spin Electrically Charged Threads Photo Gallery. Environment, more than genetics, shapes immune system. Why did you get the flu this winter, but your co-workers didn’t? 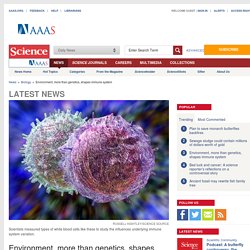 The answer, according to a new study of twins, may have less to do with your genes and more to do with your environment—including your past exposure to pathogens and vaccines. Our immune system is incredibly complex, with diverse armies of white blood cells and signal-sending proteins coursing through our veins, ready to mount an attack on would-be invaders. Everyone’s immune system is slightly different—a unique mixture of hundreds of these cells and proteins.

But the main driver of this variation is unclear. Although scientists know that our immune system can adapt to our environment—that’s why vaccines work, for instance—it is also built by our genes. To unravel the competing influences of nature and nurture, researchers led by immunologist Mark Davis of Stanford University in Palo Alto, California, turned to the gold standard test: a twin study. First New Antibiotic In 30 Years Could Prove Crucial In Fight Against Superbugs. Life Would Go On in Hot, Stinky World Without Microbes. What would happen if there were no microorganisms on the planet? 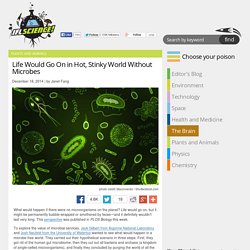 Life would go on, but it might be permanently bubble-wrapped or smothered by feces—and it definitely wouldn’t last very long. This perspective was published in PLOS Biology this week. To explore the value of microbial services, Jack Gilbert from Argonne National Laboratory and Josh Neufeld from the University of Waterloo wanted to see what would happen in a microbe-free world. 10 Deadliest Diseases in Human History. Superbugs and Antibiotics: Explore with a Dice Game - Science Buddies Blog. Stopping the course of an antibiotic early is one way that bacteria develop greater resistance to available medicines. 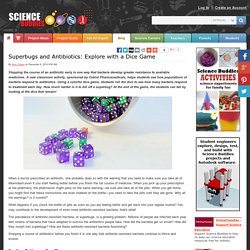 A new classroom activity, sponsored by Cubist Pharmaceuticals, helps students see how populations of bacteria respond to antibiotics. Using a colorful dice game, students roll the dice to see how many bacteria respond to treatment each day. How much harder is it to kill off a superbug? At the end of the game, the students can tell by looking at the dice that remain! When a doctor prescribes an antibiotic, she probably does so with the warning that you need to make sure you take all of it&emdash;even if you start feeling better before you finish the full course of medicine.