Assault Defense Lawyer Columbus Ohio, Assault Attorney Columbus. Traffic Violation Attorney Columbus Ohio - Traffic Ticket Lawyer Ohio. I drive a company carI have too many points on my licenseI have a commercial drivers license (CDL)I don’t want my insurance rates to increaseI drive for a livingI’ll lose my job if I lose my licenseI didn’t do anything wrong These are all great reasons to dispute your traffic citation. 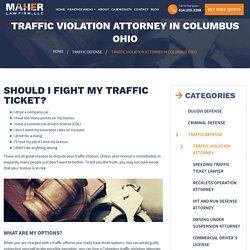 Unless your license is immediately in jeopardy, many people just don’t want to bother. To tell you the truth, you may not even know that your license is at risk. What are my options? When you are charged with a traffic offense you really have three options; You can plead guilty subjecting yourself to the possible penalties, you can hire a Columbus traffic violation attorney, or you can try to handle the case on your own. Should you choose The Maher Law Firm, attorney and owner Colin Maher will personally handle your traffic case. Speeding Tickets Speeding is one of the most common traffic violations we see here in Central Ohio. 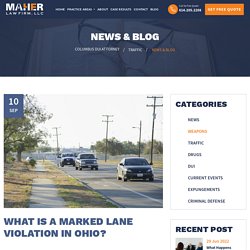 First, a driver can be ticketed for making an unsafe lane change. The state statute requires a person to wait to change lanes until after he or she “has first ascertained that such movement can be made with safety.” In real-world terms, this means a police officer or state trooper can make a stop and issue a ticket for cutting off another vehicle. Cruising in the center turn lane of two-way street or highway that is three lanes across is the second marked lane violation spelled out in Ohio state law. Traffic Violation Attorney Columbus Ohio - Traffic Ticket Lawyer Ohio. Simple Assault Charges in Ohio - Can You Go to Jail for Simple Assault.

Yes, you can go to jail for simple assault charges in Ohio. 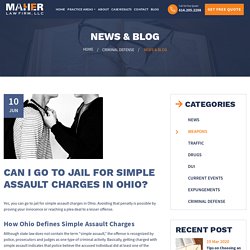 Avoiding that penalty is possible by proving your innocence or reaching a plea deal to a lesser offense. How Ohio Defines Simple Assault Charges Although state law does not contain the term “simple assault,” the offense is recognized by police, prosecutors and judges as one type of criminal activity. Basically, getting charged with simple assault indicates that police believe the accused individual did at least one of the following things: Knowing caused physical harm to another person,Intentionally and believably threatened to cause physical harm to another person,Recklessly injured someone, orBehaved so recklessly that someone else honestly believed he or she would suffer physical injuries.

Ohio law also recognizes the alleged offenses of negligent assault, felony assault, and aggravated. Traffic Violation Attorney Columbus Ohio - Traffic Ticket Lawyer Ohio. Why Ohio Suspend My Driver's License and What Consequences Be? The state of Ohio, working through municipal and county courts, the Bureau of Motor Vehicles, and law enforcement officers in the field have more than 20 ways to suspend a driver’s license. 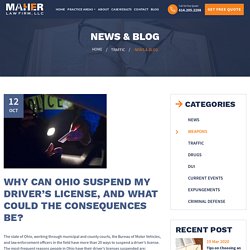 The most-frequent reasons people in Ohio have their driver’s licenses suspended are: Driving under the influence of drugs or alcohol, which state law calls operating a vehicle while intoxicated (OVI)Refusing to voluntarily participate in breath, blood, and urine testing while under suspicion of OVIReckless driving, which state law calls reckless operationCommitting a physical control violation, which involves being caught in the driver’s seat of a vehicle while holding the keys and being drunk or stonedDriving without current insurance coverageDriving while already under suspensionCommitting a range of commercial vehicle violations, including hauling an overweight load and not having up-to-date inspectionsOwing child support. 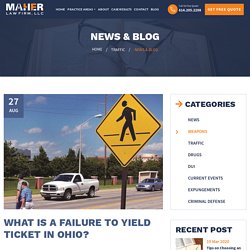 At least six statutes cover the alleged traffic violation. Fortunately, effective defenses exist to spare an improperly charged driver the costs of an Ohio failure to yield ticket. Traffic Laws That Define Failure to Yield Section 4511.43 of the Ohio Revised Code, which is titled “Right-of-way rule at through highways, stop signs, yield signs,” sets out the clearest definition of what constitutes a failure to yield.

Specifically, the statute requires drivers to “yield the right-of-way to any vehicle in the intersection or approaching on another roadway so closely as to constitute an immediate hazard during the time the driver is moving across or within the intersection or junction of roadways.” In other, words: Wait for a large break in traffic before entering an intersection. Ticketable offenses under this group of state laws include. What Are the Implications of a Speeding Ticket in Ohio - Maher Law Firm. How to Get a Stop Sign Ticket Dismissed Ohio - Stop Sign Ticket Cost. Colin Maher 2019-06-20 Traffic You must beat a stop sign ticket in court. 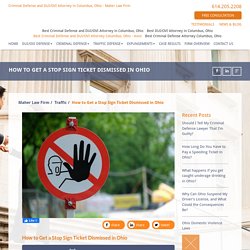 You cannot challenge a traffic ticket by mail or phone. The good news is that having the stop sign ticket dismissed and avoiding the penalties is possible. You must still answer for yourself whether taking a day off work and appearing before a judge is worth the time, expense, and effort. So let’s start there. What Are Some Reasons You Might Try to Get an Ohio Stop Sign Ticket Dismissed? A driver’s primary consideration is probably how much just signing and paying an Ohio stop sign ticket costs. First, the statutory penalty for a single stop sign violation during a 12-month period is a maximum fine of $150, administrative fees, and 2 penalty points on your license. Racking up three stop sign violations over the course of a year can bring a charge that gets prosecuted as a third-degree misdemeanor.

Certainly, trying to stay out of jail for repeated stop sign violations would merit fighting a ticket in court.