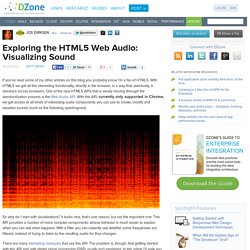 With HTML5 we get all this interesting functionality, directly in the browser, in a way that, eventually, is standard across browsers. One of the new HTML5 APIs that is slowly moving through the standardization process is the Web Audio API. With this API, currently only supported in Chrome, we get access to all kinds of interesting audio components you can use to create, modify and visualize sounds (such as the following spectrogram). So why do I start with visualizations? It looks nice, that's one reason, but not the important one. Getting Started with Web Audio API. Before the HTML5 <audio> element, Flash or another plugin was required to break the silence of the web. 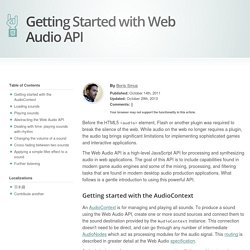 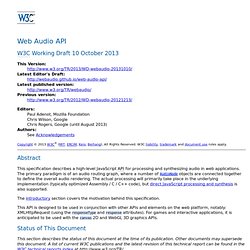 The primary paradigm is of an audio routing graph, where a number of AudioNode objects are connected together to define the overall audio rendering. Web audio: Filter Playground. Audio Data API. Defining an Enhanced API for Audio (Draft Recommendation) Note: this API has been deprecated in favor of the Web Audio API chosen by the W3C. 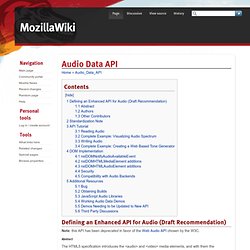 Abstract The HTML5 specification introduces the <audio> and <video> media elements, and with them the opportunity to dramatically change the way we integrate media on the web. The current HTML5 media API provides ways to play and get limited information about audio and video, but gives no way to programatically access or create such media. P/books/canvasdeepdive/chapter12.html. Overview So far I have shown you 2d drawing, animation, and hardware accelerated 3d. 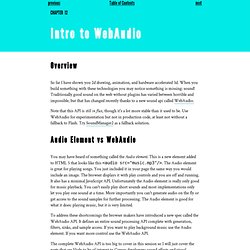 When you build something with these technologies you may notice something is missing: sound! Traditionally good sound on the web without plugins has varied between horrible and impossible, but that has changed recently thanks to a new sound api called WebAudio. Note that this API is still in flux, though it's a lot more stable than it used to be. Use WebAudio for experimentation but not in production code, at least not without a fallback to Flash. Bootstrap Magic : Generate simply your own bootstrap theme. Unfolding Maps: Unfolding is a library to create interactive maps and geovisualizations in Processing and Java.

AudioAPI - gears - Audio in the browser - Improving Your Web Browser. The purpose of this module is to provide an effective (and simple) Audio API through Gears. 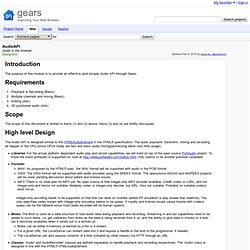 Playback & Recording (Basic) Multiple channels and mixing (Basic) Editing (Adv) 3D positioned audio (Adv) The scope of this document is limited to items (1) and (2) above. Items (3) and (4) are briefly discussed. The Audio API is designed similar to the HTMLAudioElement in the HTML5 specification. jRecorder – jQuery plugin for audio recording. Recently I made a jQuery plugin named jRecorder to record voice in html pages. 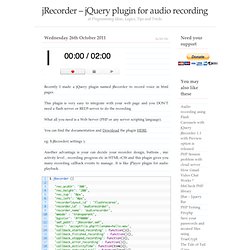 This plugin is very easy to integrate with your web page and you DON’T need a flash server or RED5 server to do the recording. JensNockert/aurora.js. Jussi-kalliokoski/sink.js. File API. Abstract This specification provides an API for representing file objects in web applications, as well as programmatically selecting them and accessing their data. 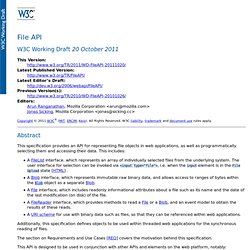 This includes: A FileList interface, which represents an array of individually selected files from the underlying system. The user interface for selection can be invoked via <input type="file">, i.e. when the input element is in the File Upload state [HTML] . A Blob interface, which represents immutable raw binary data, and allows access to ranges of bytes within the Blob object as a separate Blob. Additionally, this specification defines objects to be used within threaded web applications for the synchronous reading of files. 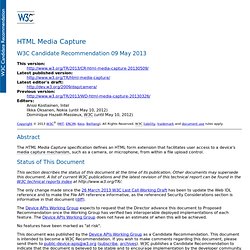 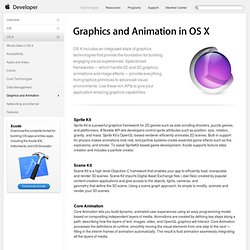 This task should be quite possible with modern GPUs. Each letter consists of two textured triangles, so we're only talking about two million triangles per frame. If you're coming from a traditional JavaScript animation background, this all sounds like madness. Edit this Fiddle. Sketch.js – A tiny boilerplate for creating JavaScript based coding experiments. Using JavaScript to Control the Audio Object. This section includes the following topics: Playing and pausing audio playback in JavaScript All other functionality of the audio player is controlled from JavaScript, as shown in the following script. Specifying audio files and managing playback in JavaScript In the next example, a text input element is added in the HTML portion where you can paste in the path of an MPEG-Layer 3 (MP3) audio file.

Catching errors. Web Audio API – Getting started. Recording html5 audio. HTML Speech Input API Specification. [XNA] Enregistrement audio. Aerotwist. Theming · senchalabs/jQTouch Wiki. Included Themes jQTouch ships with two themes by default, jqtouch.css and apple.css. While the themes are generally just CSS files you include, they are created using Sass and Compass — Ruby gems which precompile CSS, adding useful features like variables and functions. Additionally, the theming system is augmented with Compass Recipes, another open source project David Kaneda works on. Recipes includes a "layer effect"-like system, making advanced CSS styling super-easy. Installation If you're on a Mac, just run: sudo gem install compass And you'll have everything you need. If you are using the GitHub repo to stay up to date, you will also need the Compass Recipes submodule, which you can get by running git submodule init from the root jQTouch directory.

Kill Demo. Tutorials. First sketch. Real life demo - Buzz, a Javascript HTML5 Audio library. The Best jQuery Plugins for Twitter. Twitter can be one of the largest sources of traffic for many websites, and is a great way to grow and engage your audience. However, with the sheer number of users on Twitter, it can be hard to make an impression, and it’s also getting harder to connect with likeminded, active and engaging followers.