Dcrvault: RE-UPLOAD: David Bowie - Toy (Flac) Today the DB DVD bonanza has an extra cookie :) Thanks to ziggy for this gem, in Flac no less. extra cool cover! 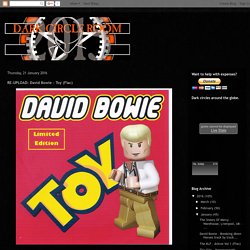 Original Info file: Originally, Bowie had recorded the album Toy for release in 2001 or 2002. This album was meant to feature some new songs and remakes of some his lesser-known songs from the 1960s. Toy remains officially unreleased. "Liza Jane" was Bowie's debut single, released under the name Davie Jones with the King Bees. "Uncle Floyd" (retitled "Slip Away") and "Afraid" were later released on Heathen, “Baby Loves That Way”, “Shadow Man”, and “You’ve Got A Habit of Leaving” were released as b-sides to Heathen's singles, and "Conversation Piece" was released on the Limited edition bonus disc of Heathen in 2002. 1. 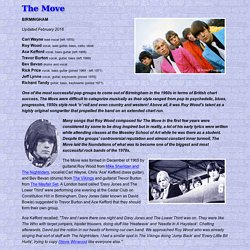 Above all, it was Roy Wood's talent as a highly original songwriter that propelled the band on an extended chart run. Ace Kefford recalled; "Trev and I were there one night and Davy Jones and The Lower Third was on. They were like The Who with target jumpers, hipster trousers, doing stuff like 'Heatwave' and 'Needle In A Haystack'. Singles: ‘Space Oddity’ to ‘Blackstar’: A timeline of David Bowie. 8th January 1947 - David Bowie is born David Robert Jones in Brixton, London, to mother Margaret “Peggy”, a waitress, and charity worker Haywood “John” Jones. 25th December 1959 - Bowie receives his first instrument for Christmas. 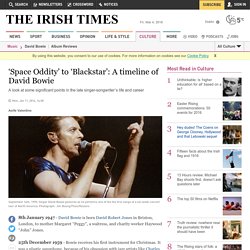 It was a plastic saxophone, because of his obsession with jazz artists like Charles Mingus and John Coltrane. 1966 - Performing initially as Davie Jones, or sometimes Davy Jones, Bowie finds himself being confused with Davy Jones of the Monkees. To avoid the confusion, he chooses “David Bowie” as his stage name, supposedly taking inspiration the famous Bowie knife. In Blackstar, David Bowie mentions "The Villa of Ormen" - the town of the serpent - This was one of only a handful of pictures posted to a site by that name in November. The rest of the pictures on the site fit perfectly with the lyrics... More inside. : "My father's live David Bowie pictures from 1976" by igacek in OldSchoolCool. David Bowie is...one of us. Zdjęcie 22-letniej Polki ma związek z wideoklipem Davida Bowie do utworu „Lazarus”? 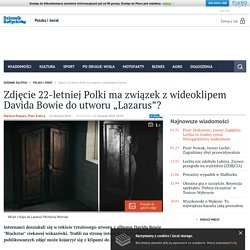 Dawn - Odd Nerdrum - WikiPaintings.org. The Fall To Earth: David Bowie, Cocaine And The Occult. For details of a free literary event including a reading from the book by Peter Doggett at Foyles on Charring Cross Road tonight, go to the end of the feature. The Unmaking of a Star #3: Cocaine and the Kabbalah I just wish Dave would get himself sorted fucking out. He’s totally confused, that lad... I just wish he could be in this room, right now, sat here, so I could kick some sense into him. In Blackstar, David Bowie mentions "The Villa of Ormen" - the town of the serpent - This was one of only a handful of pictures posted to a site by that name in November. The rest of the pictures on the site fit perfectly with the lyrics... More inside. :

I thought Lazarus was David Bowie’s latest guise… Critics are supposed to have perspective on their subject. 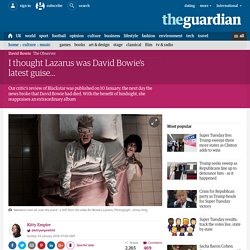 We are supposed to have some degree of insider knowledge. We have access to the industry machinery, at least in theory; sometimes access to the artists themselves. First episode of David Bowie’s Blackstar miniseries posted on Instagram. The first vignette from Instagram’s new miniseries Unbound, featuring music from David Bowie’s final album Blackstar, is as enigmatic as you’d expect from such a project. 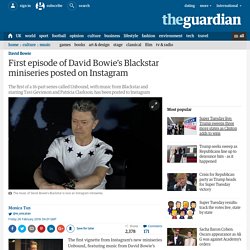 Before his death the British singer provided film-makers with unmediated access to the music and images from the album, with “no limits or preconditions”. The 15-second clip features a group of people sitting in a dimly lit library. One woman spins a globe with a glass of red wine in her hands, another distractedly works on a piece of embroidery. The others chat and share books, with the exception of a figure in the corner who looks on in silence and whose back faces the camera. The keen eyed will spot a book on the table bearing a large, black star on the cover in reference to Bowie’s 28th album. Within the first hour of posting, the clip collected more than 300 likes. David Bowie Morphing.

David Bowie's Yorkshire relatives share family snaps as they recall Davy Crockett hats and haircut disasters. David Bowie in a family picture with his mother Peggy and a boy believed to be his son Zowie He said: "I met him for lunch. 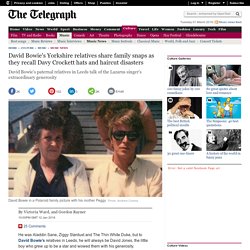 We spent about four hours together having a lunch and a chat with him. "The first time I met him I was surprised by how small he was [5ft 10in], I thought he'd be about six foot. He smoked a lot of Marlboro cigarettes, I remember that. "He was a perfect gentleman, an absolutely amazing guy, completely down to earth. "I really adored his music, I thought he was fantastic and I will miss him a lot. The Villa Of Ormen. The Villa Of Ormen. The final mysteries of David Bowie’s Blackstar – Elvis, Crowley and 'the villa of Ormen'

Nearly a fortnight after we were told “Look up here, I’m in heaven”, we’re still obsessing over David Bowie’s death. 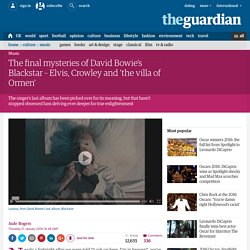 Pop detectives have been finding more cryptic clues about his demise from his last album, Blackstar, as well as discovering a tumblr that the man himself may have written. Here’s our handy, Illuminati-grade guide to the biggest work of death-art ever to hit the internet, to stop you swirling down a rabbit-hole of Bowie-sized proportions. 1 That album title Yes, it’s a name for a cancer lesion, although one usually associated with breast cancer, so its meaning in outer-space terminology is likely to have been far more significant for the Starman.

As well as being the name of a “hidden planet” that the apocalyptically inclined think will crash into the Earth (“Guys! Maybe Bowie was also winking at his good friend, Mos Def, who had a collective with the same name, plus Black Star is the name of a little-known Elvis song that has being doing the rounds. Bowie pills. The final mysteries of David Bowie’s Blackstar – Elvis, Crowley and 'the villa of Ormen' Here are all the lyrics to David Bowie's album, 'Blackstar' Blackstar via Vevo Bowie released the studio album “Blackstar” two days before he died of cancer. 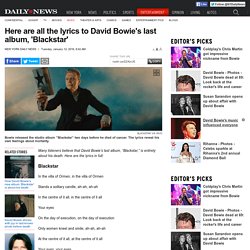 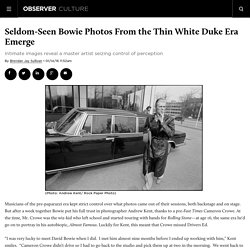 But after a week together Bowie put his full trust in photographer Andrew Kent, thanks to a pre-Fast Times Cameron Crowe. At the time, Mr. Crowe was the wiz-kid who left school and started touring with bands for Rolling Stone—at age 16, the same era he’d go on to portray in his autobiopic, Almost Famous. Luckily for Kent, this meant that Crowe missed Drivers Ed. David Bowie's close friend opens up about the star's bravery in his final days. David Bowie's close friend has opened up about the star's final months, revealing he chose to keep his illness private to protect his family. The music legend, 69, passed away last Sunday following an 18-month battle with cancer. His close friend, film and theatre producer Robert Fox, who worked with him on the musical Lazarus, described how he kept his illness private because he wanted "the minimum of fuss". Bowie's last public appearance was on December 12, at the opening night of Lazarus in New York.

Media Funhouse: “Knowledge comes with death’s release”: the “later” music videos of Deceased Artiste David Bowie (part 3 of three) If I was asked to pick my favorite post-’80 Bowie video, it would probably be “I'm Afraid of Americans” (1997, Dom and Nick). The song it visualizes is catchy as hell, and it’s socially significant without being preachy. Bowie loved living here in NYC in the two decades of his life, but he was right to be wary of the gun violence that consumes our society. Instead of writing a pro-gun control song, he came up with this (that phrase again) nightmare scenario. Of course the video is ripped right out of Taxi Driver, but since Scorsese has long since left that sort of gritty stylization behind (in favor of trying to refashion Leonard DiCaprio into a number of adult parts he isn’t quite versatile enough to excel in), so it’s all up for grabs. David Bowie's ex-girlfriend discusses their love affair, interracial dating, Mick Jagger, and the infamous Labyrinth bulge.

The singer Ava Cherry was sound asleep in her Lincoln Park home on the morning of January 11 when her phone began incessantly chiming and vibrating with alerts. Who's Facebooking me and texting me this much this early? She wondered. David Bowie - Five Years. Credit: Courtesy of © BBC Above: David Bowie interviewed at the Nationwide Rock and Pop Awards in 1981, where he picked up the award for best male singer.

Thursday, February 11, 2016 By Jennifer Robinson Photo Gallery. Seriously...David Bowie in his own words. David Bowie Hang On To Yourself documentary Pt 2. Peter Noone - Oh You Pretty Thing. Bowie: interview making life on mars. David Bowie: On Writing Flight of the Conchords’ ‘Bowie’s in Space’ Jemaine Clement on creating ‘Bowie’s in Space’, the Flight of the Conchords’ paean-parody to their musical hero. In 1999 Bret McKenzie and I were sitting with our guitars in our dingy flat in Wellington trying to learn David Bowie songs. They were catchy, which usually translates to being easy to play.

Performing Songwriter issue featuring David Bowie. Interviews with David Bowie, Phoebe Snow, Blues Traveler, North Mississippi Allstars, producing trio The Matrix, Some Girls, Josh Rouse, Leona Naess, Robert Cray, David Benoit and Peter Frampton. David Bowie's Handwritten Lyrics to "Ziggy Stardust" Stories Behind David Bowie's Songs. Over six decades on from his debut record (“Liza Jane” by his first group, The King Bees), David Bowie is arguably the most vital musician of his generation. Aside from his daring sonic explorations (in a little over the last decade alone, there was the drums ’n’ bass of Earthling and the innovative concept art of Outside), Bowie has diversified to pursue other interests (as far back as 1972 he said, “I’m not content to be a rock ’n’ roll star all my life”).

In recent years he’s been an Internet service provider and web host, journalist, wallpaper designer, photographer, painter, actor and one-man corporation (in 1997, he became the first pop star to offer himself as a share issue, with “Bowie Bonds”). Stories Behind David Bowie's Songs. David Bowie seduced his Beckenham landlady over tea and cannabis. The genteel commuter suburb of Beckenham in Kent may have been home to an eclectic group of people over the years — Bob Monkhouse, Julie Andrews, actor Simon Ward and boxer David Haye, to name a few. But it still seems an unlikely hotbed for searing creative talent and lashings of hot sex and drugs. FIRST LOOK: David Bowie in glamorous Louis Vuitton film L'Invitation au Voyage. David Bowie (Music) David Bowie - Blackstar.

David Bowie’s Religion and Political Views. David Bowie Asks Iman If They Should Just Do Lasagna Again. Marlene Dietrich & David Bowie "Just A Gigolo" David Bowie's Death and Occult Lazarus Resurrection. David Bowie - My Death 1995 (unreleased version) A night spent hanging out with David Bowie and Iggy Pop: Ivan Kral tells us what it was like.