The Devin Townsend Project - Epicloud (Full Album) 6 Books Everyone (Including Your English Teacher) Got Wrong. #3. 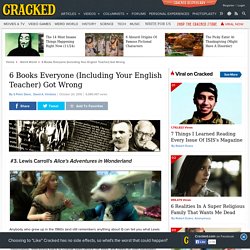 Lewis Carroll's Alice's Adventures in Wonderland Anybody who grew up in the 1960s (and still remembers anything about it) can tell you what Lewis Carroll's classic children's book was really all about: A girl takes a "trip" down the rabbit hole and finds herself in a surreal world where animals start talking to her. After she eats some "mushrooms," everything starts to change sizes before her eyes. She meets an over-stimulated "white rabbit" and a stoned caterpillar smoking a "shitload of drugs.

" We didn't really need Jefferson Airplane to clarify it; Alice in Wonderland is the Fear and Loathing of fairy tales. What it's really about: Lewis Carroll was the pen name of the very conservative Reverend Charles Lutwidge Dodgson, Anglican deacon and professor of mathematics. All the weird drug-trippy stuff that's been misinterpreted since Woodstock is, we're sorry to say, really just an elaborate satire of modern mathematics. Dodgson to new mathematics: "Get the hell off my lawn. " #2. . #1. Stanford Encyclopedia of Philosophy. Kostas Kiriakakis. Ian Hacking. Ian Hacking, CC, FRSC, FBA (born February 18, 1936) is a Canadian philosopher, specializing in the philosophy of science. 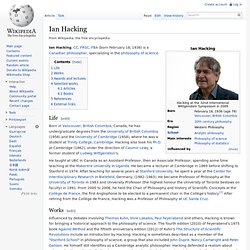 Life[edit] Born in Vancouver, British Columbia, Canada, he has undergraduate degrees from the University of British Columbia (1956) and the University of Cambridge (1958), where he was a student at Trinity College, Cambridge. Hacking also took his Ph.D. at Cambridge (1962), under the direction of Casimir Lewy, a former student of Ludwig Wittgenstein's. He taught at UBC in Canada as an Assistant Professor, then an Associate Professor, spending some time teaching at the Makerere University in Uganda. He became a lecturer at Cambridge in 1969 before shifting to Stanford in 1974. 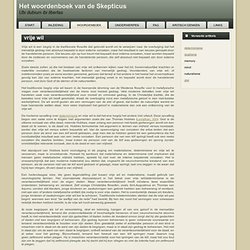 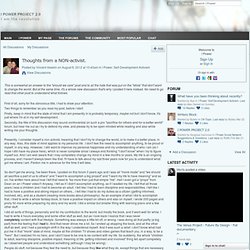 But at the same time, it's a whole new discussion that's why I posted it here instead. No need to go read that other post to understand what follows. First of all, sorry for the obnoxious title, I had to draw your attention. Two things to remember as you read my post, before I start: Firstly, keep in mind that the state of mind that I am presently in is probably temporary, maybe not but I don't know, it's just where I'm at in my self development. Secondly, the title of this discussion may sound controversial on such a pro "sacrifice-for-others-and-for-a-better-world" forum, but hear me out as I try to defend my view, and please try to be open-minded while reading and also while writing me your thoughts.

Presently, I consider myself a non-activist, meaning that I don't try to change the world, or to make it a better place, in any way. P.S. Thebigview.com - Pondering the Big Questions - StumbleUpon.