Is inequality bad for the environment? 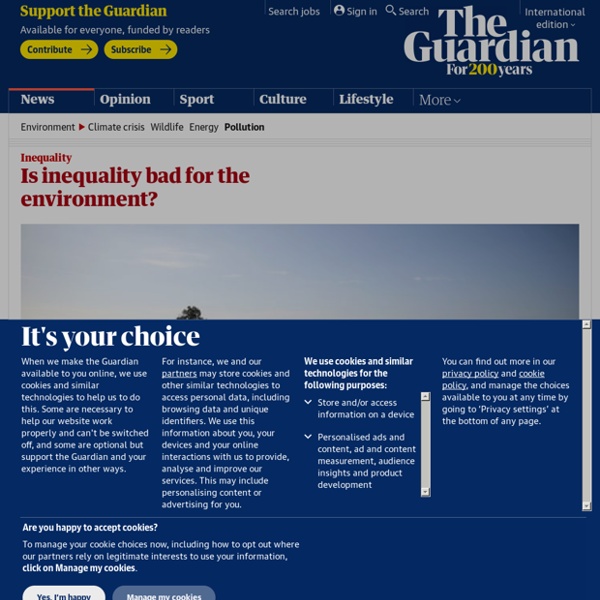 That equality matters in terms of health and happiness has been clear for some years. But it is also better for the environment. The evidence (which is still emerging) suggests the most unequal affluent countries contribute more to climate change via pollution than their more equal counterparts. A large section of their people may suffer more, too. A new report predicts the United States will see its levels of economic inequality increase due to the uneven geographical effects of climate change – resulting in “the largest transfer of wealth from the poor to the rich in the country’s history”, according the study’s lead author. In a 2016 report, Oxfam found that the greatest polluters of all were the most affluent 10% of US households: each emitted, on average, 50 tonnes of CO2 per household member per year. In short, people in more equal rich countries consume less, produce less waste and emit less carbon, on average. Consumption and waste Eating meat Water Carbon dioxide Transport Air travel

Tobacco control, a ‘major component’ of environmental protection efforts – UN health official The World Health Organization Framework Convention on Tobacco Control (WHO FCTC), which is celebrating the 15th anniversary of it being adopted this year – is a global health treaty that advocates for the control of tobacco production, sale and use, as a way of reducing tobacco-related illnesses, deaths, environmental degradation and poverty across the world. “People often immediately think of the health impact that tobacco has, but there is not enough awareness of how tremendously destructive it is for the environment too, on land, under water and in the air,” said Dr. Vera Luiza da Costa e Silva, the Head of the WHO FCTC Secretariat. “Studies indicate that tobacco growing could be up to 10 times more aggressive than all other deforestation factors,” Dr. da Costa e Silva noted.

The destruction of the Earth is a crime. It should be prosecuted Why do we wait until someone has passed away before we honour them? I believe we should overcome our embarrassment, and say it while they are with us. In this spirit, I want to tell you about the world-changing work of Polly Higgins. She is a barrister who has devoted her life to creating an international crime of ecocide. This means serious damage to, or destruction of, the natural world and the Earth’s systems. It would make the people who commission it – such as chief executives and government ministers – criminally liable for the harm they do to others, while creating a legal duty of care for life on Earth.

Cost of cigarettes must rise to reflect environmental damage from tobacco industry, WHO says The price of a packet of cigarettes should rise to reflect the wide-ranging environmental damage caused by the tobacco industry, from deforestation to water pollution, a major report has recommended. Backed by the World Health Organisation (WHO), the study found the industry’s carbon footprint was comparable to entire countries. Tobacco farms accounted for the loss of around 5 per cent of forests in parts of Asia and Africa, it stated. The UK was among the countries singled out for criticism along with several other western nations which were condemned for “literally burning poorer countries’ resources”. Cigarette production and consumption have seen dramatic growth in recent decades with around six trillion cigarettes manufactured annually for an estimated one billion smokers. Tobacco production is often more environmentally damaging than that of essential commodities such as food crops, the study by the WHO Framework Convention on Tobacco Control found.

1.9 billion people at risk from mountain water shortages, study shows A quarter of the world’s population are at risk of water supply problems as mountain glaciers, snow-packs and alpine lakes are run down by global heating and rising demand, according to an international study. The first inventory of high-altitude sources finds the Indus is the most important and vulnerable “water tower” due to run-off from the Karakoram, Hindu Kush, Ladakh, and Himalayan mountain ranges, which flow downstream to a densely populated and intensively irrigated basin in Pakistan, India, China and Afghanistan. The authors warn this vast water tower – a term they use to describe the role of water storage and supply that mountain ranges play to sustain environmental and human water demands downstream – is unlikely to sustain growing pressure by the middle of the century when temperatures are projected to rise by 1.9C (35.4F), rainfall to increase by less than 2%, but the population to grow by 50% and generate eight times more GDP.

Aside from Damaging Our Health, Smoking Also Harms the Environment The tobacco industry’s carbon footprint is greater than that of entire countries, such as Israel or Peru. Tobacco’s disastrous effects on human health have been clear for decades, despite industry giants trying to hide the evidence linking cigarette smoke and disease for as long as possible. Despite Big Tobacco’s machinations, countless public awareness campaigns have exposed the drug’s role in causing lung cancer and numerous other serious conditions.

Hard living: what does concrete do to our bodies? Michael has worked with concrete for 27 years. His job involves “breaking out” walls and floors, mixing concrete, injection work and drilling. These days, he suffers from chronic breathlessness, has had a cough for around three years and struggles to walk long distances. It is suspected that an emphysema-like condition called silicosis is to blame. Thanks to early-onset arthritis, he’s had both knees replaced.

Renewables 2019 Market analysis and forecast from 2019 to 2024 "Renewables are already the world's second largest source of electricity, but their deployment still needs to accelerate if we are to achieve long-term climate, air quality and energy access goals" Dr Fatih Birol, Executive Director, IEA Renewables 2019 is the IEA market analysis and forecast from 2019 to 2024 on renewable energy and technologies. It provides global trends and developments for renewable energy in the electricity, heat and transport sectors. 'We're wholly disappointed': the industry responds to Guardian concrete week This week Guardian Cities is investigating the impact of concrete, revealing the terrible destruction it causes to the planet: • Concrete is responsible for up to 8% of the world’s emissions of carbon dioxide, more than any material after fossil fuels. • Concrete in cities exacerbates flooding that kills thousands of people every year. • Its dust can be toxic. • It uses a tremendous amount of fresh water, roughly 10% of the global supply, often in communities where water for irrigation is in short supply. • It contributes to the heat island effect, raising temperatures in some already dangerously hot cities.

Recycling of Polyvinyl Chloride Polyvinyl chloride is one of the most widely used plastics worldwide. A major problem in the recycling of polyvinyl chloride is the high chlorine content in raw PVC and high levels of hazardous additives added to the polymer to achieve the desired material quality. As a result, PVC requires separation from other plastics before mechanical recycling.