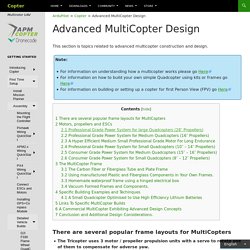 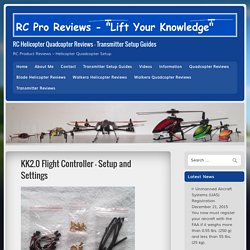 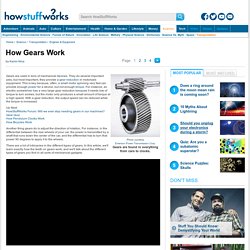 They do several important jobs, but most important, they provide a gear reduction in motorized equipment. This is key because, often, a small motor spinning very fast can provide enough power for a device, but not enough torque. For instance, an electric screwdriver has a very large gear reduction because it needs lots of torque to turn screws, bu­t the motor only produces a small amount of torque at a high speed. With a gear reduction, the output speed can be reduced while the torque is increased. ­ Another thing gears do is adjust the direction of rotation. A Hydraulic System. The basic idea behind any hydraulic system is very simple: Force that is applied at one point is transmitted to another point using an incompressible fluid. 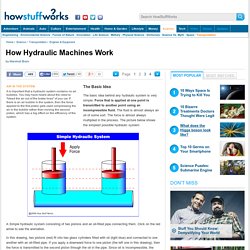 The fluid is almost always an oil of some sort. The force is almost always multiplied in the process. The picture below shows the simplest possible hydraulic system: How to make Solenoid Engine (Tutorial) How a Car Engine Works - Animagraffs. Seattle Robotics Society Encoder. Recently many kind of robot contests have being opened and some interesting reports of the challenge are found on the web. 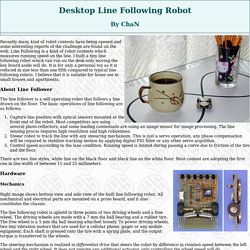 Line Following is a kind of robot contests which measures running speed on the line. I built a tiny line following robot which can run on the desk-only moving the key board aside will do. Arc Welding Lessons. Mechanisms & automata. Understanding the Quantum delusions. To put in simple words, classical mechanics is the physics of the macroscopic world AND quantum mechanics is the physics of the microscopic subatomic world, otherwise called as the quantum world. 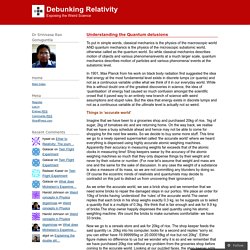 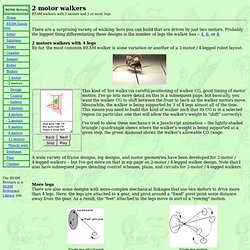 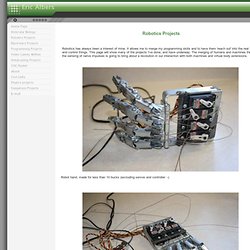 How to Build a Robot Tutorials - Society of Robots. This is where brazing excels. 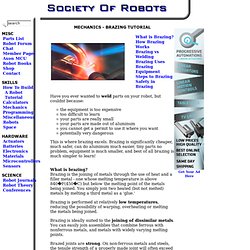 Brazing is significantly cheaper, much safer, can do aluminum much easier, tiny parts no problem, equipment is much smaller, and best of all brazing is much simpler to learn! Step 4 - Brazing The actual brazing step is probably the easiest and quickest of the steps. If you are a novice, dont worry it is really easy, almost self-explanatory. Simply heat the joint between the two metals that you wish to join until just before they start to glow red (or until the flux becomes clear).

Robotics Activities - Build Your Own Robot Arm. Component Addition. Earlier in this lesson, we learned that vectors oriented at right angles to one another can be added together using the Pythagorean theorem. 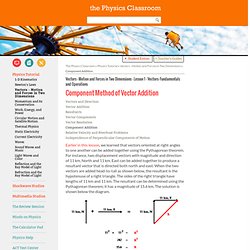 For instance, two displacement vectors with magnitude and direction of 11 km, North and 11 km, East can be added together to produce a resultant vector that is directed both north and east. When the two vectors are added head-to-tail as shown below, the resultant is the hypotenuse of a right triangle. Micromouse : Maze solving algorithm. This is my maze solving robot project which worked out pretty well. Land Crawler eXtreme Locomotion Demo Video.

Robotics. Robotics is the branch of mechanical engineering, electrical engineering and computer science that deals with the design, construction, operation, and application of robots,[1] as well as computer systems for their control, sensory feedback, and information processing. These technologies deal with automated machines that can take the place of humans in dangerous environments or manufacturing processes, or resemble humans in appearance, behavior, and/or cognition. Many of today's robots are inspired by nature contributing to the field of bio-inspired robotics. The concept of creating machines that can operate autonomously dates back to classical times, but research into the functionality and potential uses of robots did not grow substantially until the 20th century.[2] Throughout history, robotics has been often seen to mimic human behavior, and often manage tasks in a similar fashion.

The latest specimen comes from South Korea and is called Cheetaroid. Now, you may be asking why we need quadruped robots and, in particular, cat-inspired ones. The creators of the Cheetaroid, a team from Sogang University's Robotic Systems Control Laboratory, led by Professor Kyoungchul Kong, are envisioning different applications. They illustrate those in the image below, which shows how Cheetaroid could be used to assist firefighters, soldiers, disabled individuals, and—well, we're not exactly sure what's going on in the lower right image but we wouldn't want to be the guy in the bite suit. Lately, most quadruped projects have focused on building faster and more efficient robots. Robots:scarleth – Legged Robotics. ScarlETH (Series Compliant Robotic Leg) was developed at our Lab for fast, efficient, and versatile locomotion.