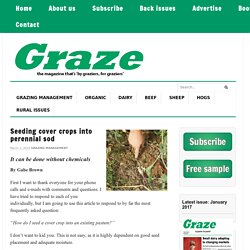 I have tried to respond to each of you individually, but I am going to use this article to respond to by far the most frequently asked question: “How do I seed a cover crop into an existing pasture?” I don’t want to kid you. This is not easy, as it is highly dependent on good seed placement and adequate moisture. Let us consider a scenario for seeding into a cool season, tame-grass pasture with some legume diversity, as this is the most common situation.

Think of it this way: If you leave a cropland field go unattended, what happens? Many of you will be interested in seeding a cover crop to spring pastures. Let’s look at a scenario for seeding a cover crop after the spring growth flush for perennial cool season forages. By this time you should be past the peak growing season for the cool season species. Good seed-to-soil contact is critical. Next, have the correct species in the mix. Gabe Brown ACRES USA interview Cover Cropping. Soil Fungal:Bacterial Ratios Are Linked to Altered Carbon Cycling. Carbon Link. Issue Preview: Cutting the Cost of Hay. Wintering beef cows was once “pretty traditional” on Jerry Doan’s Black Leg Ranch near McKenzie, North Dakota. 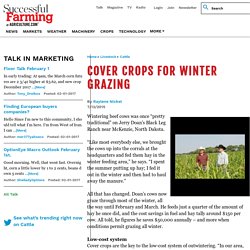 “Like most everybody else, we brought the cows up into the corrals at the headquarters and fed them hay in the winter feeding area,” he says. “I spent the summer putting up hay; I fed it out in the winter and then had to haul away the manure.” All that has changed. Doan’s cows now graze through most of the winter, all the way until February and March. He feeds just a quarter of the amount of hay he once did, and the cost savings in fuel and hay tally around $150 per cow. Low-cost systemCover crops are the key to the low-cost system of outwintering.

8. How do farmers make it happen, and what are the risks? 2. What is a Soil Carbon Project Worth? 7. What are the steps to a soil carbon project. 4. The Microbes Role in Soil Carbon Sequestration. 6. The BEAM Approach. 5. The Johnson-Su Composting Bioreactor. 6253 Johnson Quivira. Single- and two-species tests to study effects of the anthelmintics ivermectin and morantel and the coccidiostatic monensin on soil invertebrates - Jensen - 2009 - Environmental Toxicology and Chemistry. Soil invertebrates in arable land are potentially exposed to veterinary medicines excreted by husbandry. 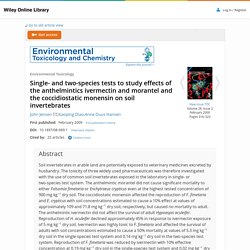 The toxicity of three widely used pharmaceuticals was therefore investigated with the use of common soil invertebrates exposed in the laboratory in single- or two-species test system. The anthelmintic morantel did not cause significant mortality to either Folsomia fimetaria or Enchytraeus crypticus even at the highest tested concentration of 900 mg kg−1 dry soil. The coccidiostatic monensin affected the reproduction of F. fimetaria and E. crypticus with soil concentrations estimated to cause a 10% effect at values of approximately 109 and 71.8 mg kg−1 dry soil, respectively, but caused no mortality to adult. Endoparasite control strategies: Implications for biodiversity of native fauna. Environmental assessment of veterinary avermectins in temperate pastoral ecosystems - WRATTEN - 1996 - Annals of Applied Biology. Endectocide use in cattle and fecal residues: environmental effects in Canada. The Soil Carbon Challenge. 1. 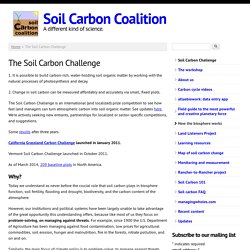 It is possible to build carbon-rich, water-holding soil organic matter by working with the natural processes of photosynthesis and decay. 2. Change in soil carbon can be measured affordably and accurately via small, fixed plots. Compost Myths: To Turn Or Not To Turn, That Is The Question. From The Humanure Handbook by Joseph Jenkins What is one of the first things to come to mind when one thinks of compost? 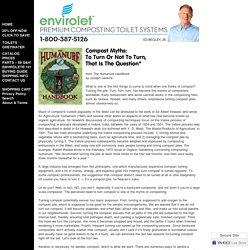 Turning the pile. Turn, turn, turn, has become the mantra of composters worldwide. Early researchers who wrote seminal works in the composting field, such as Gotaas, Rodale, and many others, emphasize turning compost piles, almost obsessively so. Much of compost's current popularity in the West can be attributed to the work of Sir Albert Howard, who wrote An Agricultural Testament (1943) and several other works on aspects of what has now become known as organic agriculture.

A large industry has emerged from this philosophy, one which manufactures expensive compost turning equipment, and a lot of money, energy, and expense goes into making sure compost is turned regularly. JONES MycorrhizalFungiEVERGREEN(Sept09) Nrcs142p2 050956. Soil Quality Test Kit. The Soil Quality Test Kit Guide describes procedures for 12 on-farm tests, an interpretive section for each test, data recording sheets, and a section on how to build your own kit. 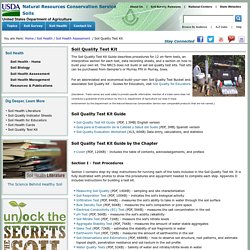