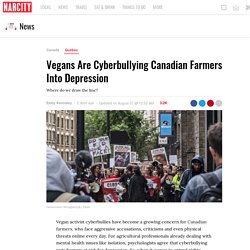 For agricultural professionals already dealing with mental health issues like isolation, psychologists agree that cyberbullying puts farmers at risk for depression. The Food 53: People whose environmentalism is central to their food choices. John Bil cares about the fate of the planet. 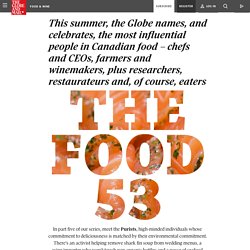 But he would like it very much if people stopped using the word "sustainable" to talk about seafood. "What are we trying to sustain? " asks Bil, the respected proprietor of Toronto's laid-back fish shop and restaurant, Honest Weight. 'It is actually free': Montreal man gives away heaps of farm-fresh veggies every week. When Michael Brodie first saw a man with a shaggy head of hair and beard giving away free organic vegetables down by Montreal's Lachine Canal last summer, he decided to pass. 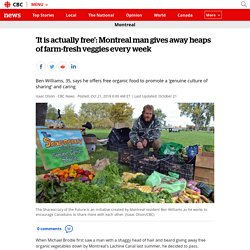 "He seemed very suspect to me, so I avoided it. " But that bearded man — 35-year-old Ben Williams — kept coming back, using a bike trailer to haul in hundreds of dollars worth of vegetables every week, laying out blankets covered in a colourful array of squashes, herbs, turnips, leeks, beets, leafy greens, bulbs of garlic, onions and potatoes. Sustainability Snapshot: The intersection between food supply and sustainability - Bullfrog Power. Avoiding meat and dairy is ‘single biggest way’ to reduce your impact on Earth. Avoiding meat and dairy products is the single biggest way to reduce your environmental impact on the planet, according to the scientists behind the most comprehensive analysis to date of the damage farming does to the planet. 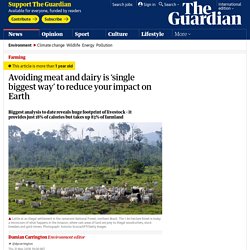 The new research shows that without meat and dairy consumption, global farmland use could be reduced by more than 75% – an area equivalent to the US, China, European Union and Australia combined – and still feed the world. Loss of wild areas to agriculture is the leading cause of the current mass extinction of wildlife. The new analysis shows that while meat and dairy provide just 18% of calories and 37% of protein, it uses the vast majority – 83% – of farmland and produces 60% of agriculture’s greenhouse gas emissions. What We Heard Report – The Proposed Safe Food for Canadians Regulations Consultation. Substituting Beans for Beef Would Help the U.S. Meet Climate Goals - The Atlantic. Ecoanxiety is an emerging condition. 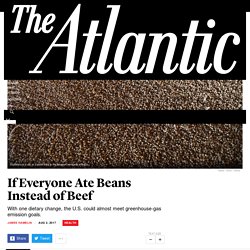 Named in 2011, the American Psychological Association recently described it as the dread and helplessness that come with “watching the slow and seemingly irrevocable impacts of climate change unfold, and worrying about the future for oneself, children, and later generations.” It’s not a formal diagnosis. Anxiety is traditionally defined by an outsized stress response to a given stimulus. A taste of what’s to come: Inside the big revamp of Canada’s Food Guide - The Globe and Mail. 10 mega myths about farming to remember on your next grocery run. Most of us don’t spend our days plowing fields or wrangling cattle. 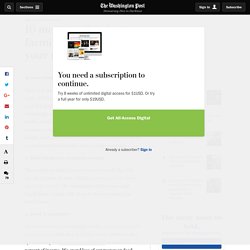 We’re part of the 99 percent of Americans who eat food, but don’t produce it. 27 year-old who hasn’t woken up before 9:30am in 8 years thinks he could run farm if society crumbles - The Beaverton. VANCOUVER – Despite never waking up with the sunrise in his entire life, local 27 year-old Jamie Pasternak believes that he could own and operate a farm if Canadian society ever collapsed into some sort of primitive anarchy. 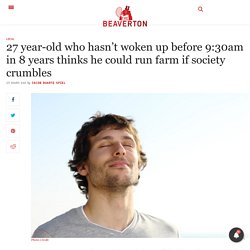 “I’ve always had a green thumb. When we had to grow beansprouts in grade 4 mine was the biggest,” said Pasternak, who has never shown interest in learning crop rotation, making his own fertilizer, or pickling fruits and vegetables. “I haven’t really had to grow anything since then, but I’ve probably still got the knack.” Pasternak says he’d also probably be able to tame and yoke beasts of burden, like horses and oxen, even though he knows nothing about breeding, birthing, or milking animals and has never once heard the word “geld” let alone performed the procedure. “Yup. Earthseed Detroit: Taraxacum Officinale - The Teeth of A Revolution. Spring is upon us and many leaves of green have finally emerged. 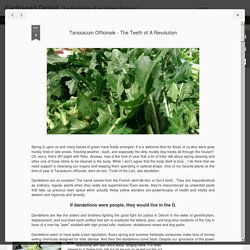 It is a welcome time for those of us who were quite frankly tired of late snows, freezing weather, slush, and especially the dirty muddy dog tracks all through the house!!! Oh, sorry, that's MY plight with Riley. Anyway, now is the time of year that a lot of folks talk about spring cleaning and often one of those items to be cleaned is the body. While I don't agree that the body itself is toxic , I do think that we need support in cleansing our organs and keeping them operating in optimal shape. LEAR (agricultural lands) Review – Greenspace Alliance of Canada's Capital / Alliance pour les espaces verts de la capitale du Canada. May 12, 2015 Below and attached are some questions sent to Council in advance of its meeting of May 13, 2015. 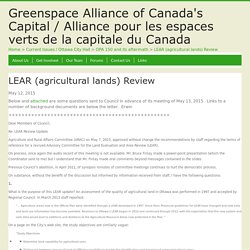 Links to a number of background documents are below the letter. Erwin Dear Members of Council, Judge dismisses case of woman who gave water to pigs headed to slaughter. A judge in Canada has dismissed a case against a Toronto activist who gave water to pigs heading to the slaughter on a hot day, bringing an end to a two-year case that had become a rallying point for animal rights campaigners around the world. 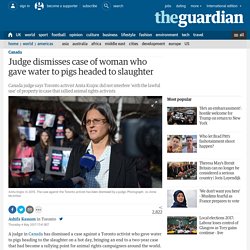 The largest bulk food retailer in the country has just announced that it will accept reusable containers in all stores, starting February 24, 2017. This is a monumental victory for the Zero Waste movement in Canada, since Bulk Barn has 260 locations across the nation, many of which are in small communities without access to other zero waste-friendly stores. TreeHugger spoke with Jason Ofield, executive vice-president of the company, to learn more about this wonderful development. The Matter of Meat: A history of pros and cons - Home. To learn more click on a 'cut' What Do Tomatoes Have in Common with Cats? Plant a seed and watch it grow: Incubating farmers. Like this column? I Tried Eating All My Meals With Edible Spoons, And It Was Devastating. The revolution will not be market gardenized: some thoughts on Jean-Martin Fortier. Health Risks That Large Factory Farming Leaves Behind. How Americans pretend to love ‘ethnic food’

The 68th UN General Assembly declared 2015 the International Year of Soils. Here at HMI, we think we should celebrate healthy soil every year — and every day–because we know that building and maintaining healthy soil is essential to environmentally conscious land management and sustainable agricultural practices. And there is no better practice for soil health than the Holistic Management Whole Farm/Ranch planning system. Our entire framework focuses on creating healthier soil through all the decisions and planning processes practitioners go through. Holistic Management has helped thousands of farmers, ranchers and land stewards around the world to create more healthy soil which provides many benefits including: improved water infiltration, carbon sequestration, and wildlife habitat. Dr. Videos The First Millimeter: Healing the Earth Holistic Management and Carbon Sequestration Holistic Management Regenerates Grasslands Understanding The Soil Surface Sequestering Carbon in Agricultural Soils.

We need regenerative farming, not geoengineering. Why You Should Always Buy the Bigger Vegetables at the Farmer's Market. 101 Facts That Should Make You Hopeful About the Future of Food. World agriculture: towards 2015/2030.