Many Ways to Tell a Story: How Transmedia Is Transforming Education In and Out of Classrooms. For one language arts class project, a middle school teacher in Shelburne, Virginia, Chad Sansing, asks his sixth graders to read Peter Cherches’s 1986 poem “Lift Your Right Arm,” and then translate it into computer code. 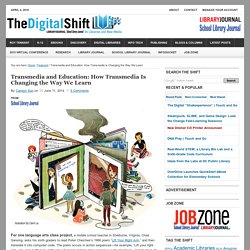 The poem occurs in action sequences—for example, “Lift your right arm, she said. /I lifted my right arm.” Sansing and his class conceive a list of actions, sketch ideas of how to code them, using icons or letters, and then code the poem. In doing so, the students become producers of both a new language and way of seeing poetry. Sansing’s students have also translated the poem’s code into Scratch, to create animation, and into LEGO Mindstorms EV3, a robot-programming language. What is the point of this activity? Transmedia, a broad descriptive word that literally translated means “across media” and encompasses many strategies that transverse industries, is generally regarded as the use of multiple media platforms to tell a story or story experience.

21st-Century Libraries: The Learning Commons. Libraries have existed since approximately 2600 BCE as an archive of recorded knowledge. 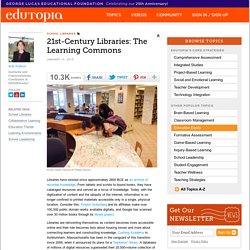 From tablets and scrolls to bound books, they have cataloged resources and served as a locus of knowledge. Today, with the digitization of content and the ubiquity of the internet, information is no longer confined to printed materials accessible only in a single, physical location. Consider this: Project Gutenberg and its affiliates make over 100,000 public domain works available digitally, and Google has scanned over 30 million books through its library project. Libraries are reinventing themselves as content becomes more accessible online and their role becomes less about housing tomes and more about connecting learners and constructing knowledge.

Cushing Academy in Ashburnham, Massachusetts has been in the vanguard of this transition since 2009, when it announced its plans for a "bookless" library. From Library to Learning Commons Photo credit: Francis W. Transparent Learning Hubs. Catalog your books online. E-Newsletter ~ Information and Library Services ~ Regina Catholic Schools. 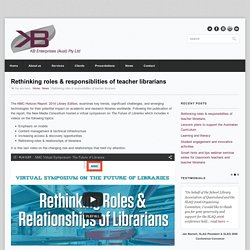 Following the publication of the report, the New Media Consortium hosted a virtual symposium on The Future of Libraries which includes 4 videos on the following topics: Emphasis on mobileContent management & technical infrastructureIncreasing access & discovery opportunitiesRethinking roles & relationships of librarians It is this last video on the changing role and relationships that held my attention. Even though the focus is on academic libraries in higher education the content does highlight similar issues that are common to school libraries. Here are some key points to ponder: The Library Of The Future Will Probably Look Something Like This. The Library Voice. Golden Eagle Library Book Blog: Value Added Hashtags? This year, I have dabbled in using social media to promote the library program. 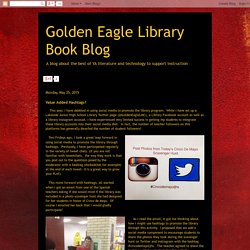 While I have set up a Lakeside Junior High School Library Twitter page (@GoldenEagleLMC), a Library Facebook account as well as a library Instagram account, I have experienced very limited success in getting my students to integrate these library accounts into their social media diet. In fact, the number of teacher followers on this platforms has generally dwarfed the number of student followers! Two Fridays ago, I took a great leap forward in using social media to promote the library through hashtags.

Previously, I have participated regularly in the variety of tweet chats. (If you are not familiar with tweetchats, the way they work is that you post out to the questions posed by the moderator with a hashtag (#arkedchat for example) at the end of each tweet- it is a great way to grow your PLN!) As I read the email, it got me thinking about how I might use hashtags to promote the library through this activity. Global TL: Librarians without borders – Communauté – Google+ School Libraries Matter: The Changing Role of the School Librarian.

Eclectech Librarian. Why Librarians Are Awesome #TLChat. Librarian Media Coordinator Teacher-Librarian Superman Whatever you call them, those folks who work in our libraries and media centers are amazing. 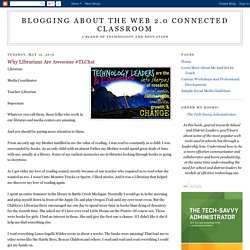 And you should be paying more attention to them. From an early age my Mother instilled in me the value of reading. As I got older my love of reading waned, mostly because of one teacher who required us to read what she wanted us too. I spent an entire Summer in the library in Battle Creek Michigan. I read everything Laura Ingalls Wilder wrote in about 2 weeks. I spent so much time in that library reading and helping out I got the 1990 Patron of the Year Award and a Gold Library card to go with it! Librarians in our schools are under constant threat. Being in the library is more than just checking out books. But it's more than that. And look at what is happening in Libraries across the globe. So whatever you call yours I hope you take the time to thank them for the work they do and remind them just how awesome they are! The Library Voice. Catalog your books online.