ELA A9 - The First Stone

Can prison be a place of redemption? In 1991, Shaka Senghor shot and killed a man. 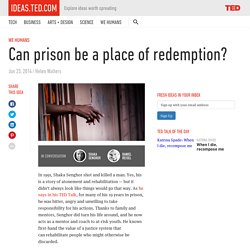 Yes, his is a story of atonement and rehabilitation — but it didn’t always look like things would go that way. As he says in his TED Talk, for many of his 19 years in prison, he was bitter, angry and unwilling to take responsibility for his actions. Thanks to family and mentors, Senghor did turn his life around, and he now acts as a mentor and coach to at-risk youth. He knows first-hand the value of a justice system that can rehabilitate people who might otherwise be discarded. In this long, thoughtful conversation, Senghor talks to Daniel Reisel, a London-based doctor who studies the neuroscience of restorative justice — including the treatment of criminal psychopaths, often considered impossible to rehabilitate.

Shaka Senghor: Dan, according to your research, what percentage of people in the prison system are actually identified as psychopaths? Daniel Reisel: Ah! DR: I find that terrifically interesting. DR: It’s such a typical situation. A brave and selfless act. A man originally from Sudbury will be presented Wednesday with the Governor General's Certificate of Commendation for a brave and selfless act that saved the life of his sister, his future wife, two friends and himself. 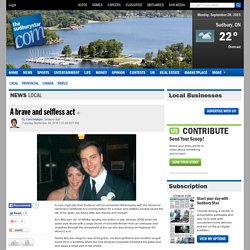 Eric McLean, 30, of Whitby, sprang into action in late January 2006 when his sister was struck with a large chunk of concrete thrown from an overpass and smashed through the windshield of the car she was driving on Highway 401 about 2 a.m. Nadia McLean-Gagnon was driving Eric, his then-girlfriend and another couple home from a wedding when the one-kilogram projectile smashed the glass and tore away a large part of her cheek. Eric, who was riding in the back seat of the vehicle that was travelling about 100 km/h, grabbed the steering wheel and managed to stop the car using the hand brake. Carole McLean, Eric and Nadia's mother, shudders to this day when she thinks of how her two children, a future daughter-in-law and two others could have been killed in the incident. Survivor remembers near fatal concrete attack from Oshawa bridge. WHITBY -- A lot has happened in the four years since Nadia McLean-Gagnon saw her life turned upside down by what one police officer referred to as an "intentional, cruel criminal act," but the 32 year old is still smiling. 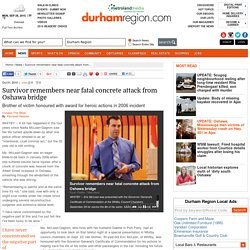 Ms. McLean-Gagnon was an eager bride-to-be back in January 2006 when she suffered severe facial injuries after a chunk of concrete was heaved from the Albert Street overpass in Oshawa, smashing through the windshield of the vehicle she was driving. "Remembering is painful and at the same time it's not," she said, now with only a slight scar visible under her cheek since undergoing several reconstructive surgeries and extensive dental work. "I have never concentrated on the negative part of this and I've just felt like I've been lucky to be alive.

" I have never concentrated on the negative part of Ms. "This is a very wonderful memento for you to keep to remember the wonderful thing that you did for your family," Mayor Pat Perkins told Mr. Young Offender Arrested In Rock Throwing Incident That Scarred Teacher's Face. They weren’t sure why it happened or who did it. 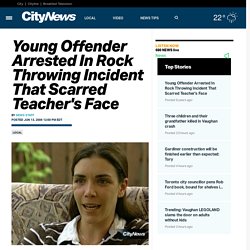 But police now have a suspect in a shocking incident that took place last January above the 401 in Oshawa. And he’s only 14 years old. The case became infamous across the G.T.A. Nadia McLean, a 28-year-old teacher, had just picked up her brother and three friends from a wedding and was driving them home at 2am when the unthinkable happened. Someone threw a two and a half pound rock from the Albert St. overpass and it smashed her windshield like a bullet, hitting the driver’s side and knocking her unconscious. The damage to her face was extensive and horrifying – including ripping off her right cheek.

Cops vowed to find the person who dropped the projectile and the investigation took months. McLean’s visage still bears the evidence of her near fatal encounter with the boulder. She admits she has mixed emotions to hear the person charged is someone so young. “Everybody keeps telling me, well, aren’t you angry? John 8-7. The Bible Series - John 8 Verse 7. Youth Criminal Justice Act - Principles. Conditional and Alternative Sentences - FASD & The Justice System. Some courts are imposing conditional or alternative sentences where the defence can make convincing submissions that focus on rehabilitative and supportive programming for the accused with FASD. 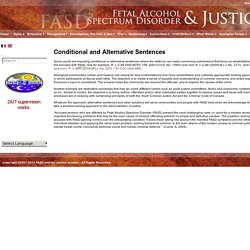 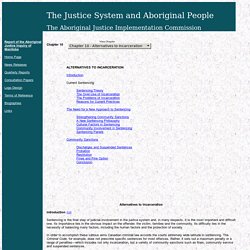