Tinder and Hookup-Culture Promotion. It’s a balmy night in Manhattan’s financial district, and at a sports bar called Stout, everyone is Tindering. 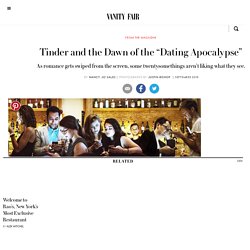 The tables are filled with young women and men who’ve been chasing money and deals on Wall Street all day, and now they’re out looking for hookups. Everyone is drinking, peering into their screens and swiping on the faces of strangers they may have sex with later that evening. Or not. “Ew, this guy has Dad bod,” a young woman says of a potential match, swiping left. Common sense should tell you that the more random people you sleep with, the higher your risk of contracting a sexually transmitted disease of some kind, especially if you don't know them so well and they are regularly using hookup apps like Grindr and Tinder. 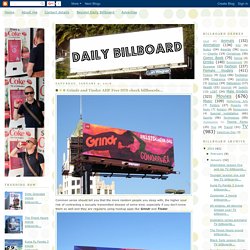 Through helping clients and from medical research, AIDS Healthcare Foundation understands this notion and created these 'Free STD Check' ad creatives to help educate, raise awareness and stop the unnecessary spread of STDs like gonorrhea and chlamydia and encourage safe sex practices, whatever your sexual preference. When it first debuted in September 2015, the clever outdoor ad campaign featuring silhouetted faces and the hookup brand names next to STDs garnered worldwide attention, the threat of legal action from Tinder and temporary advertising blacklisting by Grindr. Hopefully it also made an impression with those most susceptible, the 15 to 24-year-olds. Tinder demands removal of L.A. billboard that tells dating app users to get STD test. Tinder has sent a cease and desist letter to the AIDS Healthcare Foundation after a billboard went up in Los Angeles last week that draws a link between dating apps and a growing rate of sexually transmitted diseases. 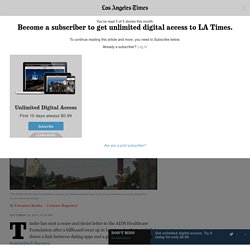 The foundation said the billboard's purpose is to raise awareness about the increasing STD rate and to encourage dating-app users to get regular screenings or a “free STD check.” The billboard features silhouettes of people and the words “Tinder, Chlamydia, Grindr, Gonorrhea.” “In many ways, location-based mobile dating apps are becoming a digital bathhouse for millennials wherein the next sexual encounter can literally just be a few feet away—as well as the next STD,” Whitney Engeran-Cordova, the foundation’s public health division director, said in a statement. But Tinder, a location-based dating app, has fired back, saying the ad wrongly associates the app with venereal disease. Tinder saves face.

The Health and Safety page ends a dispute that's been going on for months. 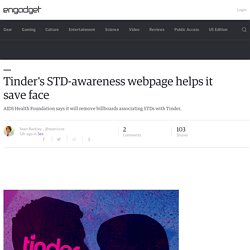 Late last year, the AHF launched an advertising campaign that featured silhouettes with Tinder and Grindr logos interacting with silhouettes labelled with sexually transmitted diseases. The awareness campaign urged app users to seek out free STD testing, but Tinder took exception to it, accusing the non-profit of "falsely associated Tinder with the contraction of venereal disease. " The AHF refused to take down billboards with the advertisement -- but just recently changed its tune. Now that Tinder is linking its users to the Healthvana STD testing locator, the AHF says it plans to remove billboards and advertisements associating Tinder with STDs. Tinder's public health page may have been envisioned as a form of damage control, but the company does have a history of promoting good health: in December, the company partnered with the UK's blood and transplant service to raise awareness for organ donation.

Tinder Adds STD Testing Locator to Its Website—Good Luck Finding It. The dating app Tinder (or hookup app, depending on whom you ask ) has added an HIV and sexually transmitted disease testing locator on its website—but good luck finding it. 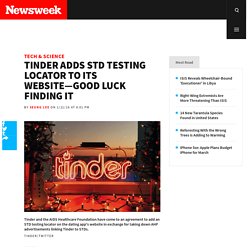 While Tinder’s move is laudable—as some STD rates in the United States hit an all-time high—the finished product is disappointing, despite considerable hoopla from Tinder, Healthvana and the AIDS Healthcare Foundation (AHF). First, the STD locator on Tinder is just a link that takes anyone interested to health startup Healthvana’s website. And to get to the link, you need to click on a tiny gray “health safety” button on the bottom right on the Tinder home page, then scroll down to the end of the health safety page to the link.

Try Newsweek for only $1.25 per week On the mobile app, where Tinder really happens, you needs to click on the settings button on the top left, then click “help & support,” transfer over to a Web browser, click on "health safety" and then scroll down to the STD locator link. Health Safety. Tinder empowers our users to create relationships. 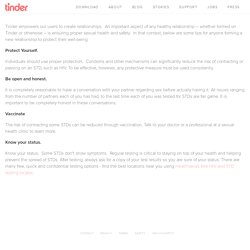 An important aspect of any healthy relationship – whether formed on Tinder or otherwise – is ensuring proper sexual health and safety. In that context, below are some tips for anyone forming a new relationship to protect their well-being. Protect Yourself. Individuals should use proper protection. Condoms and other mechanisms can significantly reduce the risk of contracting or passing on an STD, such as HIV. Be open and honest. It is completely reasonable to have a conversation with your partner regarding sex before actually having it.

Vaccinate The risk of contracting some STDs can be reduced through vaccination. Freestdcheck.