Teaching Writing While Standing on One Foot. Dr. T's virtual Rhetoric lyceum. The My Lai Massacre: and babies? ...... and babies. [from congressional testimony] Whoopi Goldberg duels with Disney. Whoopi Goldberg tore her black jeep from its space outside a Los Angeles rehearsal studio. 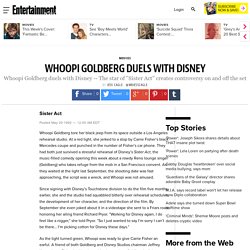 At a red light, she jerked to a stop by Carrie Fisher’s black Mercedes coupe and punched in the number of Fisher’s car phone. They had both just survived a stressful rehearsal of Disney’s Sister Act, the music-filled comedy opening this week about a rowdy Reno lounge singer (Goldberg) who takes refuge from the mob in a San Francisco convent. As they waited at the light last September, the shooting date was fast approaching, the script was a wreck, and Whoopi was not amused. Since signing with Disney’s Touchstone division to do the film five months earlier, she and the studio had squabbled bitterly over rehearsal schedules, the development of her character, and the direction of the film.

As the light turned green, Whoopi was ready to give Carrie Fisher an earful. At home, Whoopi took a long shower and thought it over. The whole story began three years ago. But they still didn’t have Midler. Patparker. Pat Parker The first thing you do is to forget that I'm black. 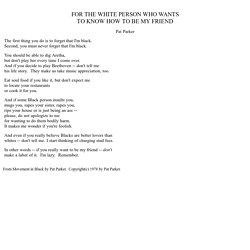 Second, you must never forget that I'm black. You should be able to dig Aretha, but don't play her every time I come over. And if you decide to play Beethoven -- don't tell me his life story. They make us take music appreciation, too. Eat soul food if you like it, but don't expect me to locate your restaurants or cook it for you. And if some Black person insults you, mugs you, rapes your sister, rapes you, rips your house or is just being an ass -- please, do not apologize to me for wanting to do them bodily harm. And even if you really believe Blacks are better lovers than whites -- don't tell me.

In other words -- if you really want to be my friend -- don't make a labor of it. From Movement in Black by Pat Parker. Learning from Audre Lorde: ways to address white supremacy. My last post concerning ways of discussing racist or white supremacist actions came full-circle for me recently. 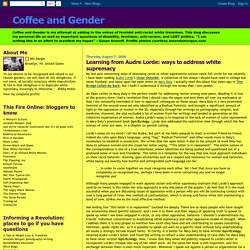 I have been reading Audre Lorde’s Sister Outsider, a collection of her essays I should have read in college but never finished, and came upon her open letter to Mary Daly. I actually read this about four years ago in This Bridge Called My Back, but I hadn’t understood it through the lenses that I now posses. An Open Letter to Mary Daly is the perfect model for addressing racism among ones peers. Reading it in line at the grocery store I had a revelation that I should copy the pages and post them all over my workspace so that I am constantly reminded of how to approach colleagues on these issues.

Mary Daly is a very prominent feminist of the second-wave set who identified as a Radical Feminist, and brought a significant amount of light to the oppression of women in the US, especially through her writings on pornography, religion, and medicine. CYNTHIA ENLOE / THE GLOBETROTTING SNEAKER 453 know about women's legs only by hearsay, but careful reporting in Iraq confirms t. The Cathedral and the Bazaar. The Cathedral and the Bazaar: Musings on Linux and Open Source by an Accidental Revolutionary (abbreviated CatB) is an essay, and later a book, by Eric S. 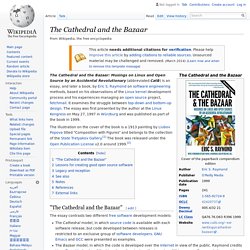 Raymond on software engineering methods, based on his observations of the Linux kernel development process and his experiences managing an open source project, fetchmail. It examines the struggle between top-down and bottom-up design. The essay was first presented by the author at the Linux Kongress on May 27, 1997 in Würzburg and was published as part of the book in 1999. The illustration on the cover of the book is a 1913 painting by Liubov Popova titled "Composition with Figures" and belongs to the collection of the State Tretyakov Gallery.[1] The book was released under the Open Publication License v2.0 around 1999.[2] "The Cathedral and the Bazaar"[edit] The essay contrasts two different free software development models: Lessons for creating good open source software[edit] Legacy and reception[edit] See also[edit] Notes[edit]

37 Life-Changingly Useful Websites You Should Know About.