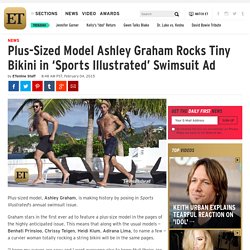 Graham stars in the first ever ad to feature a plus-size model in the pages of the highly anticipated issue. This means that along with the usual models — Benhati Prinsloo, Chrissy Teigen, Heidi Klum, Adirana Lima, to name a few — a curvier woman totally rocking a string bikini will be in the same pages. “I know my curves are sexy and I want everyone else to know that theirs are too. There is no reason to hide and every reason to flaunt,” Graham says in a statement.

The ad is part of a new swimsuitsforall campaign, #CurvesinBikinis, that aims to help celebrate the beginnings of the ‘Curvy Girl Era’ and to help women feel confident and sexy in any swimsuit. “The world is ready for more curves in bikinis,” Graham says of the campaign. NEWS: 'Sports Illustrated' Plans Swimsuit Fan Party in Nashville The Sports Illustrated swimsuit issue hits stands on Feb. 9.

When Selfie-Improvement Apps Go Too Far. The number of "likes" and comments that teens receive on their Instagram, Tumblr, and Facebook photos speaks volumes. 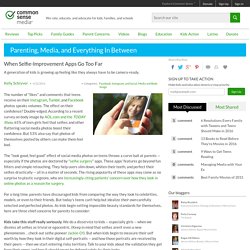 The effect on their confidence? Double-edged. According to a recent survey on body image by AOL.com and the TODAY Show, 65% of teen girls feel that selfies and other flattering social media photos boost their confidence. But 53% also say that photos of themselves posted by others can make them feel bad. The "look good, feel good" effect of social media photos on teens throws a curve ball at parents -- especially if the photos are doctored by "selfie surgery" apps. 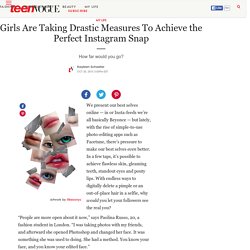 In a few taps, it’s possible to achieve flawless skin, gleaming teeth, standout eyes and pouty lips. With endless ways to digitally delete a pimple or an out-of-place hair in a selfie, why would you let your followers see the real you? “People are more open about it now,” says Paolina Russo, 20, a fashion student in London. “I was taking photos with my friends, and afterward she opened Photoshop and changed her face. It was something she was used to doing. But looking one way online and another in the mirror may be making many young women despair about the disconnect. When Selfie-Improvement Apps Go Too Far. Teenvogue. Time Lapse Video Shows Model's Photoshop Transformation. ESPN The Magazine Body Issue. US watchdog bans photoshopping in cosmetics ads. In an interesting move that should finally bring the United States’ fast-and-loose advertising rules and regulations into line with the UK and EU, the National Advertising Division (NAD) — the advertising industry’s self-regulating watchdog — has moved to ban the misleading use of photoshopping and enhanced post-production in cosmetics adverts. 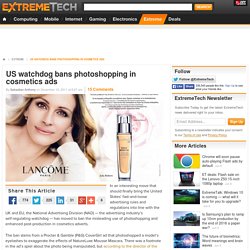 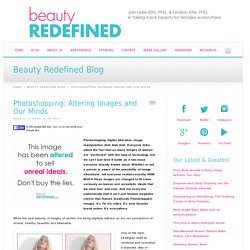 Everyone talks about the fact that so many images of women are “perfected” with the help of technology, but we can’t just toss it aside as a non-issue everyone already knows about. Whether or not a person is aware of the possibility of image alterations, not everyone realizes exactly HOW MUCH these images are changed to fit some seriously un-human and unrealistic ideals that we view over and over. The New ‘Normal Barbie’ Comes With an Average Woman’s Proportions — And Cellulite Sticker Accessories. It’s a month before the holidays and you’re grappling with a serious toy buyer’s dilemma: 0n the one hand, you kind of just want to get your kid a Barbie; on the other hand you’d rather not perpetuate the peddling of anatomical ideals that are so impossible to achieve — and impractical. 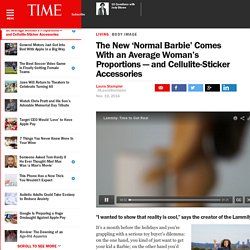 (Were Barbie human, she’d have to walk on all fours because of her tiny feet and because she would only have room for half a liver.) That’s why graphic designer turned toymaker Nickolay Lamm created the Lammily doll — what the Barbie would look like if she actually had the measurements of an average 19-year-old woman’s body (based on CDC data). And brown hair. California Woman's Shocking Descent Into Anorexia, in Her Own Words. Rachael Farrokh, 37, says she has been fighting a battle with anorexia for 10 long years -- but now, an extreme decline in her health has her determined to seek treatment and share her story with the world. 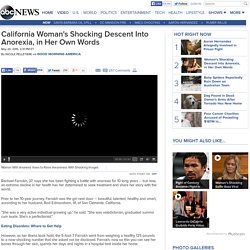 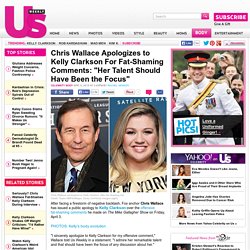 PHOTOS: Kelly's body evolution "I sincerely apologize to Kelly Clarkson for my offensive comment," Wallace told Us Weekly in a statement. "I admire her remarkable talent and that should have been the focus of any discussion about her. "