The Vikings’ Slave Trade. From Woven Sails to Slavery: Viking lovers, this episode of the Medieval Grad Podcast is for you! 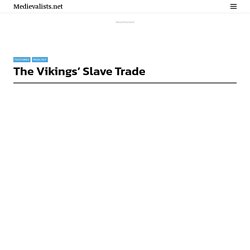 Lucie Laumonier meets Sarah Christensen, who studies the slave trade in the Western Viking world and its intersections with gender. We learn that enslaved women often worked in textile production, weaving the sails Viking men used to propel their ships. Sarah Christensen is a PhD student in history at Brown University. Click here to see her university website or follow Sarah on Twitter @sarah0ferris Some recommended readings related to this episode: If the shoe fits: the gendered connotations of footwear in art history. In the early modern period, one's social and economic status could be quickly inferred through footwear. 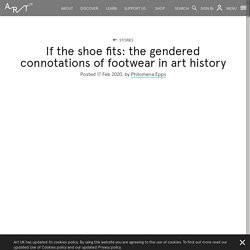 The Medieval Podcast with @5MinMedievalist - Medieval Sexuality with @GoingMedieval. ‘I wanted to make them a little book’: The knight and the book for his daughters. Oh, Baby! Medieval Childbirth. Twitter. Medieval Noble Ladies and Their Servants: Who Wore What and Why. By Sophie Andrade. 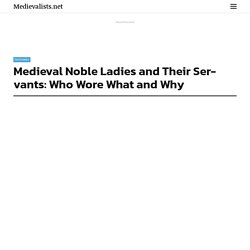 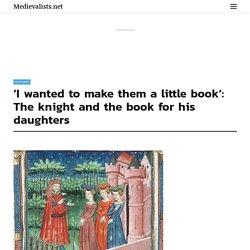 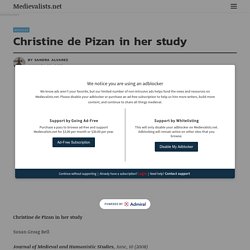 Christine de Pizan. 1400-1409. The Queen’s own houppelandes, as seen in contemporary manuscripts (Fig. 2) were likely made of silk brocaded or embroidered with gold, with ermine-lined bombard sleeves and a wide, turned-down collar. Genuine ermine fur, already long associated with royalty and the nobility, was so desirable that its characteristic black tails were imitated with pieces of black lambskin, sewn on to white rabbit or white lambswool (Scott 156). Internet Archive Search: ( (Christine OR Christiné) AND (Pisan OR Pizan) ) Queens of Infamy: Eleanor of Aquitaine. Anne Thériault | Longreads | April 2018 | 16 minutes (4,246 words) From the notorious to the half-forgotten, Queens of Infamy, a Longreads series by Anne Thériault, focuses on badass world-historical women of centuries past. 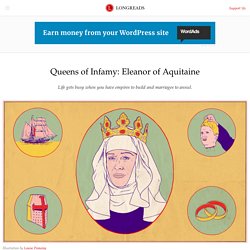 I’ve been fascinated by Eleanor of Aquitaine for as long as I can remember. That sounds like it might be hyperbole or bragging, but it’s genuinely not. For most of that time I didn’t even know her name. To me, she was the royal mother in Disney’s Robin Hood, a woman whose maternal love — or lack thereof — shapes the entire story. Eleanor was a scene-stealer in real life, too, and more than deserving of her own Disney franchise. Eleanor was probably born in 1122 or 1124 (although dates are conflicting, because even nobility couldn’t be bothered to keep decent records when it came to girls). Medieval Woman’s Hidden Art Career Revealed By Blue Teeth. Medieval Woman’s Hidden Art Career Revealed By Blue Teeth Associated Press January 9, 2019 About 1,000 years ago, a woman in Germany died and was buried in an unmarked grave in a church cemetery. 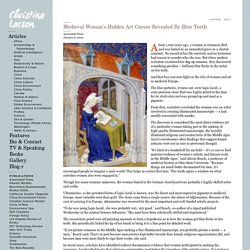 No record of her life survived, and no historian had reason to wonder who she was. But when modern scientists examined her dug-up remains, they discovered something peculiar — brilliant blue flecks in the tartar on her teeth. And that has cast new light on the role of women and art in medieval Europe. The blue particles, it turns out, were lapis lazuli, a semi-precious stone that was highly prized at the time for its vivid color and was ground up and used as a pigment. From that, scientists concluded the woman was an artist involved in creating illuminated manuscripts — a task usually associated with monks. Women in medieval society. From attitudes to original sin to the roles of wives, mothers and nuns, Dr Alixe Bovey examines the role of women in medieval society. Christine de Pizan, The Book of the Queen An illustration of Christine de Pizan writing in her study, from The Book of the Queen (Harley MS 4431, f. 4r) View images from this item (1) Usage terms. 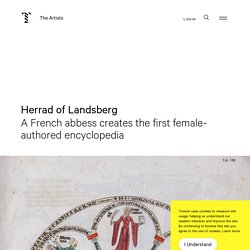 Not long after Hildegard Von Bingen invented the first constructed language and wrote the first extant description of the female orgasm, Herrad of Landsberg set out to document all human knowledge. Herrad of Landsberg was an Alsatian nun and the abbess of the Hotenburg Abbey on the border between France, Germany and Switzerland. Herrad was a teacher and theologian, and after being elected abbess in 1167, the leader of one of the most powerful Abbeys in France. Hotenburg Abbey already provided some of the most comprehensive education available to women in the 12 century - and Herrad decided to make it even better.