Incubus - Wish You Were Here. Blink-182 - Not Now. P!nk - Who Knew. Momondo – The DNA Journey. I Am Giannis, Episode 1.  Super Bowl 2020. (41) Google — Year in Search 2020. Mamba Forever. Thai insurance commercial. Jason Momoa Superbowl Commercial. Coca-Cola Sunset. Find Your Greatness London Nike 2012 - Motivational. How Ireland's second wave of Covid got so bad, so fast. Ireland recently made the headlines all over the world – for the wrong reason. 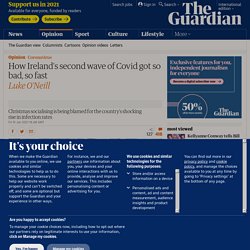 We had the highest daily number of new confirmed cases of Covid-19 anywhere. The seven-day rolling average hit 1,394 cases per million – ahead of the UK on 810, and the US on 653. We had been doing so well. On 13 December the chief medical officer, Dr Tony Holohan, announced that Ireland had the lowest number of cases per capita in Europe. We felt pretty good about ourselves. The Irish love Christmas, and a major cause of this surge was socialising. A stark warning came from Irishman Dr Gabriel Scally, of the Royal Society of Medicine in the UK, who said: “If we have a very merry Christmas, and meet lots of friends and relations, then I fear that in January and February we may well be burying some relations.” Cyberpunk 2077 review – could it ever live up to the hype? So here we finally are, in Night City. 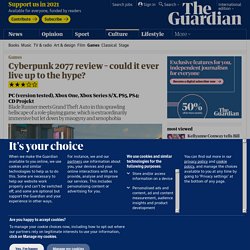 Almost a decade after it was first announced, CD Projekt’s massively ambitious role-playing game has launched into a swirling maelstrom of hype and controversy that befits its salacious, histrionic setting. PlayStation 5 v Xbox Series X: how will the rival consoles compare? Last week, in a livestream watched by millions, Sony revealed the first games coming to its PlayStation 5 console. 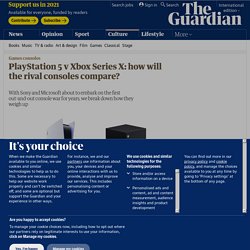 Due out this winter, the machine will be competing with Microsoft’s Xbox Series X in the first major console war since 2013. But what will these new devices offer that Xbox One and PlayStation 4 do not – and will this finally get the kids off Fortnite? Technology Like the Xbox One and PS4, the two new machines have quite similar tech, much of it provided by leading semiconductor manufacturer AMD. This is where things get a bit technical. Both consoles also have dedicated graphics processing units (GPUs) to drive their high-detail 3D visuals, also based on AMD technology: its Radeon Navi RDNA graphics architecture.

Both Sony and Microsoft say their machines will be able to run content at screen resolutions of up to 8K, but it’s not clear whether this will be games or 8K movies. Storage Accessories. Video games have replaced music as the most important aspect of youth culture. It would be incorrect to say video games went mainstream in 2020. 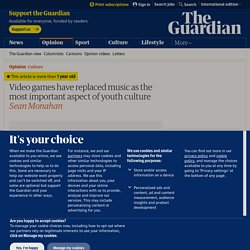 They’ve been mainstream for decades. But their place in pop culture feels far more central – to gamers and non-gamers alike – than ever before. In part, this is due to desperate marketers hunting for eyeballs in a Covid landscape of cancelled events. Coachella wasn’t happening, but Animal Crossing was open was for business. Politicians eager to “Rock the Vote” looked to video games to reach young voters. Childish Gambino - This Is America. Beyoncé, Blue Ivy, SAINt JHN, WizKid - BROWN SKIN GIRL. P!nk - Don't Let Me Get Me. Hide. Guava Island - Clip: Summertime Magic With Donald Glover and Rihanna. How good can Bruno Fernandes make Manchester United? Anfield may tell. This is not the beginning of the title run-in. 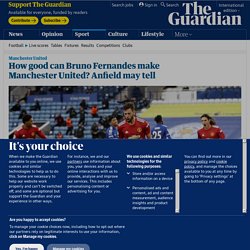 This is not the start of the middle, or the beginning of the end. Let’s face it, nobody really knows what’s going on up there in this jetlagged oddity of a Premier League season, when points have been scattered with luxurious abandon, and none of these teams seem ready to find a sustained higher gear. Not that it makes much difference. Still I Rise by Maya Angelou. Telephone Conversation - Wole Soyinka (b.1934)

Chimamanda Adichie: The danger of a single story. Lukaku - The Players' Tribune. I remember the exact moment I knew we were broke. I can still picture my mum at the refrigerator and the look on her face. I was six years old, and I came home for lunch during our break at school. Shaqiri - The players' tribune. Now I Got My Own Army Guy? 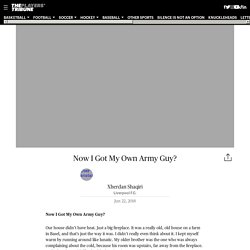 Our house didn’t have heat. Just a big fireplace. It was a really old, old house on a farm in Basel, and that’s just the way it was. I didn’t really even think about it. I kept myself warm by running around like lunatic. My family had left Kosovo before the war broke out, when I was four years old, and they tried to make a life in Switzerland with me and my two brothers. Switzerland is very expensive for anyone, but it was extra difficult for my parents because they were sending a lot of money back home to our family members who were still in Kosovo. But when the war started it became impossible to go back, and things were very difficult for my family members who were stuck there. Funny story, actually … Ronaldo was my idol.