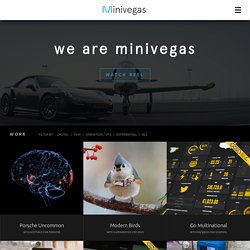 And we love doing it. Digital When it comes to good old digital we love a great website, app or experience, and get over-excited about beautiful design, smart UX and brainy tech solutions. We are passionate about new technologies and are always looking at ways to keep ahead of the game so we try our best to shoe-horn dedicated R&D time in around our client projects – just so we’re ready for the next one. Our digital chops start with creative and design and go all the way through to development, build and testing. 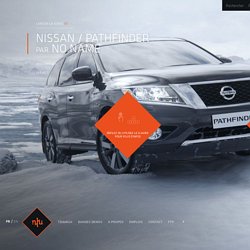 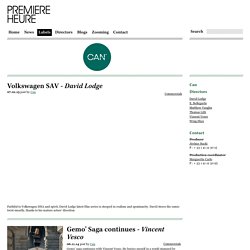 Where Will Your Friends Take You? WWF E 60 YouTube. Blink on Vimeo. Blink is an award-winning British commercial production company based in London. 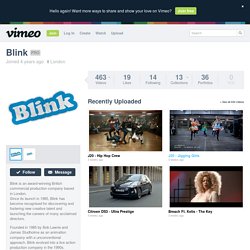 Since its launch in 1985, Blink has become recognised for discovering and fostering new creative talent and launching the careers of many acclaimed directors. Founded in 1985 by Bob Lawrie and James Studholme as an animation company with a unconventional approach, Blink evolved into a live action production company in the 1990s. Today, Blink is one of the industry's most respected production companies, consistently producing innovative, beautifully crafted and intelligent work whilst maintaining a distinctive style. Blink's roster of directors represents a diverse collection of talent working across the traditional and emerging realms of advertising. Blink was named 'Production Company of the Year' by Campaign Magazine in 2012 for the second year running, having already received the title from both Campaign and Televisual Magazines in 2011. External Links. Blink. agency. Death of a lamp: touching or ironic?

The Mill Homepage - The Mill. Work. GPY&R. Del Campo Saatchi & Saatchi, Argentina - Home. Full-Service Creative Advertising Agency, Digital Agency, Marketing Communications and Brand Strategy. BBH London. The Secret Life of Ringan Ledwidge. In this interview with director Ringan Ledwidge, he lets us in on the secrets behind his blockbuster commercials for brands including Nike, Axe and The Guardian. 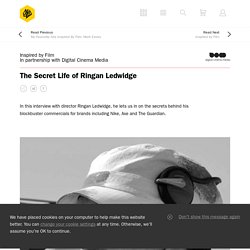 Susan Glenn Award: Nomination / TV & Cinema Advertising / 2013Agency: BBH New YorkClient: Unilever The gift of this brief was Peter Rosch the copywriter. He’s a really great writer, and it’s (sadly) rare that you get beautifully written scripts. There are certainly people capable of doing it; it’s just whether they get the scripts through. My thinking was that it needed to feel like memories. 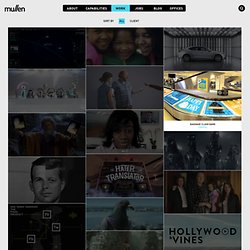 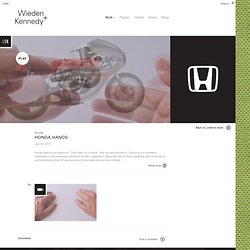 This spot is a seamless celebration of the enduring curiosity of Honda's engineers, telling the story of their inquisitive spirit in miniature and condensing their 65-year journey of innovation into just two minutes. An impressive array of Honda products is transformed by the hands of an engineer, with lawnmowers, motorbikes and Asimo the robot making appearances, and a few clever details thrown into the mix to reward equally curious viewers. Honda doesn't just believe in "The Power of Dreams," they live and breathe it. Inner Beauty. Old Spice. Scent Vacation. The Man Your Man Could Smell Like. Somesuch & Co » Ready To Run?