Sandun's blog: Create a traditional looking radio button list in Ionic Framework. Ionic framework is a tool to develop UI designs for mobile devices apps development, and in my case I’m developing a hybrid mobile app for android and iPhone. 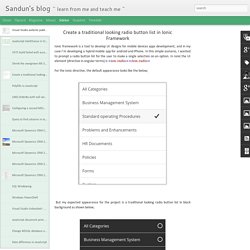 In this simple scenario, I wanted to prompt a radio button list for the user to make a single selection on an option. In Ionic the UI element (directive in angular terms) is <ion-radio></ion-radio> For the Ionic directive, the default appearance looks like the below; But my expected appearance for the project is a traditional looking radio button list in black background as shown below; In the directive, there is a supportive way to change the radio button icon for the active item only using the attribute icon="ion-android-radio-button-on" in the directive.

First I have come up with a solution that the icon attribute going to use an angular binding, and that bounded field is dynamically changing in the user selection, which will reflect the appearance I want as above. /*ionic radio buttons override*/ .item { Structural Patterns. Sometimes we need the ability to control the access to an object. 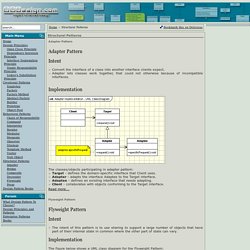 For example if we need to use only a few methods of some costly objects we'll initialize those objects when we need them entirely. Until that point we can use some light objects exposing the same interface as the heavy objects. These light objects are called proxies and they will instantiate those heavy objects when they are really need and by then we'll use some light objects instead. This ability to control the access to an object can be required for a variety of reasons: controlling when a costly object needs to be instantiated and initialized, giving different access rights to an object, as well as providing a sophisticated means of accessing and referencing objects running in other processes, on other machines. Consider for example an image viewer program.

The intent of the proxy pattern is to provide a Placeholder for an object to control references to it. Working with Geolocation watchPosition() API - The Code of a Ninja. <title>Geolocation watchPosition() by The Code of a Ninja</title> // you can specify the default lat long var map, currentPositionMarker, mapCenter = new google.maps.LatLng(14.668626, 121.24295), map; 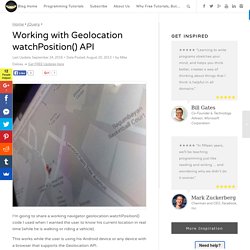 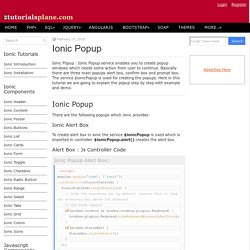 Basically there are three main popups alert box, confirm box and prompt box. The service $ionicPopup is used for creating the popups. Here in this tutorial we are going to explain the popup step by step with example and demo. SDK Installation · OneSignal Push Notification Service Documentation. 04. Scheduling · katzer/cordova-plugin-local-notifications Wiki. The essential purpose of local notifications is to enable an application to inform its users that it has something for them — for example, a message or an upcoming appointment — when the application isn’t running in the foreground. 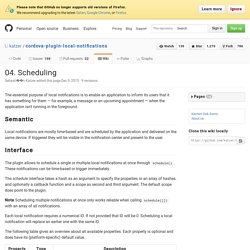 Semantic Local notifications are mostly time-based and are scheduled by the application and delivered on the same device. If triggered they will be visible in the notification center and present to the user. Interface. Make It Easy: Angular js add class to active element. Here I am going to explain how to add active class on dynamically added content or link while on clicking. 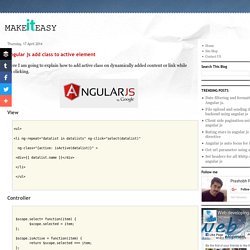 View Controller $scope.select= function(item) { $scope.selected = item; }; $scope.isActive = function(item) { return $scope.selected === item; }; Click on any link, active class will be added to the active element. The Many Ways To Use ngClass. # Using ngClass For our examples and tutorials here, we’ll be using input boxes (text and checkbox) to dynamically/conditionally add classes to our HTML elements. # ngClass Using String Syntax This is the simplest way to use ngClass. You can just add an Angular variable to ng-class and that is the class that will be used for that element. Inmagik/ionic-modal-select: Modal select for Ionic Framework. Adding a Custom Overlay - Google Maps JavaScript API v3. // Set the custom overlay object's prototype to a new instance // of OverlayView. 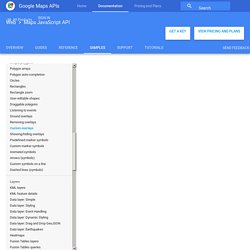 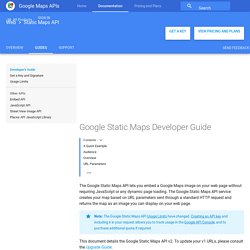 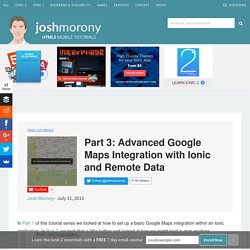 Part 1: Using the $http Service in Ionic to Dynamically Load Google Map Markers. In a recent tutorial I showed you how to integrate Google Maps into an Ionic application, if you haven’t already read that tutorial I would recommend doing so now because we will be building on top of that in this tutorial. 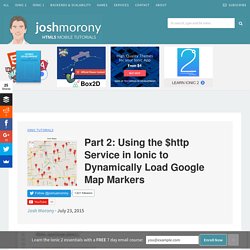 We’ve already created a simple Google Maps display with a single marker and info window which is created wherever the users current position is. That in itself maybe useful in some cases: some applications may just be trying to show the location of a single event or business on a map for example. A lot of applications that use Google Maps will be dynamic though, we might be mapping user submitted locations for example, and if we don’t know where all the markers go when we create our application then the app we created in the last tutorial will not be suitable. Another issue is that if we have lots of markers, it’s bad for performance to try and load them all at once (and the user doesn’t need markers loaded in for London if they’re only looking in Adelaide). or. Ionic Quick Tip: Change Color of Active Tab Icon. AngularJS: Simple Custom Filter. AngularJS - How to make a custom filter in AngularJS.

AngularJS is a great open-source JavaScript Framework maintained by Google. This framework has got some compelling features. Filters is one of them for formatting the data in users locale. So we’ve decided to write a simple custom angular filter to sort clients table filtered by company. At first, we initialize our main angular module which invoke the root element of our application. ClientCtrl is our main angular controller and some random default $scope data models are companyList & clients. We have generate the company options list dynamically from $scope.companyList, in a button group named Filter by Company, for selecting multiple company to filter the clients table. User Authentication with Ionic and Parse, Part 2: Facebook Login. In Part 1 we generated a new Ionic application, set up Parse, and created an email login system. You will need to have Parse set up in an Ionic application already to complete this tutorial, so I would recommend going back and taking a look at Part 1 if you haven’t already.

Creating a new user using an email address with Parse was pretty easy, but it is quite common for applications to offer Facebook as a sign up option as well. Parse does support Facebook, and you can integrate it quite easily using code like this: The only problem though is that this won’t use the native Facebook application installed on the users device for authentication (if the user wants to log in with Facebook, chances are they have the app installed). Ionic Framework Tutorial. How to Integrate Facebook Login into a Cordova Based App.

If your App needs Login or Registration functionality, then using 3rd party services such as Facebook Authentication are useful tools to utilize. This tutorial is for developers using Cordova with jQuery Mobile for UI and ngCordovaOauth to add Facebook login functionality. The app will enable users to login via Facebook and then display their basic profile information. GitHub - nraboy/ng-cordova-oauth: AngularJS oauth library for use with Apache Cordova projects. How To Handle User Authentication With AngularJS. Creating URL schemes. What we’ll be able to do when we’re done At the end of this tutorial, we’ll be able to open an example app by typing “ into Safari for iOS. Why this is important Twitter Cards drives downloads to your iOS and Android applications. By configuring an URL scheme for your application, you can register a URL that Twitter can use to check to discover if the current user has your application installed.

Overview # In this tutorial we'll be building a simple version of a Movies app that fetches 25 movies that are in theaters and displays them in a ListView. JavaScript Style Guide. AngularJS Using ng-show and ng-hide. GitHub - inmagik/ionic-modal-select: Modal select for Ionic Framework. Services in AngularJS simplified with examples.

Step 6: Start writing our AngularJS application. The files that you see in the web browser can be found in the app subfolder of your mytodo directory. All the instructions in this section assume that you are editing files in this app folder. If you are unsure about any of the changes you should be doing, refer to the final source code. Création d'applications mobiles avec ionic, Sqlite et WebSql. Dans cet article on va créer une application mobile de prise de notes ( à la evernote mais plus rudimentaire) en utilisant ionic Framework. Read Recipes with Angular.js. {{frontmatter}} # Preface Introduction. GitHub - apla/me.apla.cordova.app-preferences: App preferences plugin for cordova. Storing Local Data in a Cordova App. Most mobile apps will need to store data locally and HTML5 introduced new options for storing data locally.

GitHub - mbenford/ngTagsInput: Tags input directive for AngularJS. Getting Started with MQTT and Clojure. About this guide This guide is a quick tutorial that helps you to get started with the MQTT protocol in general and the Machine Head in particular. Gallery - Ionic Marketplace. Using Views in Apache Cordova. Cordova Battery Status. Onclick - Change button on click() Ionic Gallery - Ionic Marketplace.