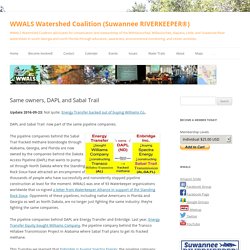 DAPL and Sabal Trail: now part of the same pipeline companies. The pipeline companies behind the Sabal Trail fracked methane boondoogle through Alabama, Georgia, and Florida are now owned by the companies behind the Dakota Access Pipeline (DAPL) that wants to pump oil through North Dakota where the Standing Rock Sioux have attracted an encampment of thousands of people who have successfully and nonviolently stopped pipeline construction at least for the moment.

INDIGENOUS RISING. ENVIRONMENTAL INTEGRITY. PUBLIC EMPLOYEES for ENVIRONMENTAL RESPONSIBILITY (PEER) Environmental Group Files Federal Complaint Against PHMSA To Produce Records. On April 10, 2013, Public Employees for Environmental Responsibility (PEER) filed suit against PHMSA in the US District Court for the District of Columbia, alleging that the Agency has failed to produce records and documents in response to requests made by PEER under the Freedom of Information Act (FOIA). 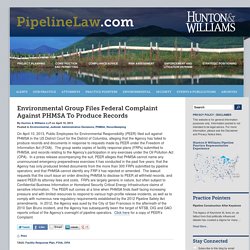 The group seeks copies of facility response plans (FRPs) submitted to PHMSA, and records relating to the Agency’s participation in any exercises under the Oil Pollution Act (OPA). In a press release accompanying the suit, PEER alleges that PHMSA cannot name any unannounced emergency preparedness exercises it has conducted in the past five years; that the Agency has only produced limited documents from the more than 300 FRPs submitted by pipeline operators; and that PHMSA cannot identify any FRP it has rejected or amended. The lawsuit requests that the court issue an order directing PHMSA to disclose to PEER all withheld records, and award PEER its attorney fees and costs.