GETTING THINGS DONE: Habits and Whatnot

The "MIT" solution: how to make consistent progress on goals. How to set goals - using the ONE GOAL strategy. Academic Gameplan. We recently asked a group of students, parents, teachers, and coaches how we could help them, and one student sent this: “How do I NOT waste time? 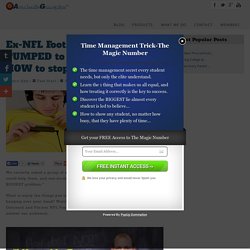 It’s my BIGGEST problem.” Want to enjoy the things you love without the stress of homework or projects hanging over your head? Essentialism: Focus on Fewer Tasks to Get More Work Done. This is a guest post by Niklas Goeke. 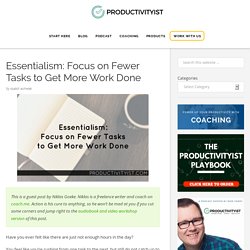 Niklas is a freelance writer and coach on coach.me. Action is his cure to anything, so he won’t be mad at you if you cut some corners and jump right to the audiobook and video workshop version of this post. Have you ever felt like there are just not enough hours in the day? This Morning Routine will Save You 20+ Hours Per Week – The Mission. The traditional 9–5 workday is poorly structured for high productivity. 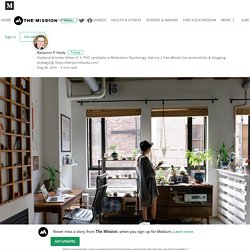 Perhaps when most work was physical labor, but not in the knowledge working world we now live in. Although this may be obvious based on people’s mediocre performance, addiction to stimulants, lack of engagement, and the fact that most people hate their jobs — now there’s loads of scientific evidence you can’t ignore. The Myth of the 8 Hour Workday The most productive countries in the world do not work 8 hours per day. Actually, the most productive countries have the shortest workdays. People in countries like Luxembourg are working approximately 30 hours per week (approximately 6 hours per day, 5 days per week) and making more money on average than people working longer workweeks. 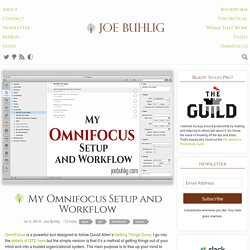 I go into the details of GTD here but the simple version is that it’s a method of getting things out of your mind and into a trusted organizational system. The main purpose is to free up your mind to have ideas, not hold them. This article focuses on Omnifocus 2 for Mac. I use the iPhone and iPad versions as well, but here I want to walk you through the setup of my central hub. There are two main sides of Omnifocus: Projects and Contexts. Projects Using David Allen’s definition, projects are anything you need to do that takes two or more actions to complete.

In Omnifocus, there is the ability to create folders and hierarchies of projects. I created a folder for each of these and put them in order of priority. Each folder contains a list of projects associated with that area of life as well as a Single Actions List for each area. Contexts Contexts are just that. Perspectives This is where the work gets done. The Complete Guide on How to Develop Focused Self-Discipline.

The Most Motivational Talk EVER! - David Goggins. Navy SEALs Have a '40 Percent Rule' And It's the Key to Overcoming Mental Barriers. How to Build Self-Discipline Lesson #1: How to Form a Habit. Conseils à un Jeune Homme que Beaucoup d'Entre Vous Devez Entendre. Hours Don't Lie: Why Tracking Time = Getting Things Done (and Why to Live Abroad) Plenty of us say we're working on a [screenplay, novel, song, portfolio, website, acting career] while we we're only [waiting tables, editing copy, being an assistant] to pay the bills. 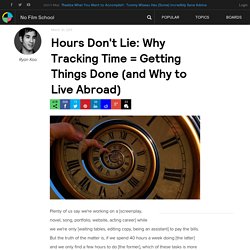 But the truth of the matter is, if we spend 40 hours a week doing [the latter] and we only find a few hours to do [the former], which of these tasks is more important to us? The truest indicator of what's important to us is the amount of time we devote to something. Not what we spend money on. No what we say we care about. So for the last 16 months, I've tracked my time religiously. As the saying goes, "the first step towards change is awareness. " 40 Incredible Home Life Hacks That Will Simplify Your Life. 12 Weekend Habits of Highly Successful People. I’ve read countless articles about what successful people do on their weekends. 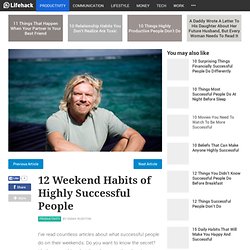 Do you want to know the secret? It’s the same thing that they do every other day. As Aristotle said, “We are what we repeatedly do. Excellence, then, is not an act, but a habit.” Here are 12 weekend habits of highly successful people: Here’s How to Finish Anything You Start. Why you should read this chapter We all know the feeling–the feeling that we’re incapable of finishing projects. 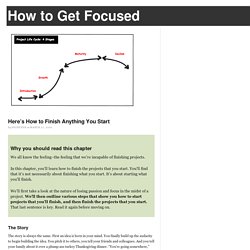 In this chapter, you’ll learn how to finish the projects that you start. You’ll find that it’s not necessarily about finishing what you start. It’s about starting what you’ll finish. Motivation. “At dawn, when you have trouble getting out of bed, tell yourself: ‘I have to go to work–as a human being. 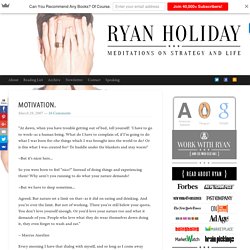 What do I have to complain of, if I’m going to do what I was born for–the things which I was brought into the world to do? Or is this what I was created for? To huddle under the blankets and stay warm?’ –But it’s nicer here… So you were born to feel “nice?” Leaf by Bellabeat. Tip: Use your Android device with Google Docs as an easy, free dictation tool. Text dictation software like Dragon is bulky and expensive, but for many people with special needs who require this type of functionality, there have been few alternative options. 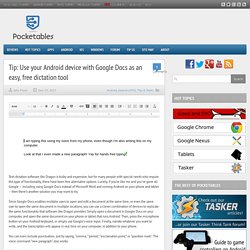 Luckily, if you’re like me and you’ve gone all Google – including using Google Docs instead of Microsoft Word and running Android on your phone and tablet – then there’s another solution you may want to try. Since Google Docs enables multiple users to open and edit a document at the same time, or even the same user to open the same document in multiple locations, you can use a clever combination of devices to replicate the same functionality that software like Dragon provides: Simply open a document in Google Docs on your computer, and open the same document on your phone or tablet that runs Android.

Then, press the microphone button on your Android keyboard, or simply use Google’s voice input. You can even include punctuation, just by saying, “comma,” “period,” “exclamation point,” or “question mark.” 3 Surprisingly Simple Things You Can Do to Build Better Habits. Building good habits can be difficult. 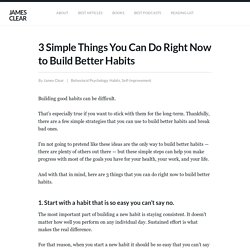 That’s especially true if you want to stick with them for the long-term. Thankfully, there are a few simple strategies that you can use to build better habits and break bad ones. Introducing the Hipster PDA. This article was originally posted during the first week of 43 Folders' existence, and, pound for pound, it remains one of the most popular page on the site. Please be sure to also visit related pages, browse our Hipster PDA topic area, plus, of course you can search on the Hipster PDA across our family of sites.

Recently, I got sick of lugging my Palm V around, so I developed a vastly superior, greatly simplified device for capturing and sharing information. Procrastination hack: '(10+2)*5'. Following on the idea of the procrastination dash and Jeff’s progressive dash, I’ve been experimenting with a squirelly new system to pound through my procrastinated to-do list. Brace yourself, because it is a bit more byzantine than is Merlin 2005’s newly stripped-down habit. It’s called (10+2)*5, and today it will save your ass. Who it’s for procrastinatorsthe easily distractedcompulsive web-surferspeople with a long list of very short tasks (a/k/a “mosquitos”) people having trouble chipping away at very large tasks.

How to Use 43 Folders. A very simple guide to leaving here quickly so you can get back to making something awesome. Ask yourself… Why am I here right now instead of making something cool on my own? What’s the barrier to me starting that right now? This is not an insult or put-down. It’s a useful question. Productivity 101: A Primer to the Getting Things Done (GTD) Philosophy.

10 Useful Tasker Profiles for Beginners (Part 1) Everyone who enjoys Android should use Tasker. At least once! Now for those of you, who don’t know what Tasker is, well it’s an Android automation app that can automate almost anything on your Android. For instance; it can send you an emergency text to your significant others before you battery dies, auto-rotate the screen when you open YouTube app or automatically disable lock screen when you at home etc.

In a nutshell, tasker is like IFTTT i.e. Marginalia, the Anti-Library, and Other Ways to Master the Lost Art of Reading. Warren Buffett is undoubtedly considered one of the greatest investors of all times. His empire, Berkshire Hathaway, is worth $355 billion, an increase of 1,826,163 percent since 1964 when Buffett took over. He owns (or owns big chunks) of some of the biggest brands in the world including GEICO, Dairy Queen, NetJets, half of Heinz, and significant holdings in companies such as American Express, IBM, and Wells Fargo. To-Do Lists and The Structured Procrastinator. Structured Procrastination: Do Less & Deceive Yourself. 10 Great Notebooks Productive People Love. This Is Why You Should Take Notes By Hand Instead Of With A Laptop. 7 Essential Tips You Need to Follow If You Want to Start Writing.

6 Times When Using A Pen Is Better Than Using A Keyboard. A Mindmap Of How To Be Productive. How To Have The Most Productive Day Of Your Life. Mind map with the outer circles color coded to correspond with the key. The “Getting Shit Done” Sleep Cycle  Identity-Based Habits: How to Actually Stick to Your Goals This Year. Change is hard. You've probably noticed that. We all want to become better people — stronger and healthier, more creative and more skilled, a better friend or family member. But even if we get really inspired and start doing things better, it's tough to actually stick to new behaviors. It's more likely that this time next year you'll be doing the same thing than performing a new habit with ease.

GTD in 15 minutes – A Pragmatic Guide to Getting Things Done. GTD—or “Getting things done”—is a framework for organising and tracking your tasks and projects. Its aim is a bit higher than just “getting things done”, though. 6 powerful "look into" verbs (+ 1 to avoid)