Obama Administration: "Don't Tread on Me" Clothes are Racist. Be careful what you say. 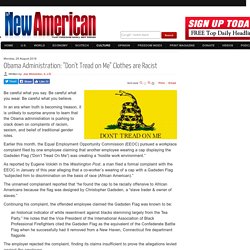 Be careful what you wear. Be careful what you believe. In an era when truth is becoming treason, it is unlikely to surprise anyone to learn that the Obama administration is pushing to crack down on complaints of racism, sexism, and belief of traditional gender roles. Earlier this month, the Equal Employment Opportunity Commission (EEOC) pursued a workplace complaint filed by one employee claiming that another employee wearing a cap displaying the Gadsden Flag (“Don’t Tread On Me”) was creating a “hostile work environment.” Obama speaks about racism, but what has he done about it? President Barack Obama spoke Wednesday at a memorial for five Dallas officers shot by a sniper angered by the deaths of black men at the hands of police. 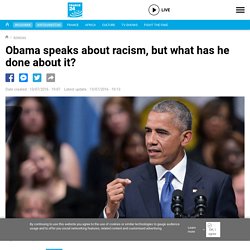 But has the first African-American US president gone beyond words in tackling racial issues? There were two names and three little words that many in the nation were waiting to hear – or hoping not to – on Tuesday, when Obama addressed a solemn memorial service at a cavernous Dallas symphony hall. Surrounded by Dallas city police officers on a stage bearing large photographs of the five policemen slain by a black US Army veteran, Obama was navigating tricky waters as the ghosts of the near and distant past appeared to haunt the Morton Meyerson Symphony Center. America’s 44th – and first black – president was at yet another memorial service for the victims of gun violence.

Why Race Has Been the Real Story of Obama's Presidency All Along. A few weeks ago, the liberal comedian Bill Maher and conservative strategist and pundit Bill Kristol had a brief spat on Maher’s HBO show, putatively over what instigated the tea party but ultimately over the psychic wound that has divided red America and blue America in the Obama years. 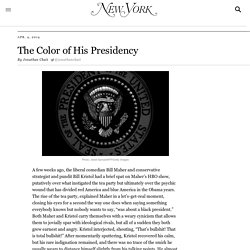 The rise of the tea party, explained Maher in a let’s-get-real moment, closing his eyes for a second the way one does when saying something everybody knows but nobody wants to say, “was about a black president.” Both Maher and Kristol carry themselves with a weary cynicism that allows them to jovially spar with ideological rivals, but all of a sudden they both grew earnest and angry. Kristol interjected, shouting, “That’s bullshit! That is total bullshit!” After momentarily sputtering, Kristol recovered his calm, but his rare indignation remained, and there was no trace of the smirk he usually wears to distance himself slightly from his talking points. Racism theater: How the media, Obama and the racism industry are tearing America apart for their own selfish gain.

(NaturalNews) America is a nation in great need of healing. 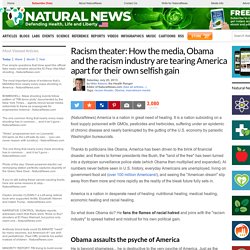 It is a nation subsisting on a food supply poisoned with GMOs, pesticides and herbicides, suffering under an epidemic of chronic disease and nearly bankrupted by the gutting of the U.S. economy by parasitic Washington bureaucrats. Thanks to politicians like Obama, America has been driven to the brink of financial disaster, and thanks to former presidents like Bush, the "land of the free" has been turned into a dystopian surveillance police state (which Obama then multiplied and expanded).

At numbers never before seen in U.S. history, everyday Americans are unemployed, living on government food aid (over 100 million Americans!) , and seeing the "American dream" slip away from them more and more rapidly as the reality of the bleak future fully sets in. America is a nation in desperate need of healing: nutritional healing, medical healing, economic healing and racial healing. Again cites racism as factor in Obama's treatment. Watch: George Washington University Students Say Obama Immigration Quote Is 'Racist'

During an immigration address in 2014, President Barack Obama announced that America would continue to deploy a slate of aggressive immigration policies that included the deportation of violent criminals. 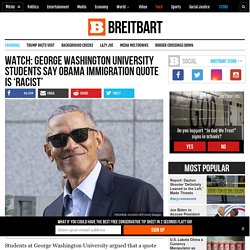 In the address, Obama bragged that deportations of criminals during his presidency were up 80 percent. We are a nation of laws. Undocumented workers broke our immigration laws, and I believe that they must be held accountable, especially those who may be dangerous. Obama, Being Black, Was Perfectly Suited to Deliver the Racist Message. There was the time the president scolded black parents in Texas: Y’all have Popeyes out in Beaumont? 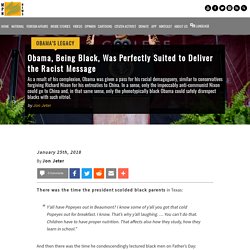 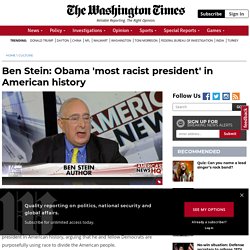 “What the White House is trying to do is racialize all politics and they’re especially trying to tell the African-American voter that the GOP is against letting them have a chance at a good life in this economy, and that’s just a complete lie,” the conservative author said on Fox News’ “America’s News HQ,” Mediaite reported. Mr. Stein rejected the notion that Republican budget cuts negatively impact minorities. “The cuts have been absolutely minuscule, absolutely tiny, unbelievably small,” he said. Fait dÃ©sormais partie dâOath. In Wake of Police Shootings, Obama Speaks More Bluntly About Race. Casting aside some of his past wariness on the issue, President Barack Obama has spoken more bluntly about race in the wake of a group of police killings of African-American men. 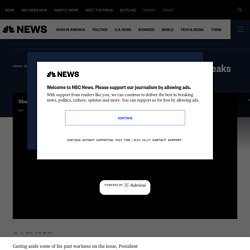 In interviews and speeches the last several weeks, after grand juries declined to indict police officers in Ferguson or Staten Island for the deaths of Michael Brown and Eric Garner, the president has invoked the word "racism" — a term he has used sparingly in the past when describing conditions in America today — to describe the challenges blacks and other minorities face. He has described racial discrimination as "embedded deeply in society. " Proof Republicans Are Racist Towards President Obama. There is no doubt that many Republicans are racist when it comes to President Obama. 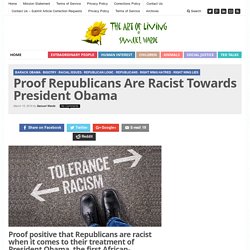 The president has been forced to endure racism, hatred and malicious lies and rumors like no other American president. As Timothy Egan of The New York Times reported in an Op/Ed piece, From the day he took office, his legitimacy has been challenged, his American birth has been suspect, and he’s been personally insulted, lectured, yelled at and disrespected in public, by public figures, in a way that few if any American presidents have ever faced. 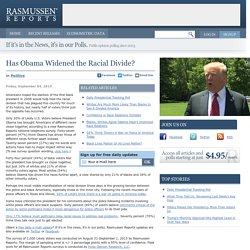 Sign up for free daily updates Friday, September 04, 2015. BUSTED! Flashback: Michelle Obama caught ‘pushing racist literature on children’ [pics] The 25 Most Obnoxious Quotes From Barack Obama. The 25 Most Obnoxious Quotes From Barack Obama. 7 Disgusting Things Obama Said While Hijacking Memorial For Slain Dallas Police. On Tuesday, President Obama descended on Dallas to hijack the memorial service for five slain police officers. He’d planned to do this for days – his White House stated in advance that Obama would get political.

But for the first few minutes of Obama’s address, it appeared that he might take stock of the moment and hold himself back. Then it all collapsed. Here are the seven worst moments of his latest opportunistic, highly political, egregiously inappropriate address: 1. 2. 3. 4. 5. 6. 7. 20 Reasons Why Obama Was the Most Racist and Divisive President In History. Barack Obama Is An Anti-White Racist. It actually SHOULDN’T be a secret that Barack Obama is not overly fond of white people. The first clue was that he spent 20 years in Jeremiah Wright’s anti-American, anti-white, anti-Semitic church. You don’t go to a church for twenty years unless you’re in general accordance with the pastor. Obama’s false racism claims are putting cops’ lives in danger. Hours before the murders of five police officers in Dallas, Texas, President Obama was again spouting false claims about racism by the police.

He sees racism whenever there is any disparity in outcomes, no matter what the cause. Obama and others inflame passions, but take no responsibility, and instead use events to push for more gun control. Yet, shouting racism can endanger the lives of police officers.