Businessinsider. The world is getting warmer and that's already causing disasters that will devastate lives and cost hundreds of billions of dollars. 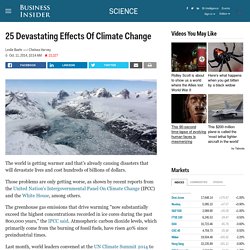 Those problems are only getting worse, as shown by recent reports from the United Nation's Intergovernmental Panel On Climate Change (IPCC) and the White House, among others. The greenhouse gas emissions that drive warming "now substantially exceed the highest concentrations recorded in ice cores during the past 800,000 years," the IPCC said.

Atmospheric carbon dioxide levels, which primarily come from the burning of fossil fuels, have risen 40% since preindustrial times. Last month, world leaders convened at the UN Climate Summit 2014 to discuss plans to reduce carbon emissions — though there were some notable absences. Most attendees recognized that failure to address these issues could spell terrible consequences for people all over the world. We've gathered some of those terrible consequences of climate change below. 1. 2. 3. 4. Wikimedia Commons/David S. Uk.businessinsider. National Geographic. Core samples, tide gauge readings, and, most recently, satellite measurements tell us that over the past century, the Global Mean Sea Level (GMSL) has risen by 4 to 8 inches (10 to 20 centimeters). 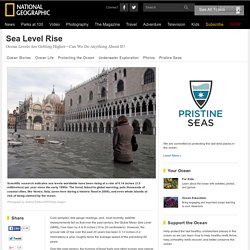 However, the annual rate of rise over the past 20 years has been 0.13 inches (3.2 millimeters) a year, roughly twice the average speed of the preceding 80 years. Over the past century, the burning of fossil fuels and other human and natural activities has released enormous amounts of heat-trapping gases into the atmosphere. These emissions have caused the Earth's surface temperature to rise, and the oceans absorb about 80 percent of this additional heat.

The rise in sea levels is linked to three primary factors, all induced by this ongoing global climate change: Thermal expansion: When water heats up, it expands. The Relative Impact of Climate Change on the Extinction Risk of Tree Specie...: EBSCO Discovery Service. Climate Change. [electronic resource] : Past, Present, and Future: EBSCO Discovery Service. Sea level rise, storm risk, denial, and the future of coastal cities. The Science of Climate Change. Climate change. Climate change is a change in the statistical distribution of weather patterns when that change lasts for an extended period of time (i.e., decades to millions of years). 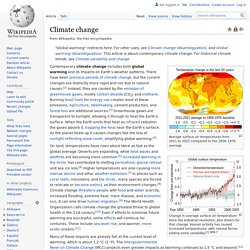 Climate change may refer to a change in average weather conditions, or in the time variation of weather around longer-term average conditions (i.e., more or fewer extreme weather events). Climate change is caused by factors such as biotic processes, variations in solar radiation received by Earth, plate tectonics, and volcanic eruptions. Certain human activities have also been identified as significant causes of recent climate change, often referred to as global warming.[1] Terminology. Why is climate important? Scenes of flooding and storms show us just how much weather and climate can affect our lives. 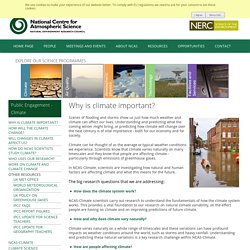 Understanding and predicting what the coming winter might bring, or predicting how climate will change over the next century is of vital importance - both for our economy and for society. Climate can be thought of as the average or typical weather conditions we experience. Scientists know that climate varies naturally on many timescales and they know that people are affecting climate - particularly through emissions of greenhouse gases. Relative importance of climate and land use in determining present and future global soil dust emission - Tegen - 2004 - Geophysical Research Letters. Abstract [1] The current consensus is that up to half of the modern atmospheric dust load originates from anthropogenically-disturbed soils. 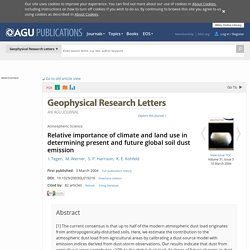 Here, we estimate the contribution to the atmospheric dust load from agricultural areas by calibrating a dust-source model with emission indices derived from dust-storm observations. Our results indicate that dust from agricultural areas contributes <10% to the global dust load. Importance of Climate Change for the Ranges, Communities and Conservation of Birds. Institut für Zoologie, Abteilung V—Ökologie, Johannes Gutenberg-Universität Mainz, Becherweg 13, D-55099 Mainz, Germany Available online 4 November 2004 Choose an option to locate/access this article: Check if you have access through your login credentials or your institution Check access Get rights and content. 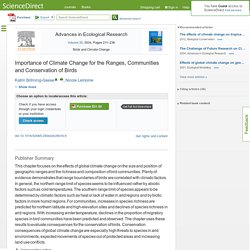 NASA: Climate Change and Global Warming. Climate Change: Security Risk? - U.S. Water Alliance : U.S. Water Alliance. A new report released by the University of Cambridge argues that the risks of climate change should be assessed in the same way as risks to national security, financial stability, or public health, concentrating on the worst that can happen and how likely that may be. 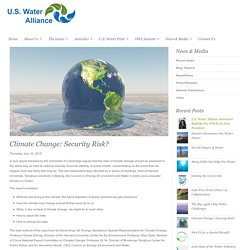 The risk assessment was informed by a series of meetings, held at Harvard University, Tsinghua University in Beijing, the Council on Energy, Environment and Water in Delhi, and Lancaster House in London. The report considers: Future Climate Change. Key Points Continued emissions of greenhouse gases will lead to further climate changes. 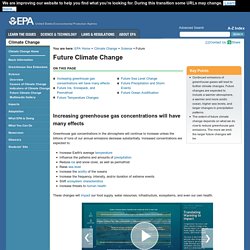 Future changes are expected to include a warmer atmosphere, a warmer and more acidic ocean, higher sea levels, and larger changes in precipitation patterns. The extent of future climate change depends on what we do now to reduce greenhouse gas emissions. The more we emit, the larger future changes will be. Increasing greenhouse gas concentrations will have many effects. Climate change and human health: present and future risks. Review a National Centre for Epidemiology and Population Health, The Australian National University, Canberra 0200, Australiab University of Otago, Wellington School of Medicine and Health Sciences, Wellington, New Zealand Available online 9 February 2006 Choose an option to locate/access this article: Check if you have access through your login credentials or your institution Check access Get rights and content Summary There is near unanimous scientific consensus that greenhouse gas emissions generated by human activity will change Earth's climate. 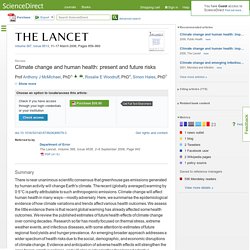