Why is Sleep Important?

Get More Sleep. Insomnia has reached epidemic proportions. It’s estimated to be the #1 health-related problem in America. More than 1/3 of Americans have trouble sleeping every night, and 51% of adults say they have problems sleeping at least a few nights each week. 43% of respondents report that daytime sleepiness interferes with their normal daytime activities. These problems are getting worse, not better. The number of adults aged 20 to 44 using sleeping pills doubled from 2000 to 2004, and the number of kids ages 1-19 who take prescription sleep remedies jumped 85% during the same period.

Lack of Sleep, Too Much Sleep, and Health Problems 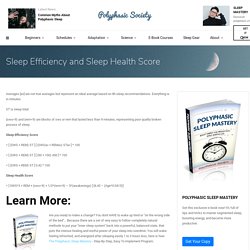 Everything is in minutes. Ghrelin and Sleep. Leptin and ghrelin are two key peptide hormones which regulate energy metabolism via appetite modulation. 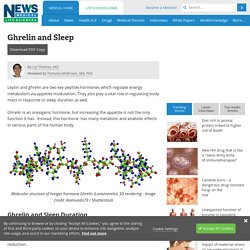 They also play a vital role in regulating body mass in response to sleep duration as well. Ghrelin is an orexigenic hormone, but increasing the appetite is not the only function it has. Instead, this hormone has many metabolic and anabolic effects in various parts of the human body. Molecular structure of hunger hormone Ghrelin (Lenomorelin) 3D rendering - Image Credit: Raimundo79 / Shutterstock. Biological Basis for Less Sleep with Age. Culprit may be the death of a specific cluster of brain cells that regulates sleep patterns. 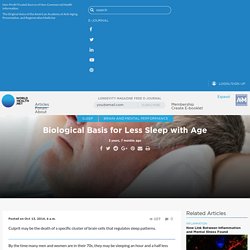 By the time many men and women are in their 70s, they may be sleeping an hour and a half less than they did when they were in their 20s. Upon waking, they often are not well rested, and are tired during the day. Clifford Saper, from the Beth Israel Deaconess Medical Center (Massachusetts, USA), and colleagues identified in a lab animal model that a specific cluster of neurons associated with regulating sleep patterns – the ventrolateral preoptic nucleus, may slowly die off as you get older; as a result, “profound insomnia” may develop.

The researchers then assessed a dataset of almost 1,000 subjects (mean age at death 89.2 years; 71% female; 12 with Alzheimer's disease) enrolled in the Rush Memory and Aging Project. Of these study participants, the team examined 45 brains, based on whether or not the ventrolateral preoptic nucleus was still intact. 21 Health Benefits of Sleep, with Mechanisms and References. The Freakonomics of Sleep (Part 1) On July 28, 2015 at 8:15 pm Over the last few years, a discussion on sleep has emerged into popular consciousness, largely due to an increasing literature base showing its importance, and the media’s willingness to write about these findings. 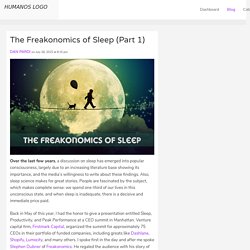 Also, sleep science makes for great stories. People are fascinated by the subject, which makes complete sense: we spend one-third of our lives in this unconscious state, and when sleep is inadequate, there is a decisive and immediate price paid. Valtsu's: Circadian rhythms, sleep and health. 1. 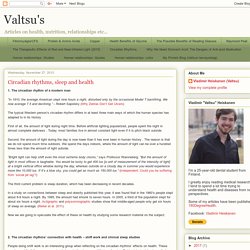 The circadian rhythm of a modern man “In 1910, the average American slept nine hours a night, disturbed only by the occasional Model T backfiring. We now average 7.5 and declining.” – Robert Sapolsky (Why Zebras Don’t Get Ulcers) The typical Western person’s circadian rhythm differs in at least three main ways of which the human species has adapted to in its history First of all, the amount of light during night time.

Second, the amount of light during the day is now lower than it has ever been in human history . “Bright light can help shift even the most extreme body clocks,” says Professor Roenneberg. The third current problem is sleep duration, which has been decreasing in recent decades. The State of the Art in Sleep and Aging (Guest Bryce Mander, Ph.D. – UC Berkeley) Leading Stanford Researcher on Fatigue, Sleep Issues and Circadian Biology. Dr Zeitzer is extremely knowledgeable in areas such as sleep, fatigue and circadian rhythms. 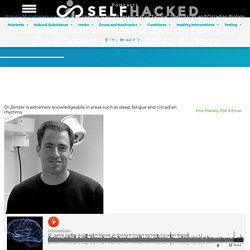 Dr Zeitzer is a beast when it comes to publishing, especially about topics I’m interested in. I found Dr Zeitzer when I was searching for the top researchers at Stanford on circadian biology. After looking through what he’s published, I knew he’d be a wealth of knowledge. This interview isn’t necessarily about health, as Dr Zeitzer isn’t an alternative health guy. But it’s what drew me to him in the first place; he’s simply a good scientist (and also pretty skeptical). In order to make the right health moves, we need the most recent science – and the best way to get that science is straight from the source. Dr. As is the case for most of my interviews (I recorded this about 4 months ago), I have found that some his ideas had significant impact on me.

However, during the interview, you’ll hear some significant pushback on some of his opinions.