Lack of Sleep, Too Much Sleep, and Health Problems

How Shift Work Impacts Your Health. Shift work is a really interesting topic. I talked about it a little bit in my book, and it’s something that there’s a growing awareness of, thankfully. Twenty percent now of the industrialized population around the world works beyond normal hours in various types of shift work or flexible work. The days of just 9-to-5 work for everybody, if those days ever existed, are definitely gone, and this kind of shift work or flex-scheduling work is becoming increasingly common. In this episode, we cover: 5: 28 How shift work impacts your health 16:52 How to mitigate the effects of shift work 25:32 How to schedule your day off Podcast: Play in new window | Download Subscribe: Apple Podcasts | Android | Full Text Transcript: Steve Wright: Hey, everyone.

Chris Kresser: It’s actually water, but I did have coffee this morning. Steve Wright: Good. Chris Kresser: Oh, right. Steve Wright: And today’s a pretty special day for you, right? Sleep Deprivation in Kids and Teens: A Real Cause for Concern. How Shift Work Impacts Your Health. Sensory Processing Disorder & Sleep - What to Know and How to Help. Sleep is a critical activity that promotes self-regulation. Without a good night’s sleep, it’s likely that you’ll be irritable, inattentive, disorganized, and a bit more dysregulated the next day.

When it comes to sensory processing disorder, it can be a common occurance for children to also have sleep issues. Whether it’s a recurring problem or not, these symptoms of sleep deprivation can often mimic and compound the behavioral observations of children with attention deficit disorder, autism, and sensory processing disorder. For more information on the relationship between ADHD and sleep, check out our article here. What is Sensory Processing Disorder (SPD)? Sensory Integration is the process your central nervous system goes through when it takes information in from your body’s 8 senses, processes that information, and then responds accordingly. Most Common Symptoms of Sleep Deprivation. Sleep deprivation, whether it occurs over the short or long term, can lead to some characteristic symptoms. 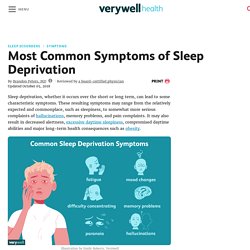 These resulting symptoms may range from the relatively expected and commonplace, such as sleepiness, to somewhat more serious complaints of hallucinations, memory problems, and pain complaints. It may also result in decreased alertness, excessive daytime sleepiness, compromised daytime abilities and major long-term health consequences such as obesity. Too Much Sleep May Be Just As Bad As Not Enough. Results from the world’s largest sleep study have concluded between 7-8 hours of sleep is the ideal amount for optimal cognitive performance; and convincingly showed that too much sleep is correlated with similar cognitive deficits that are associated with not enough sleep, as published in the journal Sleep. 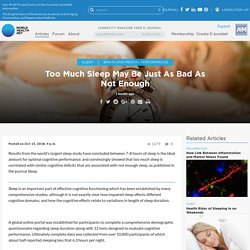 Sleep is an important part of effective cognitive functioning which has been established by many comprehensive studies, although it is not exactly clear how impaired sleep affects different cognitive domains, and how the cognitive effects relate to variations in length of sleep duration. A global online portal was established for participants to complete a comprehensive demographic questionnaire regarding sleep duration along with 12 tests designed to evaluate cognitive performance.

Ultimately complete data was collected from over 10,000 participants of which about half reported sleeping less that 6.3 hours per night. Chronic Sleep Disruption Alters Gut Microbiota, Induces Systemic and Adipose Tissue Inflammation and Insulin Resistance in Mice. What Happens When You Don’t Sleep for Days. All-night study sessions, important business deals, new babies — most people will experience a taste of sleep deprivation at some point in life. 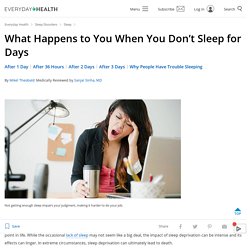 How Losing Sleep Affects Your Body and Mind - Sleep.Org. If you’ve been skimping on sleep to get more done during your waking hours, you may be fooling yourself if you think you’re getting away with it. 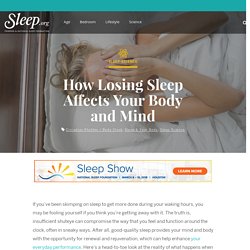 The truth is, insufficient shuteye can compromise the way that you feel and function around the clock, often in sneaky ways. After all, good-quality sleep provides your mind and body with the opportunity for renewal and rejuvenation, which can help enhance your everyday performance. Here’s a head-to-toe look at the reality of what happens when you cheat on sleep. Your mind won’t function optimally. Sleep is critical for the formation and consolidation of memories—and for your ability to retrieve them while you’re awake. Your mood can take a nosedive. Your reaction time may suffer. You can end up looking bad. Your heart can suffer. Your appetite can go into overdrive. Your immune system will take a hit. Sleep and Disease Risk: Scarier than Zombies!

Health Risks of Sleeping in on Weekends. Research finds that social jet lag, which occurs when you go to bed later and wake up later on weekends than during the week, is associated with negative health outcomes. 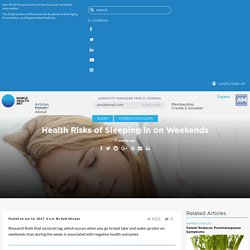 What is “social jet lag”? That occurs when you purposely go to bed later and wake up later on the weekends compared with during the week. It has been found to be associated with increased sleepiness, fatigue, being in a worse mood, and poorer health consequences. Every hour is also associated with an 11 percent increase in the possibility of heart disease. Too Much Sleep May Be Just As Bad As Not Enough.

Sleep and the Brain. COPD and Sleep - Sleep.Org. At first, it isn’t immediately obvious how chronic obstructive pulmonary disease (COPD) can have an impact on slumber. 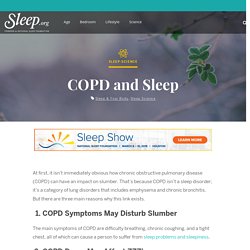 That’s because COPD isn’t a sleep disorder; it’s a category of lung disorders that includes emphysema and chronic bronchitis. But there are three main reasons why this link exists. COPD Symptoms May Disturb Slumber The main symptoms of COPD are difficulty breathing, chronic coughing, and a tight chest, all of which can cause a person to suffer from sleep problems and sleepiness. Could ADHD Be A Sleep Problem? It is estimated that 75% of individuals regardless of age that are diagnosed with attention deficit hyperactivity disorder also have sleep issues. 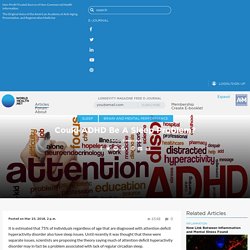 Until recently it was thought that these were separate issues, scientists are proposing the theory saying much of attention deficit hyperactivity disorder may in fact be a problem associated with lack of regular circadian sleep. Extensive research shows that individuals with attention deficit hyperactivity disorder also typically exhibit sleep problems. This study takes the association to the next logical step by pooling all works together to analyze leading the researchers to say that based on existing evidence it is highly likely that ADHD and circadian problems are intertwined in the majority of patients.

Thyroid/Sleep Connection. Hypothyroidism and Sleep Problems Overlap - Wellness Resources. What the Duration of Your Sleep Can Tell You About Your Immune System. Daytime Sleepiness, Long Naps Linked to Heart Risks: Study. Please note: This article was published more than one year ago. 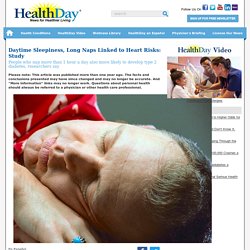 The facts and conclusions presented may have since changed and may no longer be accurate. And "More information" links may no longer work. Questions about personal health should always be referred to a physician or other health care professional. En Español THURSDAY, March 24, 2016 (HealthDay News) -- While getting enough sleep is key to health, a new study suggests that long daytime naps may not be doing your heart any favors. The researchers found that long naps and excessive daytime sleepiness were associated with an increased risk for a combination of health problems that are collectively known as metabolic syndrome. Metabolic syndrome includes conditions such as high blood pressure, high cholesterol, high blood sugar and excess fat around the waist. The investigators analyzed the findings of 21 studies that included a total of more than 307,000 people.