Understanding spatial relations of gut bacteria in ulcerative colitis patients — The American Microbiome Institute. To sample the microbial communities in the gut, fecal samples are generally collected from an individual and DNA is sequenced to identify bacteria that are present. 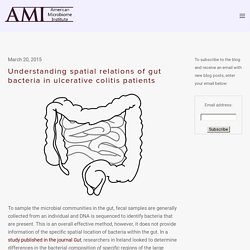 Specific bacteria implicated with microscopic colitis — The American Microbiome Institute. Microscopic colitis (MC) is a disease which is characterized by chronic diarrhea and an increase in the immune cells characteristic of inflammation in the colon, but an otherwise healthy looking colon based on a colonoscopy. 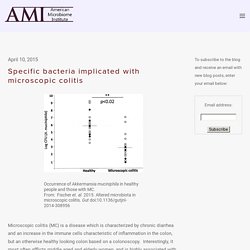 Interestingly, it most often afflicts middle aged and elderly women, and is highly associated with smoking. Sialic acid may be key carbohydrate responsible for inflammation and dysbiosis in the gut — The American Microbiome Institute. Our diet is full of various carbohydrates, composed of different monosaccharides and polysaccharides. 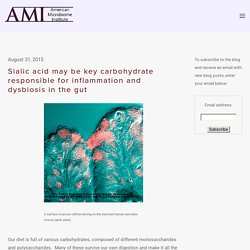 Many of these survive our own digestion and make it all the way to the colon where they modulate our microbiome. Another source of saccharides for our gut bacteria is the mucous that we produce, which can be a rich source of fucose or sialic acid. Sialic acid has been implicated in many inflammatory diseases, such as bacterial vaginosis. Last week, researchers from Switzerland showed that sialic acid may play a critical role in colitis, at least in one colitis model commonly used in mice.

They published their results in Nature Communications. One way to induce intestinal inflammation in mice is to feed them dextran sodium sulfate (DSS). Interestingly, the E. coli cannot actually access the sialic acid from mucins, but instead need other bacteria, such as Bacteroides vulgatus to cleave and release the sialic acid from the mucins in order to access it. Vitamin D and the Microbiome. In my last post, one of the studies had a surprise — Vitamin D supplementation alters the microbiome. 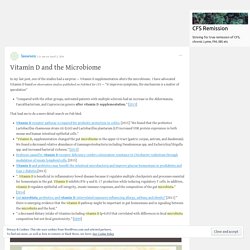 I have advocated Vitamin D based on observation studies published on PubMed for CFS — “it improves symptoms, the mechanism is a matter of speculation” “Compared with the other groups, untreated patients with multiple sclerosis had an increase in the Akkermansia, Faecalibacterium, and Coprococcus genera after vitamin D supplementation.” [2015] That lead me to do a more detail search on Pub Med. New therapeutic avenues in ulcerative colitis: thinking out of the box. Abstract Ulcerative colitis (UC) is a chronic idiopathic inflammatory disease of the gastrointestinal tract that affects the mucosal lining of the colon. 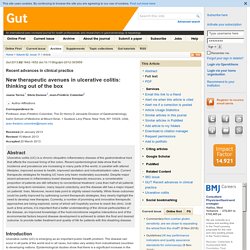 Recent epidemiological data show that its incidence and prevalence are increasing in many parts of the world, in parallel with altered lifestyles, improved access to health, improved sanitation and industrialisation rates. Current therapeutic strategies for treating UC have only been moderately successful. Despite major recent advances in inflammatory bowel disease therapeutic resources, a considerable proportion of patients are still refractory to conventional treatment. Less than half of all patients achieve long-term remission, many require colectomy, and the disease still has a major impact on patients’ lives. Introduction. 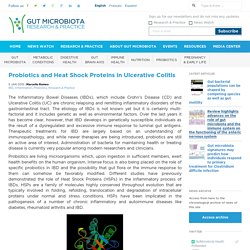 The etiology of IBDs is not known yet but it is certainly multi-factorial and it includes genetic as well as environmental factors. Over the last years it has become clear, however, that IBD develops in genetically susceptible individuals as the result of a dysregulated and excessive immune response to luminal gut antigens.

Therapeutic treatments for IBD are largely based on an understanding of immunopathology, and while newer therapies are being introduced, probiotics are still an active area of interest. Administration of bacteria for maintaining health or treating disease is currently very popular among modern researchers and clinicians. Probiotics are living microorganisms which, upon ingestion in sufficient members, exert health benefits on the human organism. Yogurt may help combat colitis — The American Microbiome Institute. Editor's note: The following work comes out of Wendy Garrett's lab at Harvard. 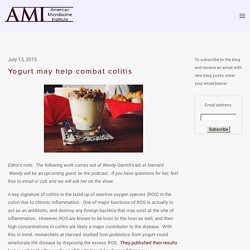 Wendy will be an upcoming guest on the podcast. If you have questions for her, feel free to email or call, and we will ask her on the show. A key signature of colitis is the build-up of reactive oxygen species (ROS) in the colon due to chronic inflammation. One of major functions of ROS is actually to act as an antibiotic, and destroy any foreign bacteria that may exist at the site of inflammation.

However, ROS are known to be toxic to the host as well, and their high concentrations in colitis are likely a major contributor to the disease. Fecal microbiota transplant as a treatment for MRSA enterocolitis — The American Microbiome Institute. Fecal microbiota transplants (FMTs) are most commonly used for treating Clostridium difficile infection, an often lethal bacterial infection of the gut. 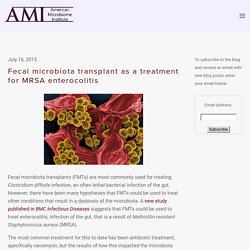 However, there have been many hypotheses that FMTs could be used to treat other conditions that result in a dysbiosis of the microbiota. A new study published in BMC Infectious Diseases suggests that FMTs could be used to treat enterocolitis, infection of the gut, that is a result of Methicillin-resistant Staphylococcus aureus (MRSA). The most common treatment for this to date has been antibiotic treatment, specifically vanomycin, but the results of how this impacted the microbiota were not measured.

SER-287 (SERES-101 study) Ulcerative colitis is a chronic inflammatory condition of the colon, leading to episodes of bloody diarrhea and urgency. 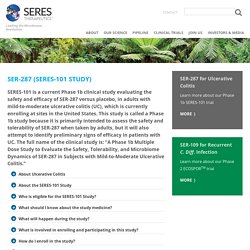 The disease mostly affects young and middle-aged individuals. The cause of ulcerative colitis is largely unknown. While genetic factors contribute to disease risk, an abnormal relationship between the immune system and intestinal bacteria may also play a role in triggering the disease. In several previously reported studies, some UC patients with mild-to-moderate disease administered bacteria through fecal microbiota transplant from a healthy donor experienced improvements in their UC symptoms, suggesting that changes in the bacteria may contribute to this clinical response.