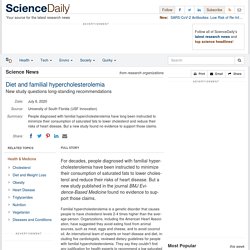 But a new study published in the journal BMJ Evidence-Based Medicine found no evidence to support those claims. Familial hypercholesterolemia is a genetic disorder that causes people to have cholesterol levels 2-4 times higher than the average person. Organizations, including the American Heart Association, have suggested they avoid eating food from animal sources, such as meat, eggs and cheese, and to avoid coconut oil. An international team of experts on heart disease and diet, including five cardiologists, reviewed dietary guidelines for people with familial hypercholesterolemia. They say they couldn't find any justification for health experts to recommend a low saturated fat diet. The Cholesterol Controversy. Two bags of fresh frozen plasma. 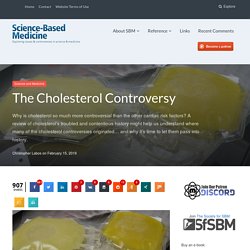 The bag on the left was obtained from a patient with hypercholesterolemia, and is cloudy with undissolved cholesterol particles. A recent article in The Guardian raised an interesting question. Is cholesterol denialism a valid form of skepticism or pseudoscience? Is there valid debate surrounding the benefit of cholesterol medication or is the evidence and the scientific consensus clearly on one side of the issue? It is true that we argue about cholesterol far more than the other cardiovascular risk factors. First off, we should acknowledge that there in fact has been a controversy on almost all these issues at some point. Get it out of your heads, if possible, that high pressure is…the feature to treat.– William Osler, 1912 address to Glasgow Southern Medical Society Hypertension may be an important compensatory mechanism which should not be tampered with, even were it certain that we could control it.– Dr. 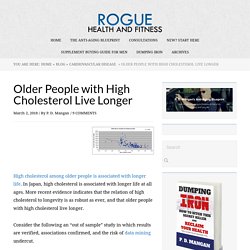 In Japan, high cholesterol is associated with longer life at all ages. More recent evidence indicates that the relation of high cholesterol to longevity is as robust as ever, and that older people with high cholesterol live longer. Consider the following an “out of sample” study in which results are verified, associations confirmed, and the risk of data mining undercut. Cholesterol and mortality A newly published study looked at 3090 adults aged 60 and up in the Swedish National study on Aging and Care. The results: Lowering Cholesterol. The Most Important Blood Marker for Health and Longevity is Not Cholesterol! It’s not cholesterol! 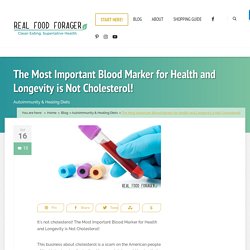 The Most Important Blood Marker for Health and Longevity is Not Cholesterol! This business about cholesterol is a scam on the American people of the highest order. I’m inclined to completely avoid having that cholesterol test at this point. The real problem comes from a diet saturated with processed foods and hidden sugars. However, it is very easy to monitor your true health with this simple blood test.

What Are the Causes of Heart Disease and Does Cholesterol Cause Heart Disease? Oh god, my hands are trembling just t-t-t-t-t-typing the word “cholesterol.” 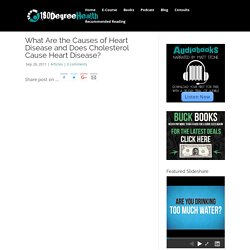 It’s so scary. It is one of the definitive words of an aging, hospital-ridden, overweight baby boomer. The Truth About Cholesterol. A Whole9 guest post by Dr Sult, medical doctor, medical educator, inspirational speaker & the author of Just Be Well: A Book For Seekers of Vibrant Health. 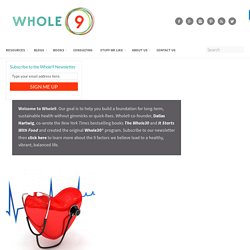 After you finish this article, read part 2 in this series on Cholesterol. The Inside Story on Cholesterol Looking to lower your risk of heart disease? Conventional wisdom says you should exercise regularly, eat well and keep your cholesterol levels in the recommended range. Sounds simple, right? Not so much. Cholesterol is NOT the Enemy - Dr. Spencer Nadolsky. Before I get into Part 2 of my switch from high fat / low carb to high carb / low fat, I want to go over a quick little tid bit about something that has been bothering me lately on the internet. 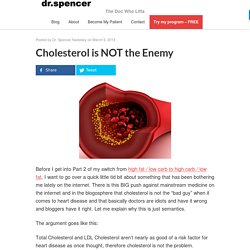 There is this BIG push against mainstream medicine on the internet and in the blogosphere that cholesterol is not the “bad guy” when it comes to heart disease and that basically doctors are idiots and have it wrong and bloggers have it right. Let me explain why this is just semantics. The argument goes like this: Total Cholesterol and LDL Cholesterol aren’t nearly as good of a risk factor for heart disease as once thought, therefore cholesterol is not the problem. Here is the problem: LDL Cholesterol is just a surrogate marker for the actual risk factor, which are apo B containing lipoproteins. With advanced lipid testing, you can actually measure the amount of apo B and/or the lipoprotein particle number. If you want to learn more about this particle test, checkout the official website. A Functional Perspective on Diet and Cholesterol - Kresser Institute. The REAL Cause of Heart Disease is NOT Cholesterol!

The real cause of heart disease is not cholesterol! 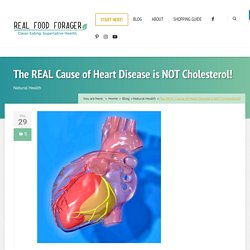 There are other, more pertinent factors that must be considered. Fred Kummerow, a 98-year-old researcher and emeritus professor of comparative biosciences at the University of Illinois, argues that dietary cholesterol is good for your heart. He has spent more than six decades studying the dietary factors that contribute to heart disease. The Cholesterol Myth - Primal Body Primal Mind. (Why it’s NOT a good idea to shoot the firemen that come to put out the fire!)

Lipitor and other Statin drugs have become BIG BUSINESS to “Big Pharma” nowadays. For roughly half a century now cholesterol-a naturally occurring substance in your body and in many animal-source foods humans have eaten consistently for roughly 2.6 million years-has become both “Public Enemy #1” and the favorite whipping boy of the medical establishment. “High serum cholesterol” has been consistently blamed unquestioningly for the skyrocketing levels of heart disease and stroke. Everyone seemingly trembles with fearful anticipation of the sinister cholesterol levels revealed by the blood chemistry reports given by doctors during annual physicals. “Give it to me straight, doc….What’s my cholesterol?” Before you go dutifully marching to your pharmacist with the prescription from your doctor marked “RUSH!” Cholesterol is a vital, naturally occurring substance in the human body. Doctor Admits Huge Mistake: The Cholesterol Lie Part 1. Doctor Admits Huge Mistake: The Cholesterol Lie Part 2. 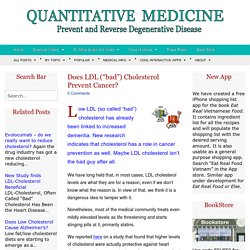 Marathon has gotten a decades old muscular dystrophy drug, deflazacort, approved and is charging $89,000 a year for it. It’s price in Europe is under $1500/year. Where are the free market forces? Why aren’t our elected officials protecting us from this egregious practice? Lowest Stroke Rates in Older Baby Boomers; Younger People Rising– 9/12/16 reports the American Heart Association, here. Sugar Lobby Promotes Sugar– 11/13/16 Surreal. Zika Breakthrough– 8/30/16 Reported here and elsewhere, two existing (already approved) drugs appear to be effective against Zika. AHA Limits Added Sugar– 8/17/16 A sensible recommendation from the American Heart Association limits sugar for children aged 2-18 to fewer than 6 teaspoons a day. Calcium Supplements Linked to Dementia– 8/17/16 A report in the journal Neurology, here, links calcium supplements to dementia in some groups of women.

Big Pharma to World: Take Something! LDL Cholesterol Function, Normal Levels + 41 Ways to Lower Naturally. LDL Particle Size and a High Fat Diet. The Truth About Cholesterol, Part 2: Lowering Your LDL. The Amazing New World of HDL Cholesterol. Is Good Cholesterol Overrated? How to Make Your HDL Work Better. For years, we’ve heard that there are two primary types of cholesterol on a standard lipid panel that really matter for heart health. 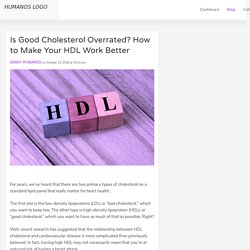 The first one is the low-density lipoproteins (LDL) or “bad cholesterol,” which you want to keep low. The other type is high-density lipoprotein (HDL), or “good cholesterol,” which you want to have as much of that as possible. Right? Well, recent research has suggested that the relationship between HDL cholesterol and cardiovascular disease is more complicated than previously believed. In fact, having high HDL may not necessarily mean that you’re at reduced risk of having a heart attack. In this blog post, we’ll take a closer look at the important nuance in the HDL discussion, and describe how to keep yours functional. What do we really mean by ‘cholesterol?’ Let’s get a better understanding of what cholesterol really means when we discuss heart disease risk. As you probably know, the human body is mostly water (around 60%).

There are a few different types. 'Good cholesterol' may not always be good. Lower Triglycerides Through Diet. Having high levels of triglycerides appears to be one of the leading risk factors for heart disease. An even better indicator is looking at a ratio of triglycerides to HDL cholesterol. A ratio of 3:1 or higher tells us far more about a person’s risk of developing heart disease than any other diagnostic lab value.

The higher the triglycerides, the higher the value, and the higher the statistical chance of getting heart disease. The causes of high triglycerides is a short list made up mostly of fructose, as well as fructose, and also fructose. Okay, and alcohol too. Low Cholesterol and Suicide (Again) Source: wikipedia The human brain needs a lot of cholesterol to wrap around nerves, to serve as components of cell membranes, and to aid in the communication between neurons. While cardiologists have been racing to lower serum cholesterol more and more (and drug companies keep coming up with fancy new cholesterol-lowering drugs (link is external)*), the importance of cholesterol in the brain relative to cholesterol and heart health has been mostly ignored.

Low Cholesterol Levels Are Worse Than High? Most of us have been led to believe that cholesterol is the culprit behind rising rates of heart disease. For over 60 years, we’ve been getting the message that lowering fat and cholesterol (especially our ingestion of animal fats), and using vegetable oil and other substitutes in our diet will protect us from heart disease. This could not be further from the truth.