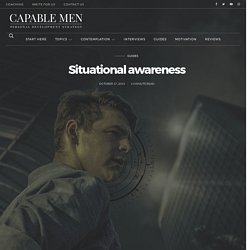 A practical resource for beginners and security professionals alike. Introduction to Situational Awareness. Everything You Need to Know about The Internet of Things. Art of the Steal: On the Trail of World’s Most Ingenious Thief. The plane slowed and leveled out about a mile aboveground. 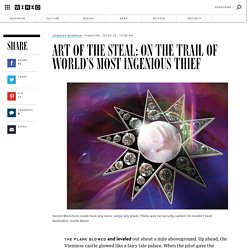 Up ahead, the Viennese castle glowed like a fairy tale palace. When the pilot gave the thumbs-up, Gerald Blanchard looked down, checked his parachute straps, and jumped into the darkness. He plummeted for a second, then pulled his cord, slowing to a nice descent toward the tiled roof. It was early June 1998, and the evening wind was warm. If it kept cooperating, Blanchard would touch down directly above the room that held the Koechert Diamond Pearl.

A couple of days earlier, Blanchard had appeared to be just another twentysomething on vacation with his wife and her wealthy father. Millennials Infographic. George Hotz Is Taking on Tesla by Himself. George Hotz is taking on Google and Tesla by himself. 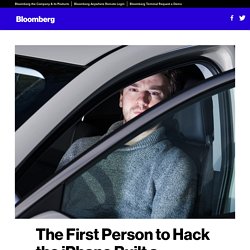 By Ashlee Vance | December 16, 2015 Photographs by Peter Bohler. A Day in the Life of Americans. From two angles so far, we’ve seen how Americans spend their days, but the views are wideout and limited in what you can see. 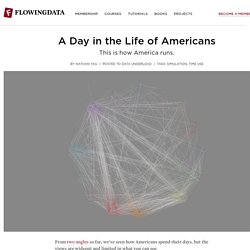 I can tell you that about 40 percent of people age 25 to 34 are working on an average day at three in the afternoon. I can tell you similar numbers for housework, leisure, travel, and other things. It’s an overview. What I really want to see is closer to the individual and a more granular sense of how each person contributes to the patterns. I want to see how a person’s entire day plays out.

So again I looked at microdata from the American Time Use Survey from 2014, which asked thousands of people what they did during a 24-hour period. The Body Electric. Summer skies in the U.S. generate 50,000 lightning flashes per hour. 240 thousand people worldwide are injured by that lightning evey year. 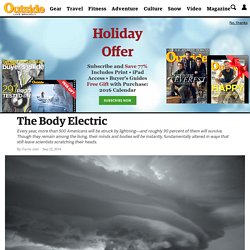 Photo: Mitch Dobrowner Michael Utley does not remember much about his death. Over the years, he has woven together a narrative of what happened using threads collected from witnesses, friends, and family. On May 8, 2000, Utley, a 48-year-old stockbroker, was golfing with his coworkers Dick Gill and Bill Todd, along with their friend Jim Sullivan, in the village of Pocasset, Massachusetts, about three miles south of the Cape Cod Canal. Shortly after lunch, the dark clouds that had been mushrooming in the distance all morning were hovering close enough to merit the bleating of the course’s storm horn—time to clear the green. 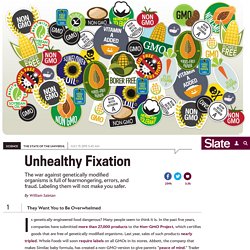 Many people seem to think it is. In the past five years, companies have submitted more than 27,000 products to the Non-GMO Project, which certifies goods that are free of genetically modified organisms. Last year, sales of such products nearly tripled. Whole Foods will soon require labels on all GMOs in its stores.

Abbott, the company that makes Similac baby formula, has created a non-GMO version to give parents “peace of mind.” Some environmentalists and public interest groups want to go further. Will Saletan writes about politics, science, technology, and other stuff for Slate. The central premise of these laws—and the main source of consumer anxiety, which has sparked corporate interest in GMO-free food—is concern about health. I’ve spent much of the past year digging into the evidence.

A Slate Plus Special Feature: In this members-only Slate Plus extra, Will Saletan reads his investigative study of the anti-GMO movement. The GMO Shopping Game. Spurious Correlations. Why Do People Hate Puns? Sometimes in life, I’m just trying to have a little fun with some wordplay, and the people around me aren’t having it. 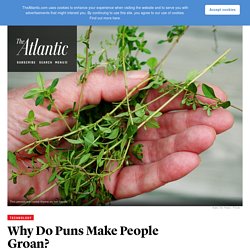 They’d rather have no pun at all. Adult Coloring Books and the Rise of the “Peter Pan” Market. In 2011, the British publishing house Laurence King asked Johanna Basford, a Scottish artist and commercial illustrator specializing in hand-drawn black-and-white patterns for wine labels and perfume vials, to draw a children’s coloring book. 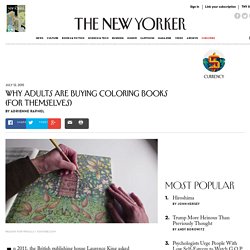 Basford suggested instead that she draw one for adults. For years, she told her publishers, her clients had loved to color in her black-and-white patterns. The publishers were convinced, and ultimately ordered an initial print run for “Secret Garden: An Inky Treasure Hunt and Coloring Book” of thirteen thousand copies.