Meet the woman behind the English metro announcements. “The next station is Deák Ferenc tér… change here for metro lines M2 and M3…” We all recognise that soothing female voice guiding us around Budapest’s transport system in English. 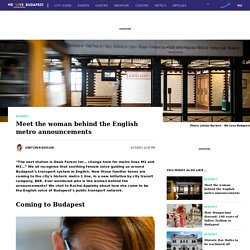 Now those familiar tones are coming to the city's historic metro 1 line, in a new initiative by city transit company, BKK. Ever wondered who is the woman behind the announcements? We chat to Rachel Appleby about how she came to be the English voice of Budapest’s public transport network. Coming to Budapest Rachel first came to Budapest in 1990 with her boyfriend at the time. After several years of teaching English at International House in Budapest, Rachel accepted a teaching position at ELTE. The woman behind the metro Due to the ever-changing nature of the Budapest public transportation – think the ongoing metro 2 construction and replacement buses – Rachel usually does recordings every three or four weeks, in a studio. Test - Factfulness Quiz. Leave no dark corner - ABC News (Australian Broadcasting Corporation) World Regret Survey. WindowSwap. Category: PICTURE OF THE DAY » TwistedSifter.

TwistedSifter The Best of the visual Web, sifted, sorted and summarized Category: PICTURE OF THE DAY Nov 24, 2020 The Paths of 800 Unmanned Bicycles Being Pushed Until They Fall Over The art of science Read More » Nov 22, 2020 To Get the City to Fix the Pothole on His Street He Sent This Photo of His Son Human for scale Read More » Nov 16, 2020 This Artist Tattoos Eyebrows for Clients with Alopecia The technique is known as microblading Read More » Nov 4, 2020 There are 10 Million Stars in this Photo Yes it’s zoomable Read More » Nov 3, 2020 Tony Hawk Went as Larry David for Halloween and It’s Pretty Good Pretty, pretty, pretty good Read More » Oct 29, 2020 This is a Vaquita. 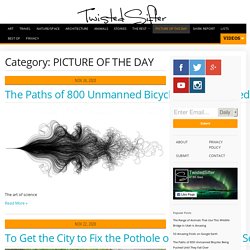 Vaquita is spanish for “Little Cow” Read More » Oct 19, 2020 Giant Cat Etched Into Peruvian Hillside Believed to Be Over 2,000 Years Old Archaeologists discovered the giant cat ‘geoglyph’ at the historic Nazca Lines Read More » Oct 15, 2020 75 Years Ago, Japan Surrendered and Canada Signed in the Wrong Place They said they were sorry. For World Teachers' Day, A Look At What Classrooms Look Like Across The Globe. Improve your English pronunciation using YouTube. 12 Museums From Around the World That You Can Visit Virtually.

Biography. A Question A Day - Vidéos. Here’s What Iconic Historical Figures Would Look Like Today - LuxurList. 1. 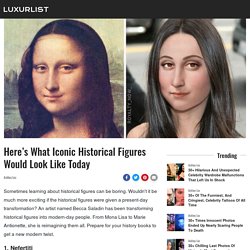 Nefertiti Nefertiti was an Egyptian queen who was known for her role in the religious revolution. She had many nicknames, including "Lady of all Women. " Maybe she was the first feminist icon. Her updated look sticks with the ancient Egyptian style through her dark cat eyeliner. 2. As a Roman dictator, Julius Caesar played a critical role in the demise of the Roman Republic and the rise of the Roman Empire. Despite the fact that he was a dictator, he looks like a handsome man based on his modern-day transformation. 3.

Queen Elizabeth I was the daughter of Anne Boleyn and Henry VIII (both on our list). She once said, "God forgive you, but I never can. " 4. Alexander the Great was the king of the ancient Greek kingdom of Macedon. Based on his modern-day picture, he was a handsome fellow and would be a great inspiration for a Disney prince. 5. Agrippina was a roman empress and one of the more prominent women in the Julio-Claudian Dynasty. 6. 7. 8. 9. 10. 11. 12. 13. "Let them eat cake! " Gift of Gab: 15 Memorable Speeches in English for Listening and Speaking Practice. Lions roar. 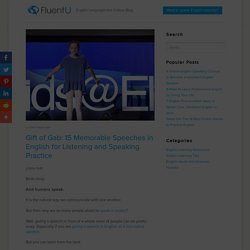 Birds chirp. And humans speak. It is the natural way we communicate with one another. But then why are so many people afraid to speak in public? Well, giving a speech in front of a whole room of people can be pretty scary. But you can learn from the best. You can watch videos of famous, effective speeches in English to learn how to do it the right way. You will learn a lot of important English language and culture lessons while you are at it! In this post we will share 15 amazing speeches in English that you can use to become a more confident, powerful speaker yourself. Download: This blog post is available as a convenient and portable PDF that you can take anywhere. Speech on Kindness by a 10-year-old Girl Level: Beginner Do you think people should be kind to one another?

This is a perfect informative speech for beginner English learners. This speech is perfect for listening practice. “The Effects of Lying” by Georgia Haukom “Education for All” by Cameron Allen Level: Intermediate.