A Question A Day - Vidéos 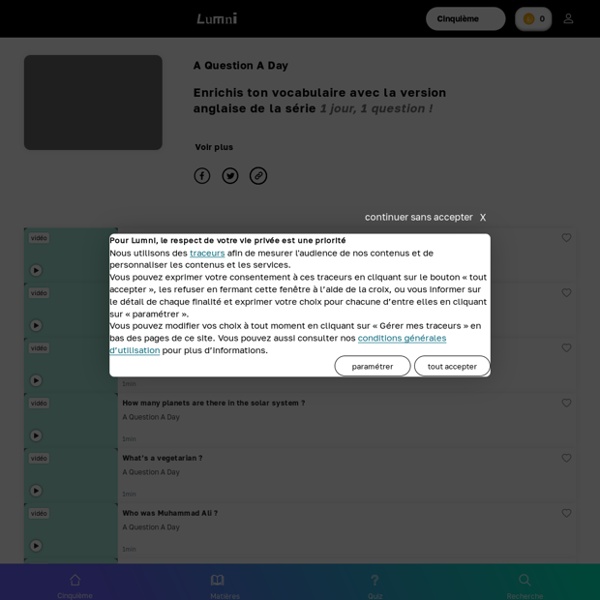 Category: PICTURE OF THE DAY » TwistedSifter TwistedSifter The Best of the visual Web, sifted, sorted and summarized Category: PICTURE OF THE DAY 12 songs to practice the pronunciation of -ED endings - Luiz Otávio Barros As you know, the “-ed” endings of regular past tense verbs can be pronounced in three different ways: /t/, /d/ and /ɪd/, which is the one most students tend to overuse. Click here for an overview of the rules. Over the years, I have found that /t/ and /d/ are easier to notice and to produce if the verb comes immediately before a word beginning with a vowel sound: liked it – /laɪktɪt/dreamed of – /driːmdəv/ To help students get their tongues around the two sounds, I usually ask them to move /t/ and /d/ to the front of the vowel sound. This makes it obvious that there’s no room for /ɪ/:

Audio Books Planet ➤ There was a man who had three sons, the youngest of whom was called Dummling, and was despised, mocked, and sneered at on every occasion.It happened that the eldest wanted to go into the forest to hew wood, and before he went his mother gave him a beautiful sweet cake and a bottle of wine in order that he might not suffer from hunger or thirst... ➤ Grimm's Fairy Tales #01 - The Golden Bird.➤ Please Subscribe, Comment & Rate For Daily Video...➤ Subscribe: Grimm's Fairy Tales:is a collection of German fairy tales first published in 1812 by the Grimm brothers, Jacob and Wilhelm. Reader: Chris Vee

Here’s What Iconic Historical Figures Would Look Like Today - LuxurList 1. Nefertiti Nefertiti was an Egyptian queen who was known for her role in the religious revolution. She had many nicknames, including "Lady of all Women." Maybe she was the first feminist icon. Her updated look sticks with the ancient Egyptian style through her dark cat eyeliner.

british-airways-inflight-video-thandie-newton-gillian-anderson-chiwetel-ejiofor-ian-mckellen-a7849361 There must be stardust in the air. A week after Air New Zealand launched its latest inflight safety video – which swiftly went viral, clocking up 16 million views on YouTube – British Airways has released its star-studded equivalent. The six-minute film runs through the safety instructions for BA flights, as well as introducing their Flying Start charity, which supports Comic Relief. The video – produced in conjunction with the charity – features the likes of Chiwetel Ejiofor, Gordon Ramsay and Gillian Anderson running through the safety demo. Thandie Newton is on hand to explain where the emergency exits are, Rob Brydon demonstrates the use of a lifejacket, and Sir Ian McKellen and Warwick Davis show how to use an oxygen mask. Jim Broadbent, meanwhile, demonstrates how to put his tray table up and down and Rowan Atkinson finishes off the film with some Mr Bean-style capers with the Flying Start donations envelope.

What Foods Kids Eat Around the World in Photos What Kids Eat Around the World In the face of rising global obesity, photographer Gregg Segal traveled around the world to ask kids what they eat in one week and then photographed them alongside the food. Photographs and text by Gregg Segal Gift of Gab: 15 Memorable Speeches in English for Listening and Speaking Practice Lions roar. Birds chirp. And humans speak. It is the natural way we communicate with one another. But then why are so many people afraid to speak in public? Well, giving a speech in front of a whole room of people can be pretty scary.